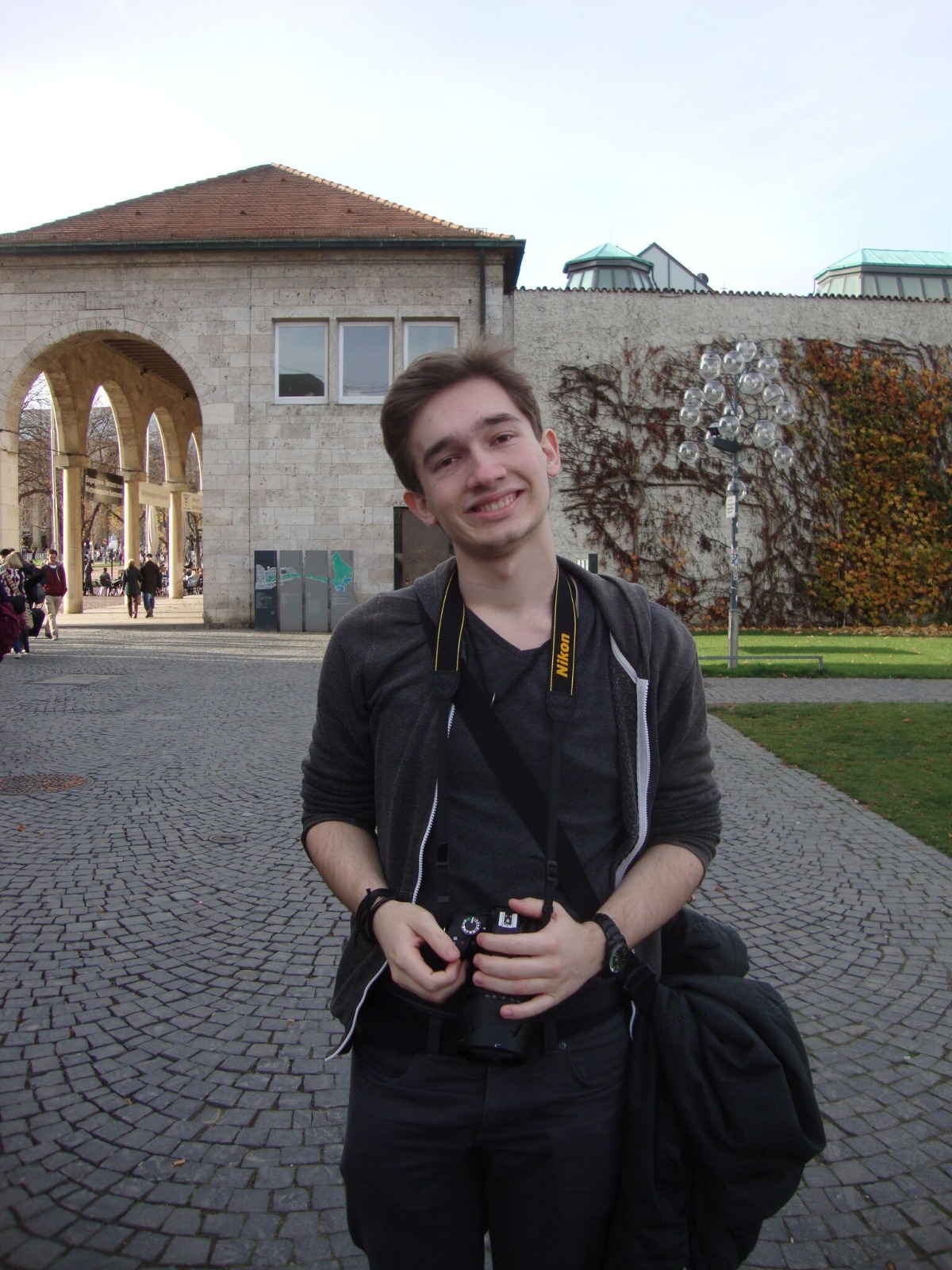 Let’s start this interview off with your favorite song. What is it?

I listen to a lot of different stuff but I really like Jazz or in general more chill music. If you really want to put something on, let’s go with the artist C2C and the track Delta.

I put on the song and start interviewing Sven with some relaxed vibes.

Tell us about yourself! How old are you and what study year are you in?

I am Sven and I am twenty two years old. I just finished my second year. Originally, I am from Krefeld in Germany. The city itself is not super well known but it’s close to Düsseldorf. I also have one bigger sister.

Since I am also German, I got curious about Krefeld and asked some more questions:

How is Krefeld? Do you like it there? Or is it boring?

Well, it’s supposedly a big city but it doesn’t feel big at all. It feels like a really small place actually. To be honest, I don’t really like it that much there.

Krefeld vs Nijmegen. What city wins?

Nijmegen for sure! The city is so much nicer.

I agree with him and continue the interview.

Do you have any pets back home in Krefeld?

I don’t but I would really like to have some pets at one point. Specifically, I like cats. Unfortunately, my sister has a cat hair allergy so we never had a cat.

What things are you into? What do you do in your free time and what are your hobbies?

I really like gaming on my PC. Recently, I also got myself an Oculus Rift and that’s quite some fun.

That’s cool! What games do you play and what are your favorite games?

Usually, I play games like League of Legends but I play all sorts of games. Recently, I got Sekiro which is similar to Dark Souls. I do have to say that I mostly play single player games like RPGs but if I play multiplayer then it’s League. I just got my Oculus so I don’t have a lot of games for it yet.

Regarding my favorite games, Witcher III is for sure in my top three but also Sekiro.

I also really like video games and played Witcher III myself so I ask a couple of follow up questions:

When you play an RPG, do you rush through all the main quests or do you also play the side quests?

I do like to explore the world and I usually take my time. In the past, I never really read flavor texts (back stories, etc.) but I recently started doing it and it’s just so much fun! For Witcher III it’s really good. The writing is great!

Now I am curious, do you usually try to collect all collectibles? Are you a trophy hunter?

No, I am not one of those 100% gamers but perhaps I do it a little bit. So, I guess to a certain degree. I want to see what’s out there but I don’t like going out of my way to do some challenges or achievements.

Alright, interesting! Let’s move back to the interview: Why do you study AI and why here in Nijmegen?

When I finished high school, I knew that I wanted to do something in the direction of computer science or physics. However, I didn’t want to study computer science because it seemed too boring to me. So, I started exploring my options and found AI. When I looked for universities, I found Radboud and I liked the idea of studying abroad. I actually didn’t look around much further after I had found Nijmegen so I just went with it.

Do you have a favorite AI topic?

I don’t necessarily have a favorite AI topic. Initially, I liked the idea of the Singularity and super intelligence but I don’t think that’s something I want to work on specifically. Currently, I have the idea and the hope to work somewhere in the space industry. I don't yet have a clue though how I will do that but that’s the direction.

Did you already look into master programmes regarding that?

Not a lot to be honest. I looked at the master programmes at Radboud but I am not too fond of them. I don’t think that I will do my master here. It will probably not be an AI master. I don’t want to completely move away from AI but I would rather do something that uses AI and apply it. Maybe even towards hardware because I like engineering.

So, I heard that you are really good at Blender and that you are considering to give a Blender workshop. Tell me a bit about it. How did you start with it and why do you like it?

Blender is a 3D modelling and rendering software. I don’t actually remember how I got into it but at one point I saw some random tutorials and it looked like fun so I tried it out. I wouldn’t necessarily say that I am good at it but I am at least not a beginner anymore. I think it’s really cool to create your own object and design your own virtual space.

Did you ever make a movie or animation in Blender? Perhaps a really short one?

No, I haven’t done any animation yet. I mostly focused on rendering images and 3D modeling of objects that I also 3D print sometimes.

Do you have any images online?

No, not yet but I thought about putting some images online. I don’t actually do it often enough although I would like to do it more often. Maybe it would be nice to have a page somewhere where I could upload images every two weeks. That would also be good practice for myself.

At this point I am trying to convince Sven to put some pictures online and to share the link with us.

What scenes do you usually create? Nature scenes or maybe sci-fi?

So far it has been more abstract. So not something you would see in nature. Often it is one particular object that is kind of weird that I then put in a scene which it looks good in.

Now let’s move to some typical CognAC questions. When did you become active in CognAC and why?

I became active right after the introduction week. I went to the first committee market and applied for the SC. Unfortunately, it was full so I got moved to the SymCo which was fine.

In my second year, I joined the LoLCo and finally the SC.

Do you have a favorite committee?

So far it has been the SC because I like the idea of creating workshops that people enjoy and also help them.

Perfect answer for the future Chief of Education! I am very proud.

I think the SymCo was also really cool because we organized such a big event which went quite well.

Are they any committees left on your to-do list?

Yes, I would like to join the PaparaC. I think it goes well together with my interest in Blender because I also have been into photography although I am kind of bad at it.

Now my favorite question (because it’s always a bit awkward): Why do you think you became the AI*? Why did we pick you?

Good one, I really didn’t expect it! When I first heard about the idea of the AI*, I thought it was cool and maybe one day I would become AI* myself. I didn’t expect to become AI* now because it doesn’t feel like I have done that much specifically.

I finally relieve Sven and tell him why we picked him. He was chair of the SymCo in his very first year and did a great job but was never rewarded for it. Additionally, he worked hard for the LCN and also put a lot of effort into SC. He also chaired the SC for the last quarter.

Is there anything in your opinion that CognAC really needs?

I think generally CognAC is in a very good position. I don’t specifically know what CognAC could do more. I don’t have any specific ideas.

I already asked for your favorite music but do you have a favorite movie?

It’s difficult but I think it’s either The Martian or Interstellar. These two movies I really like.

Do you have a life motto?

I think something like: just smile. Maybe it sounds a bit weird but the idea I have behind it is:

if there is nothing that is specifically bad right now or that should make you sad then why don’t you just be happy?

It’s just something I try to follow. If I don’t feel too good but there is not really any reason for it then I just try to be happy. That’s what I try to do.

Do you have a favorite dish? And how do you feel about Dutch food?

Oh really! Why do you like it so much?

I think Japan has a really interesting culture because there are aspects of the very old culture like temples and traditions but then there is also the modern, high-tech world which is so closely connected. In Japan it really happens that there is a really old temple and right next to it there is a skyscraper. This is the kind of stuff that happens in Japan all the time. Not just with buildings. In general, there is such a strong contrast in so many things which makes it really interesting to me. And the food is just great.

Have you ever been there?

Yes, I have been there twice by now. Once for two weeks with a youth group. That was a complete tour. The second time, I went with a friend for a month. The first one and a half weeks we stayed at a family which was really cool. Afterwards we went to a different town where we did voluntary work at festivals for two weeks.

What kind of festivals were those? Music festivals or food festivals?

More general festivals for as an example a public holiday. There are usually a couple of stands where people sell specific food or have some kind of games. Often there are also fireworks at the end. I really liked getting in contact with the natives.

Do you speak the language?

A bit. I do I think I could have gotten away with just speaking English. Not in the family where I first stayed but for the voluntary work I did. Of course, it was still very useful to speak Japanese.

Apart from studying in the Netherlands was that your longest time abroad?

Alright, last question. It’s a personal question in fact. Do you actually dye your hair or is it natural?

No, I do dye it. I usually have it done at the hairdresser in Krefeld because I am home often enough so I just do it there.

Do you have any shout outs before we finish the interview?

Yes, to the SC and the LoLCo. It was great working with them this year. Also to the current board for advising us, the future board and the rest of CognAC!