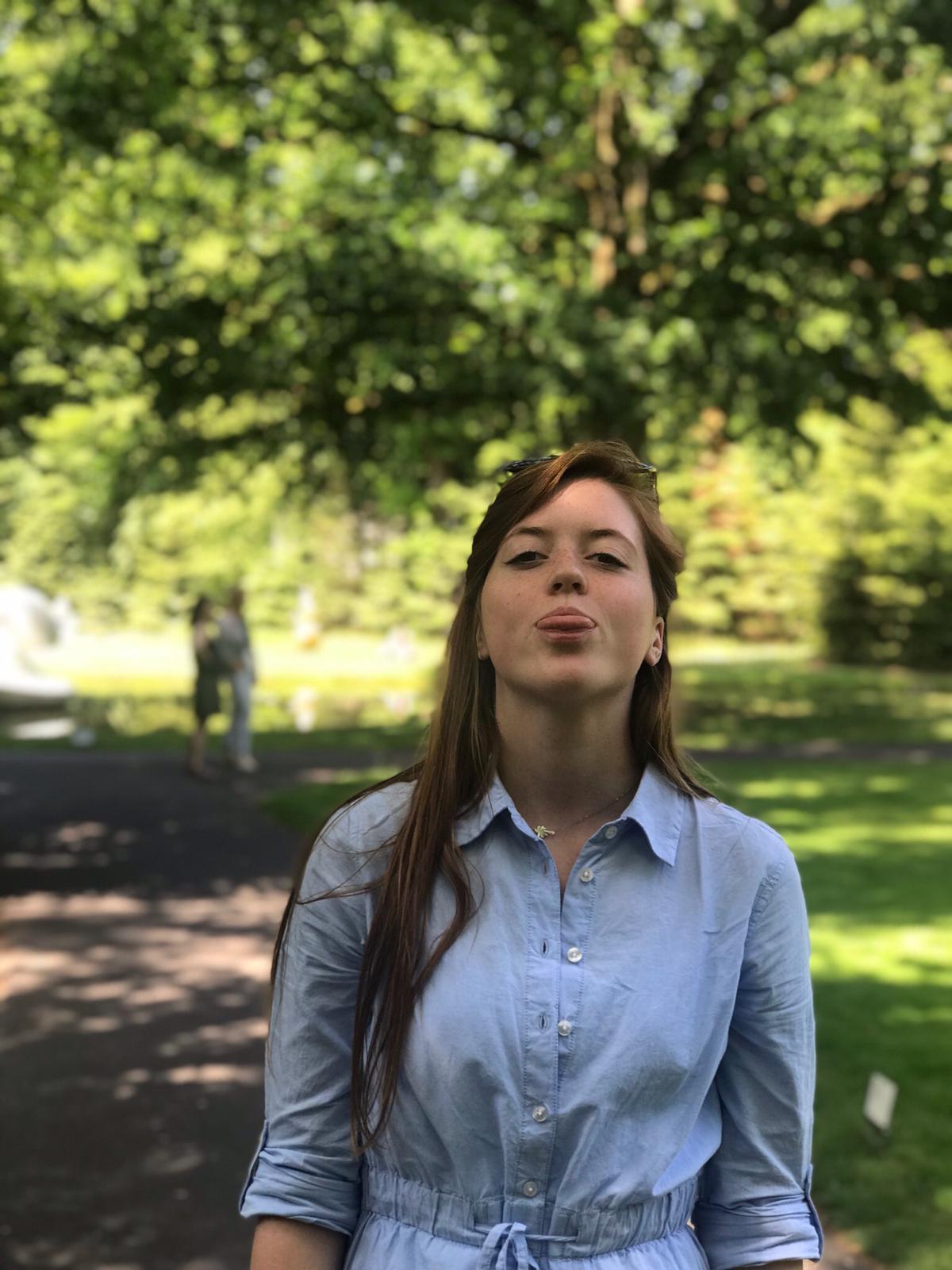 Laura sighs. I did not prepare this at all. Anyway, I am Laura. I am a third year student, but I’m mostly doing second year courses, whoepsie. Last year, I was in the board of the RAGweek. I was board member activities there. What else is interesting about myself?

I come from Wijchen, which is very close. I’m there within 11 minutes by train or something, but that is nice though.

Are you going home then really often?

I guess you go home a little bit easier and your parents can bring you back with the car, which is always a plus. I don’t know how but always if I go home, I have like one bag and then when I want to go back to Nijmegen, I have like three. I don’t get it, but it happens and then my parents are like “ah, that’s sad, you don’t have to go by train with 3 bags.” And they just bring me back. Thanks parents!

Why did you go study in Nijmegen? Was it because you lived so close?

No, I think because I liked the social part about AI here. What I wanted was a study that is not too technical, but still a bit technical. I feel like AI here can offer that, because it is a nice mix between the social and technical part about AI. So that’s why, also because it was pretty close and because my boyfriend then studied here as well. I was here for like three student-for-a-day days. I wasn’t sure about some courses so he just took me there to also show me all the  courses and then I already saw and met a lot of people from CognAC. Therefore, I already knew what the atmosphere was like here.

What do you do in your free time?

This is the hardest question, I don’t know. I don’t really have a lot of free time. I try to do sports and I was a real fitgirl in the old days. Now I’m just trying to go as often as possible. I used to go to the gym 6 or 7 days a week for like two years. Now, I sadly don’t have the time. I like to play games a lot, both video games as board games. I have a switch, but I don’t use it that often, because you know. Who has the time for it?! Other than that, I really like to get more into photography right now and I like baking a lot.

Do you have a favourite recipe? A favourite thing to bake or cook?

I made a lot of rainbow cakes. You know back in the day, when rainbow cakes were still a thing. I baked all of them. It also takes you a whole day to do it, so please don’t.

Okay, then you really must have had a lot of free time haha.

Yeah, I know right. But uhm I don’t know, I also like spending time with my friends here and from home by going out for lunches and other stuff..

I really, really liked HCI. I think I will check whether there is something that I can do with that, but mostly I just liked the social courses. I also really like programming, but later when I actually have a job, I would rather like to work with people. I think I’m good in communicating and leading a project, so I might want to do something with that.

Do you already know what you want to do in like 5 years?

I have no clue, I hope I will finally get my bachelor’s haha. I don’t see myself starting an own company or doing research. I mostly think I will end up working somewhere, but I have no clue.

Do you think you will go abroad for half a year?

What is your biggest achievement?

Laura sighs again. I think organizing the RAGweek was my biggest achievement. It was really fun. Beforehand, my predecessor told me that the RAGweek feels like it’s your birthday for a week. I was like, that is stupid. I’m going to be busy the whole week, running around and things. But in the end, it really felt that way. This was also because I had a really nice board. We worked together really well and we planned everything really well beforehand.
I was mainly in charge of doing the planning of the week itself and was the chair of the RAGweek during the week. Next to that I had to make a separate planning for all board members. It was really fun, I actually really liked it. It also worked out really well. During the RAGweek we hadn’t that much left to arrange, it was mostly going to all the activities.. Everywhere you go, people are just so happy, because they don’t even expect you. They’re going to tell you all about their activity and you just feel very welcomed everywhere and everybody thanked you for your work. It actually really felt like a birthday.

You also raised a lot of money, right?

Yes, we got the record. (Woehoeeeh.) We will see if we still keep it this year. On the one hand, you hope you will keep the record, but you mostly hope that the next board is going to do it better and raise even more money for charity

Do you miss it?

A bit yes, I will also go volunteering a bit during the RAGweek.

I do really miss being so busy, because it was my project, our board was really nice and we really fitted, so it was just something I really liked to do. Having that as a side-project, was really nice. I think in the end of the board year, you’re really done, because you have been so busy for a whole year and you kind of need the time for yourself. But now I get all the flashbacks this week, because it is precisely a year ago and then I’m like aaaah I miss this, it was really fun. On the other hand, it is nice to have time for something else again.

How did you become active within CognAC?

I started with the 1C, which was really fun. I wanted to try out committee work, so I just started with the 1C. In my year there were actually 33 people that joined the 1C, which was crazy. Therefore, we had a 1Ca and a 1Cb and we only had one activity. We organized a cantus, which was really fun, but we couldn’t do that much, because you only have three things to do when organizing a cantus: arranging the location, making a codex and doing the decorations. Well, that’s it. A few of the active people within the 1C then decided that they wanted to do another activity. So we organized the auction with that group, which is actually a funny story. We had a small list with things that people were going to sell and beforehand we made this meter that would go up if we would put stuff in it and then we could show how much money we raised. We were speculating like okay people are going to pay like 1-2 euro per item, so then in the end we will have around 50 euros. So we set the bar, the top level, at 50 euros. And then at the end we had like 860 euros. (Daaaaaamnn.) Even after two of the things we already reached the 50 euros. We did not expect that at all. We kept increasing top level of the bar the whole time, but in the end we stopped because it was just going so fast haha! There weren’t even that many people there, but the people that were there were just really enthusiastic.

Aahh nice and what happened after the 1C?

After half a year, I joined the AlmanaC and the MC. This year, I did the WkC and I am doing the TraC, the AuC and the DAtA, my baby.

I would maybe one day try the OrC as well. Maybe next year or something. One day I will be done with liking to be a mentor, just because you are getting too old and I think it is also fun to see it from another perspective and still being part of the orientation, but not on the foreground with the first years. Oh, there was another one! The XC. I actually would have liked to join the XC this year if I wasn’t too busy. Probably next year, though. I also really liked the career week, I even visited all the activities haha. However, first I have to get some EC’s and not fail my resits.

What do you think that CognAC really needs?

A bigger bk (board room), but we are getting that in the new building, so that is good. Maybe also a bk that has some sunlight, so we don’t kill the cactus. Here, I’m pointing towards our new stuffed cactus. I think the new cactus is amazing, but it is also kind of sad that the dead cactus is still there haha. Anyway, the new one is cute.

What kind of pet do you think CognAC should have?

I think it would be really fun to have a dog running around here. I also heard a lot of stories about boards that had a fish and literally killed it at the end of the year, because nobody wanted to take care of the fish during the summer. Therefore, I think CognAC should not have a pet. If somebody from the board has a dog and could bring it once a week, that would be cool!

What is your favourite movie?

I don’t think I have a favourite movie. Here I admit that I don’t really have one either. Why are you then asking this question? Anyway, the last movie that I have seen and that was actually really good was called The Prestige. It’s about two magicians. If you haven’t seen it yet, you should watch it. I think I will watch it a second time, because after the plot-twist it is just really interesting to re-watch.

After discussing another random movie of which we didn’t know the name anymore, we move on.

What is your favourite kind of music?

I don’t really have a specific music taste, because I don’t really look up music by myself. When I’m with people and we listen to some music, I almost like everything. I just take random songs from everyone and put it in a playlist with random shit. So I guess everything is my favourite kind of music.

Jesus Kim, another hard one. I had a good one lately. I don’t live by this, but it would be a good one for everyone to live by: “Strive for progress, not perfection.” (Love that.) I probably got that from somewhere, but I don’t know where.

Do you have any shout-outs?

Laura has to think very hard here. Small shout-out to the 1MCA, because that’s where it all started. For the rest to all the other committees that are on my list. All the committees I’m in right now are just really fun. I’m not really allowed to have a favourite, but I am really excited for the study trip!!! Yass, me too 😊.