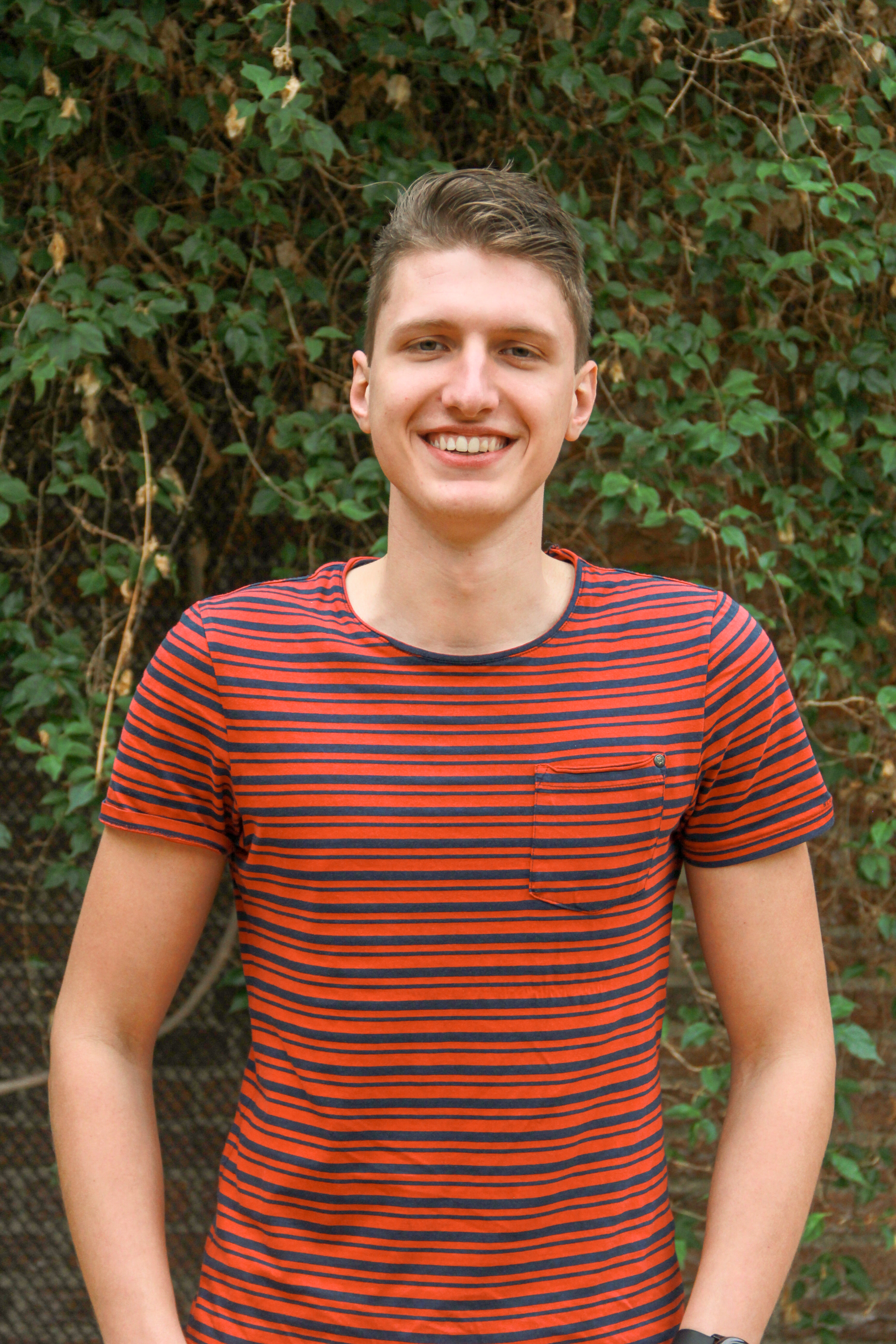 Hi, I’m Micha, I am 20 years old and in my second year of the AI bachelor. I come from the beautiful province Zeeland. I have lived in Middelburg for 19 years and since this year, my parents live in Vlissingen. Since that is a bit far from Nijmegen, I luckily have a room there since the start of my study.

And how did you end up at this study and this city, when you come all the way from Zeeland (which I agree is beautiful 😊)?

I didn’t know for quite a long time what I wanted to do, until I came across the AI study around December in my exam year. I really liked that it is such a broad study and I also was very interested in programming, despite not having any experience with it. Also, Zeeland does not have any universities, so I went to look at Utrecht and Nijmegen and decided Nijmegen is where I wanted to go.

I can relate to this a lot since I’m from Zeeland myself as well haha. So, you’ve been studying AI for nearly two years now, what has been your favourite subject so far?

I really enjoyed Introduction to Artificial Intelligence B once I started to understand it. I really did put a lot of time and effort in it and it was very fulfilling to see my score go up the more I worked with it. It really was one of the best courses I’ve had until now.

I wish I could’ve enjoyed it as much as you did.

Haha, I really did not like the first weeks either, but once all the learning material was done and we started on the competition, it became a lot of fun, especially to experiment with what works best.

I can imagine. Do you already have an idea of what you want to do after your bachelor, or in the future in general?

No, at this point I don’t really have an idea yet. I really think both law enforcement and defence are very interesting, so I want to explore my options there, but other than that I’m keeping all options open for the moment.

Oh, that’s so cool! Since we covered studies now, what do you do next to it, what are your hobbies?

I do sport quite often, pretending to live a healthy life. Next to that, I like to watch series, to eat with friends and chilling. Obviously next to that, there is the stuff I do for CognAC.

We’re really happy you do so 😊. You say you chill and eat with friends a lot, I can image that is unfortunately not possible at the moment, so how do you keep yourself busy during times of social distancing?

I went home to my parents in Zeeland, because there is more space and nature. I at the moment mostly keep myself busy trying to keep up with assignments, as it does take up more time now that we have to do it from home. Other than that, I spent quite a lot of time on the beach, walking my dog.

Your dog is literally the cutest, I really enjoyed meeting him during our Zoutelande Insta take over for CognAC. Which brings me to the next question: why did you decide to become an active member within CognAC?

It started at the first committee introduction gathering thing in the evening (or in other words committee market, although I do really like Micha’s description, maybe I should’ve called it that instead). I joined the Party&Co afterwards, unfortunately the committee stopped after half a year. So, then I joined the DAtA, which I am still part of now.

Well the Party&Co mainly existed to organize our open parties as well as shared parties with other associations. The DAtA took over those tasks, besides the drinks we organize. This year, next to the DAtA, I also joined the Beta Gala Committee.

Micha did not mention the Corporate Identity Focus Group in here, which he was a part of last year. They created our corporate identity, making our promotion and slides, look as pretty and consistent as they do today.

What was it like, being part of the Galacie, as it is an committee outside of CognAC?

I really enjoyed it, because you get to meet people from all the other beta associations. Since I’ve only done stuff from within CognAC up until then, that was something that was quite new to me. Furthermore, the gala is quite a huge event, so if you spend a lot of time working towards that moment and then mostly everything goes well, that really gives a fulfilling feeling. Definitely, also one of the most amazing things I got to organize so far.

It was most definitely an awesome evening. Which one of the committees and focus group you joined so far is your favourite?

Ooh, that’s a tough question. I’ll go with the DAtA in that case, because there is just a lot of gezelligheid within the committee, that really makes it fun to do the work.

Are there any committees that you would still want to do in the future?

I will join the External Committee next year, as I am the Chief of External Affairs of the candidate board. Besides, I might want to join the Weekend Committee at some point, that also really seems like a fun committee.

Cool! What has it been like up until now, being part of the candidate board?

It is really weird to have been candidate board for 1.5 months now without having met up physically. We have to do everything digitally right now which is quite a challenge, but until now everything is going well. I think we have some great plans for next year.

What do you look forward most to if you will become a board member next year?

Making new contacts and the gezelligheid that comes with that. I really hope there will still be enough bonding moments next year, despite all the measures we are dealing with right now.

I hope so too! Since you have already been a CognAC member for nearly two years now, what is your favourite memory in those years, related to our association?

Are you aiming for a specific answer here?

Haha, now that you say that I think I know what you are talking about, but no I did not have an intention with this question.

Well, I’m going to give the answer anyways, because my favourite moments are definitely the karaoke evenings where we represented Zeeland for two years straight, singing Zoutelande. I really hope we can continue that tradition next year.

So do I, since it is definitely also one of my favourite moments each year. So, it was really wholesome to finally visit Zoutelande together with you this year and to have been able to surprise you with being AI* during that trip 😊. Also, dear reader, if you ever want to hear the both of us sing this song don’t hesitate to come to the CognAC Karaoke Evening that will hopefully take place next year!

In Zoutelande you told me you mostly always cook for yourself. Do you have a favourite dish you like to make?

I really like chicken shawarma with Turkish bread, it is delicious.

At this point Micha’s father started laughing in the background, which I guess is the social distancing version of someone interrupting the AI* interview by walking into the board room, which usually happens, but cannot happen now because we are doing this interview via a video call instead.

Do you have a favourite song or music genre in general?

Well, my favourite Dutch song is obviously Zoutelande by BLØF. I think it should be sung at each cantus, but unfortunately it is not an international song.

I 100% agree, they usually also put some Dutch music in a codex, so Zoutelande would definitely fit in there and then we can finally shout “by BLØF” without being punished for it 😊.

Yes exactly, next to Zoutelande I think Avicii is or actually was a real good artist, so sad that he is gone now.

A very good artist and sad that he is gone indeed☹. Let’s turn to a more fun topic: do you have any guilty pleasures?

I really like to try frikandel dishes. Last year, I made an oliedel, a combination of an oliebol and frikandel, that was not really successful. Furthermore, I tried the frikandel pizza, frikandel tosti and frikandel vlaai which where all really nice, I also make frikandelbroodjes myself. I think that definitely counts as guilty pleasure. I think my best creations were the frikandel Christmas tree or my frikandel XXL broodje which included 3 frikandellen. Oh, and there by the way is also the frikandel speciaal salad they sell at Jumbo since a few months, which is also really good.

Did you ever try the discodel?

No, but that one is definitely still on my to-do list. I know of its existence but did not yet have the opportunity to try it.

Haha yes, definitely something you should do. Do you have any bucket list items that you ever want to do?

This is going to sound very cliché, but I would love to go parachuting or bungee jumping at some point. Besides that, it would be cool to travel far away once, to a destination with a different climate.

Is travelling something you do often?

No not really, I only did fly thrice in my life. I mainly used to go to camping with my parents within the Netherlands. I did however have two trips in the planning for this year. The first one would have been Toronto (RIP) and there is still one planned for the summer break, but we still have to see whether that can go on.

I sincerely hope so for you! Let’s move on to probably the most classic AI* interview question: if CognAC were to have a pet what would it be?

What’s that animal that always hangs from trees called again?

Yes, a sloth! It would be super chill to have one hanging around in the board room. Other than that, a dog is of course always a good option.

Most definitely. Lastly, do you have any shoutouts?

First of all, I want to give you a shout out back, since you also gave one to me in your AI* interview.

Furthermore, shoutout to the Party&Co, the Galacie, the DAtA and obviously to my candidate board!