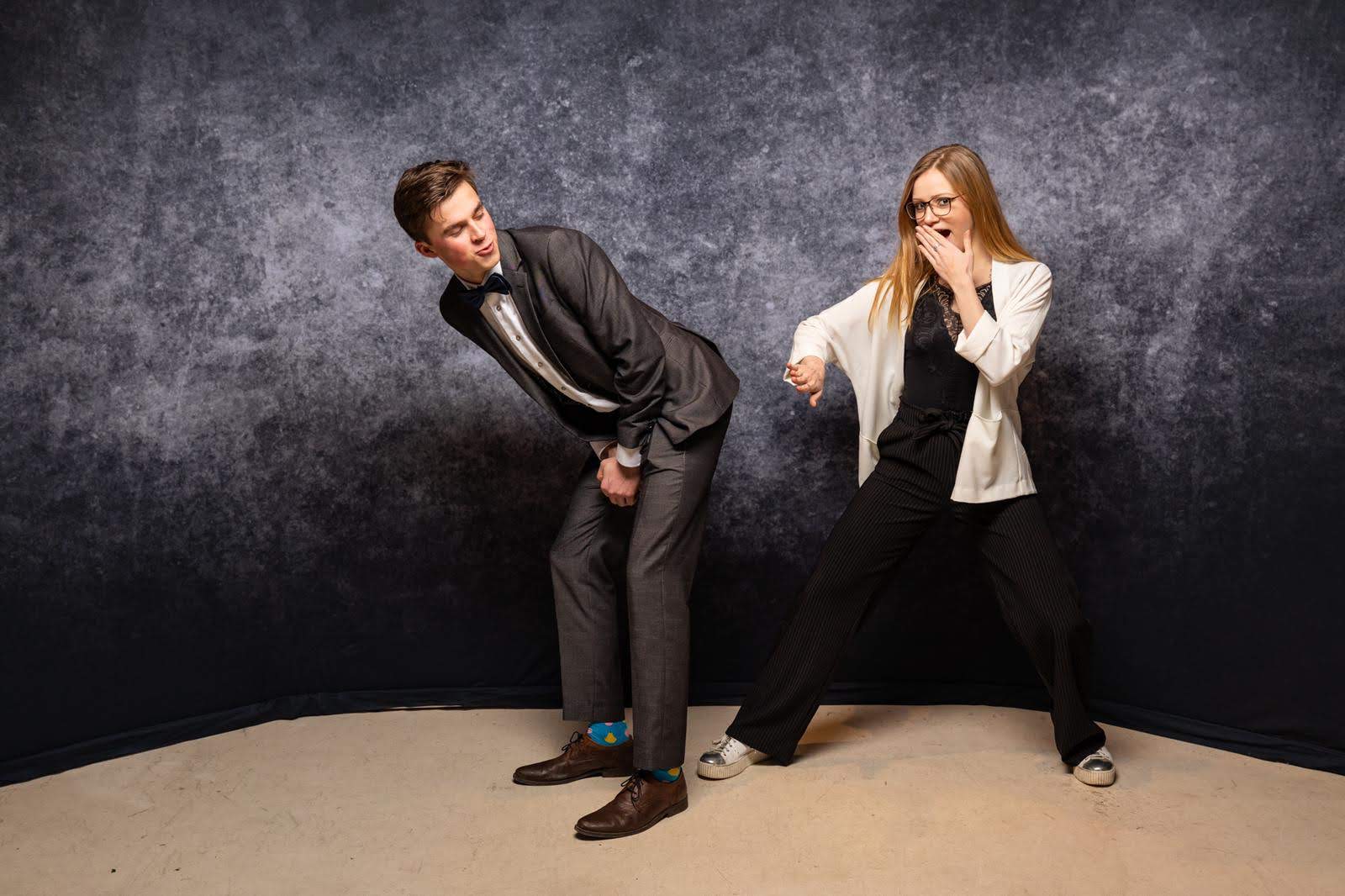 Hi, I’m Mona. I’m 21 years old. I am from Germany, from a small town called Rhede. I am in the second year of the AI bachelor. That’s about it.

I heard that the town you’re from is quite close to Nijmegen, is that true?

Yes, that’s true! It only takes an hour by car. It’s actually quite funny: when I started looking for places to study, my parents thought that I was going to think Nijmegen would be ‘too close’ since I wanted to study somewhere that was far away, for example in England. Therefore, they took a detour when we drove here for the first time! They told me about this later. At that moment I didn’t realize it or consciously think that Nijmegen was far away because of it, though. I think my parents saw their chance to keep me somewhat closer to home than they initially thought I would.

Did you also consider universities in England then, or in other countries?

Yes, I checked out some universities online, but Radboud was the only university I was actively interested in. It was also the only one I applied for, so thank God I got in. I should probably have had a backup was well, but I was really excited about Radboud.

I think it’s adorable that your parents wanted to keep you close. Do you still see them often?

Yes, I do. Although, in the past weeks it’s been a bit harder, because of the corona measures being taken at the border. The borders were closed for a while, and you had to have a good reason to go over the border. There was even a rule that you’d have to go in quarantine if you had stayed in the Netherlands for more than 72 hours and went back to Germany afterwards, so it has been stressful. Normally I go back home every weekend, though, and then I visit my parents and my grandparents as well. I have to go back home for dance training anyway every week. And if I have to go back home anyway, I might as well visit my family.

Yep! I’ve been dancing for six or seven years now. Before that, I played badminton, but I didn’t really like it. I once did a dance course with a friend and there we met some people who danced in the ballroom team. They told us to drop by at their training some time. I really liked it and then I switched from badminton to ballroom dancing. I also do competitions, but sadly, there are not that many competitions in ballroom dancing.

Did you have a competition during the previous CognAC weekend?

No, that was actually a show. We can be booked to dance at events, so that’s what I was doing then. We look quite different at shows! Normally I have blonde hair, but at shows I make it black with shoe cream (note from the interviewer: !!!!!!!!!! shoe cream)

I can imagine that doing all this besides studying AI full-time can be quite time-consuming, how do you experience this?

Yeah, it is really time-consuming. The study advisor strongly advised me to quit or pause the dancing for a while in the first year, because I was struggling a lot with it. But now it’s fine!

Do you do a lot of shows? I think we should book you so we can see you dance with everyone from CognAC.

Hell yeah! Although, I think the committees can think of cooler activities than just one dance show. Booking us can be quite expensive.

Speaking of committees: you’re in quite a few of them. Also, you are chairing two of them right now! How did that happen?

Yes, I am the chair of the PaparaC and the WkC and I really enjoy it! It was more of a coincidence than a plan. I really wanted to chair the WkC, because I have been in the committee twice already, so I knew what to do. Only one other committee member had been in the committee before, so it felt like a good idea to take the lead. For the PaparaC, we needed a new chair, so I just thought ‘I am already chairing the WkC, so why not do another one!?’ The PaparaC doesn’t have a lot of activities, so it’s not that hard to chair. I mostly have to make sure photographers show up at CognAC activities.

I really liked this at the start, because it’s a good first-time chair experience.
Shout-out to the WkC and the PaparaC, they are amazing!

What other committees are you currently in?

I am also in the FC and in the AlmanaC.  It’s my first time in the FC. I really liked the plans Arne has for the committee and I wanted to be a part of it! The reason I did not join before, was because the FC was mostly focused on making food for during other committee’s activities. That wasn’t really what I was looking for in a committee.

This is my second year in the AlmanaC. I really enjoy working with a group of people on such a big project!

If you joined for a third time as well, we would’ve been in the same committee :(

Haha yeah, true. I have other big plans for next year, though! I applied to be an APS mentor. I also applied to be in the Kompanio board. Therefore, I have to make some space for next year. I think I will hear today if I get in the board (spoiler: she got in!), so I am really curious. We’ll see.

Okay, so you do a lot besides your study! How is your study going, though?

Even though I struggled quite a bit in the first year, it is going quite well now! When I pass OOP, I will have passed all my first-year courses. I’m working hard on passing that course right now! I had to make some space in the second year for my remaining first-year courses, so next year I still have to do some second-year courses as well. I have some courses to catch up on, but it’s going pretty well. It could be way worse!

Here, Maike realised she had a full document of questions that she had been almost completely ignoring up until now. So, here are some questions from the document!

We’ve mostly been discussing stuff from the present and the past, so here’s a question about the future. Where do you see yourself in five years?

I think I want to do a master after my bachelor. I am not sure which one exactly, but I am looking into it. I do not think I want five dogs, but I would be fine with a cat. A cat and a rabbit. (At some point we discussed that an elephant would also be cool, but that it would be better to just go for the cat and the rabbit.) I used to have a rabbit when I was younger, so I would really like to have one again. I want to be in the top three of the German dancing teams with my dancing team. I hope I will still be with Duco in five years, that would be amazing. He doesn’t really like pets that much, so I hope he will be fine with a cat and a rabbit! Also, I will probably still live in a student room, and I’m fine with that. Yeah, that’s about it.

Did you have a favourite toy when you were little, and what was it?

Oh my god, yes, I had one! It was a Barbie. A boy-Barbie. Not Ken, though. It was my sister’s, but I always wanted to play with it, so I always stole it and then brought it back. She always noticed, and we always got in a fight about it. The doll looked like a surfer boy, he was a beautiful Barbie. It was probably my first crush ever.

Since you are in the food committee, do you have a favourite recipe to cook?

I think my favourite thing to make is lasagna. I put a lot of effort in it when I make lasagna, so it always turns out amazing.

What’s the number one thing on your bucket list?

I have two! I want to fly an air balloon at some point in my life. Either during sunrise or sunset. The second thing is doing a backpacking tour through Scotland and visit the places where Outlander has been filmed.

My sister has visited some of the spots where Outlander has been filmed. She said it was so beautiful and that the atmosphere was so strange (in a good way!), and that is was really great to be there. Therefore, I want to see that spot really badly, as well as many other places.

So, you’ll do a tour through Scotland, and then finish with an air balloon flight?

Shout-out to the current board, mah people from the WkC and the PaparaC, the AlmanaC and the FC as well, Sven for always helping me with OO, Carla because she tha best, and all CognAC people!

Thanks for the interview, Mona!