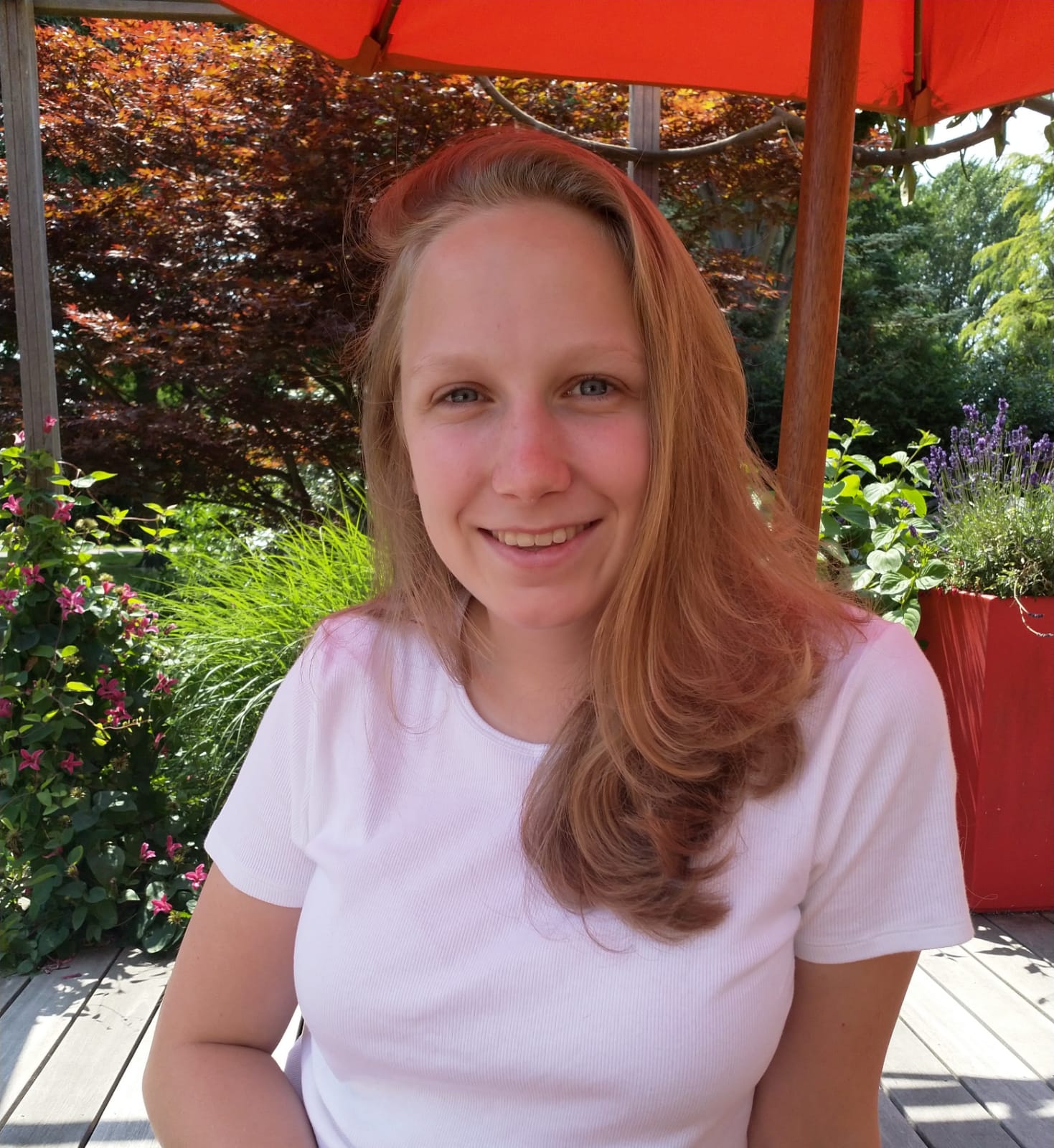 Where do you come from and why did you come study in Nijmegen?

I come from Capelle aan den Ijssel, which is close to Rotterdam. I came to study here, because the AI study in Amsterdam was too technical for me and Utrecht was too philosophical and Groningen was way too far away. So, Nijmegen it is. I also feel like Nijmegen is a better match than those bigger cities, because it’s smaller, just like my home town. Besides, here you have the focus on the brain more, which I like.

Why did you want to study AI specifically?

I did some study choice tests and these said something in this direction and then my teacher at that time said: “Well, you should look into AI, maybe that’s something for you.” So, I was like “Okay, well sure” and in the end, it actually was really interesting.

Ah nice! What do you do in your free time?

I like to play korfball with my friends there. I’m a member of SkunK, which is the korfball student association. We have activities there, which is really fun. And I’m going to do a board year there, which is really cool! We have our first meeting this afternoon, but the election is only at the end of September, so we still have a lot of time to figure out how we are going to make the policy plans.

That’s so nice! Talking about being active, how did you become active within CognAC?

Well, I really liked the orientation week, when I participated as a kiddo. I thought: Oh, I want to this as well! So, I joined the OrC. Afterwards, I also joined the Monopoly Committee, because it sounded like a lot of fun and it was. In the second year, I decided to try to lead to OrC as a chair, so I became the chair!

How is that going so far?

If everything would have gone the same as last year, it would have been much easier. But I think we are coming somewhere now. Hopefully, next week we will get the definite planning and then we can actually start planning etc. It’s going to be fine and I’m still excited so that’s nice.

By making Marleen AI* we didn’t only wanted to thank Marleen for her hard work the past two years, but we also wanted to use this opportunity to give her some extra love and tell her that we support her throughout all these (annoying) meetings right now. We believe in you Marleen, you can do it! 😉

And you’re also in the CTC, right?

Yes, that was because nobody really wanted to join the MoC and then the CTC got set up, so I was like well sure I can also try to organise city trips and it turned out to be more fun than expected, so that’s really nice. We’re planning to do an activity in October.

Are there any committees still on your to-do list?

Yes, the WkC. I think that will be fun, but not this year, because I will probably be a bit busy with the SkunK board. I’m also in the current weekend committee of SkunK, but the weekend got cancelled, which is really sip. We even made an amazing introduction theme reveal. Hopefully, we can organise the weekend again next year and then do something with all the ideas we had for this year.

I hope so too!

I guess I’m still studying then, but hopefully I will be finished with my bachelor. I might go do a master’s. In 10 years I hope to have a job and maybe a dog, because that would be nice.

Here I asked what name Marleen would give to the dog, but she didn’t think about that yet.

I think I want to have a labradoodle. My aunt and uncle have one and it’s so cute and fluffy and I’m gonna dieeeee!!!

Do you think CognAC needs a pet as well?

A fish is kind of convenient, because you don’t have to take it outside, but it is kind of boring. So, if there are no restrictions on time and space and possibilities, you should definitely get a penguin. (A penguin?!) Wait, I have a penguin.

She is called Emma. Do you know those penguin life streams? They are really fun to watch when you’re bored of when you need a distraction. It’s amazing.

Marleen looked up a link and we both got distracted for a moment, because the penguins were wobbling (Dutch: waggelen), so cute! If you want to be distracted as well, you can look here. You’re welcome!

Is your favourite movie a penguin movie, like happy feet or what else?

Happy feet is nice indeed, but it’s not really my favourite maybe. It’s a difficult question. I think, okay this is maybe a guilty pleasure, but my favourite move is probably High School Musical. It’s so for people not my age, but it’s still great, I like it.

Marleen admits that she knows all the songs, after which I have to admit that I know a lot of them as well.

Do you have any other guilty pleasurers?

No, I think the high school musical one is a big one, so there is not much room for any other guilty pleasures. I mean what falls under the category guilty pleasure. (Fair point.)

I mostly just listen to what is in the top 50, but I also like BLØF and other Dutch songs where you might or might not cry. My playlist is kind of a mix with pop songs and Dutch music. Besides, there are some Disney songs in it. I recently got Disney+ and every time I’m watching a movie and I like the song I’ll just add it to my playlist.

Why do you have to ask such difficult questions? (Uuuuh.) I’m looking for inspiration in my room. I actually have one inspirational quote on my wall. It’s French, but it says: “Je voulais vraiment bien me comporter mais il y avait trop dáutres options.” The translation is on the back: “I meant to behave, but there were too many other options.” I don’t know if this is actually my life motto, but it is on my wall, so I guess. Oh wait, I actually have another one on the wall. My dad gave me this one, it says: “This house is clean enough to be healthy and dirty enough to be happy.” But he put a sticker on it and now it says “room” instead of “house”. That is because he always thinks my room is a mess, but yeah. Okay, it is indeed a mess, but I feel like I’m organised. I know exactly where everything is, but he is like: “no, it’s a mess.”

Do you think CognAC really needs something?

A penguin! No, I think we should have a stuffed animal mascot.

Here, I mention that we have a stuffed cactus and the other stuffed animals in the board room.

Again, Marleen shows me something from her room. This makes doing these interviews over Discord way nicer haha.

It’s an inflatable flamingo, which floats on the water and you can put your glass in the middle. If it’s going to rain and the Spinoza garden floods, we actually might need this.

Here I suggest to put the Spinoza garden under water.

YES, like one big pool. We can do a pool party. Nobody will complain, because it’s the Spinoza garden, who cares. We can get seaweed instead of the current plants and the temperature in there is already hot enough to keep the pool warm. We can put all the fish we buy as CognAC pets in there. We just make one big aquarium where you can swim.

I suggest to put a dolphin in there as well, but apparently they are really dangerous, so Marleen sent me a picture of a dolphin eating his prey, which looked nasty. They even kill other baby dolphins! We discuss it a bit more and decide to add a turtle and seals in the aquarium. There will be ducks as well, but they need to be in the DE café, because they cannot be the main attraction. Just so you know. Eventually we move on.

Do you have a favourite recipe? Asking for a friend.

I have one, but it takes a lot of time. It’s lasagna. It doesn’t have a lot of vegetables, but it is delicious. I really like lasagna.

Marleen sent me the recipe afterwards, but it is in Dutch, sadly.

Do you have any shout-outs?

Probably yes. Let me think about this. No, of course. The people in the OrC, they are amazing! We’re gonna make it work. Besides, shout-out to the CTC, of course, and the new board, because they just got elected and it’s going to be an amazing year.

Sweeet. Thank you for the interview Marleen!