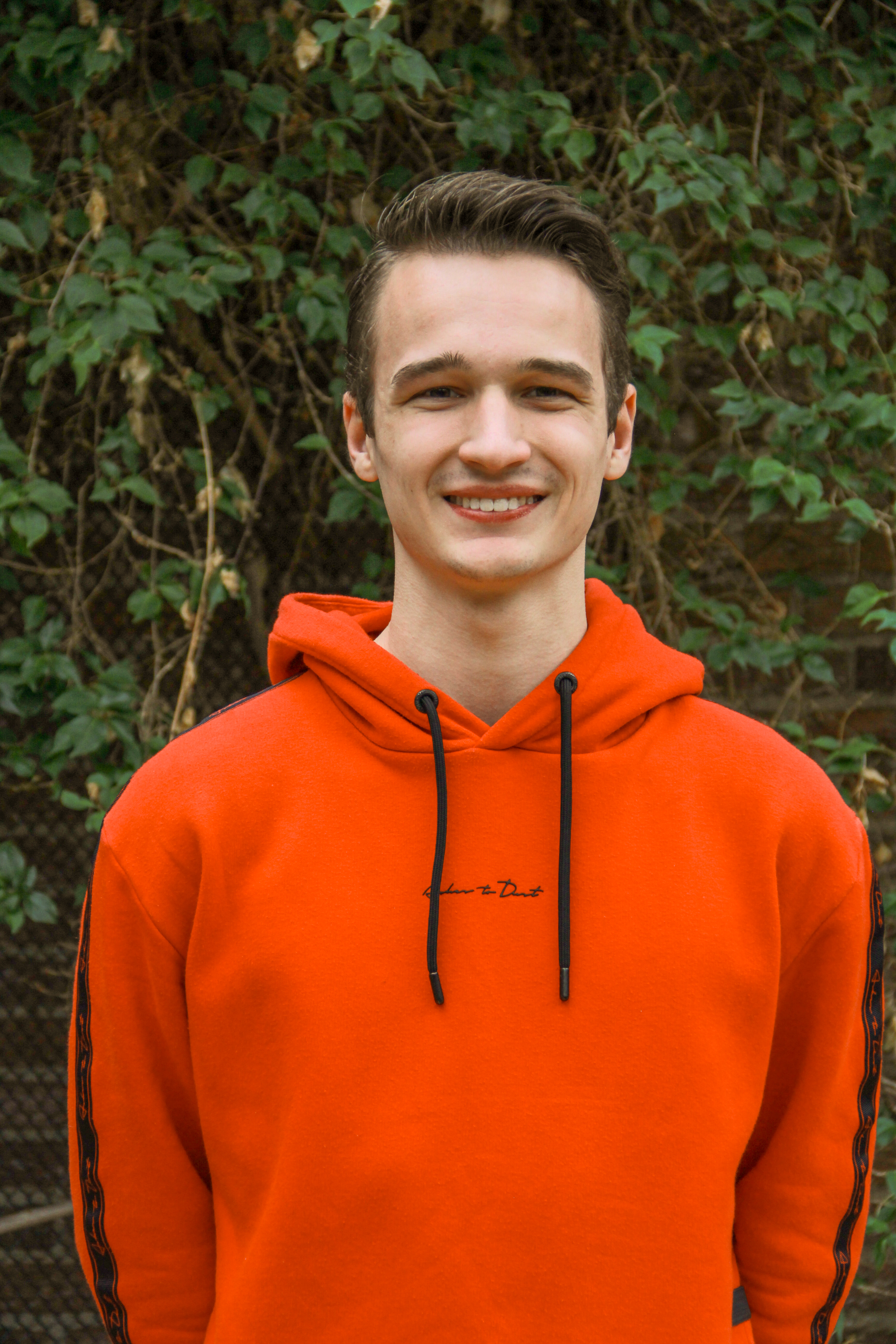 Hello, I’m Cis van Aken, I’m 19 years old and currently in my second year of the AI bachelor. I come from Zevenaar, which is close to Arnhem. I moved to Nijmegen about a year ago. I like playing sports and next to that, I’m in multiple committees. Also, I’m an APS mentor this year.

I think that the most important question is: Do you have any pets?

My parents do have a dog called Mikki. She is now 6 months old.

Aaah that is so cute. Please send pictures! Which sports do you do?

I played football and did judo for a long time. I was training for the black belt in judo before I moved to Nijmegen. My training was each Tuesday evening in Zevenaar, so I quit after I moved. Currently I’m not doing any sport here, but I would like to start boxing or kickboxing in Nijmegen.

A black belt?!?!? I didn’t expect you to be so dangerous.

Yes, I look less dangerous than I am ;)

Do you have other hobbies besides sports?

Uuuh yes, I always want to start learning new things, which I only do for a short time. Recently I started learning Blender, which is a program for 3D modelling and animations. I work on that for a few weeks, pause for a period and continue again. That cycle continues for multiple hobbies, recently I also started practicing on a guitar, but the guitar is in Zevenaar now and I’m in Nijmegen, so that doesn’t help.

Haha very relatable. Having a lot of intentions, but not finishing them in the end.

Exactly. I also like gaming, I always have music on the background and I like to cook. I’m not the best chef and sometimes a bit chaotic, but I like it.

Talking about cooking, you are also in the Food Committee of course. I assume you also have a favourite recipe?

My specialty dish are enchiladas, so wraps in an oven dish with sauce and a lot of cheese. Very easy and very delicious.

That sounds as a very good student-proof meal. Another very important food-related question is: What is your favourite late-night snack?

In general, I enjoy snacking nuts, for example cashew nuts or cocktail nuts. They problem with this snack is that you keep eating them, because they are so nice and tasty.

I agree that cocktail nuts are the perfect snack #teamborrelnoot.

Something else, how did you end up here in Nijmegen for the AI study?

Well, I started orienting for studies when I was in the 4th year of VWO, because I really had no clue what I wanted to do. I did look into chemistry, science and some other study which wasn’t so impressive because I don’t remember what it was. I had one spare block in my schedule during the open day, so my dad suggested to visit a talk about artificial intelligence. I participated in a student-for-a-day program at the AI study and here I am now. So i0t kind of happened randomly that I ended up here and I don’t regret it.

You survived the first year, so that is a good sign. Why did you pick Nijmegen to study and not another city?

I first picked the city before I searched for the study. Since I’m from this province and I visited Nijmegen already multiple times, I knew this was a fun city. Both my parents also studied here, so they also agreed Nijmegen was a nice place. I also visited some other cities. I looked in Enschede, but I didn’t like the studies that much. I will probably insult some people from Utrecht now, but I really don’t like that city.

Luckily, you almost have a black belt so you can defend yourself against those insulted Utrechters.

What is your favourite AI course you had so far?

I don’t have one specific course, but I thought the Brain course and Frequentist Statistics were interesting. Both courses are very different, but that is also what I like about the study.

How did you become active in CognAC?

I really liked the atmosphere and the people during the orientation week and a wanted to meet new friends. I thought joining CognAC would be a nice way to achieve this. After the Back2Skoelkast I also wanted to organise such events, so I joined the DAtA, and now I’m the chair of that committee. So that is how I rolled into CognAC.

Are you in any other committee besides the DAtA and FC?

So far, I only was in the DAtA and Food Committee. There is a whole list with committees I still would like to do, but for now this is already busy enough.

Do you have a specific committee you would really like to join?

I think the OrC would be really nice or the WkC, because they both organise some of the bigger events, so maybe also the SymCo.

You still have a few years to go, so plenty of time to cross them of your list.

What do you think CognAC misses and really needs?

Well I said this before: we really need CognAC socks. I heard they are a bit expensive, but I do like wearing special socks like Happy Socks, so I would definitely buy them.

I totally agree, we need those socks. What do you think about a CognAC pet, should we have one?

Knowing CognAC, this should be something that needs not much attention. I think a fishbowl in the boardroom might be nice, but I’m not sure if they will survive there a long time.

I must admit that I’m not sure if our fish would become very old, especially because we are not allowed in the boardrooms right now.

Now a little bit more about you. Do you have a favourite movie or series you like to watch?

I’m a huge Lord of the Rings fan; those movies are fantastic. I don’t have a favourite out of those three.

How many times did you watch those already?

I don’t know that exactly, but at least once a year. I even read the books.

EVEN THE BOOKS!, we have a diehard fan here. Do you have favourite music, next to the Lord of the Rings music?

The Lord of the Rings soundtrack is indeed very good. I do not really have a favourite genre. I looked at my Spotify Wrapped and there was modern rock, hiphop, EDM and alt rock in there, so very diverse. I have one big playlist and depending on my mood I skip a lot of songs until I find a song I like at that time.

Very relatable, I also have that one big playlist.

I heard you can also do some card tricks, is that correct?

Yes, I know a few. It started purely out of boredom. It started during the first lockdown. I wanted to do something that was not behind a laptop. I like card games and already knew some shuffle techniques and a friend of mine knew some card tricks, so that is how it started.

Do you have a deck of card lying around?

I knew this question was coming. It has been a while, so I don’t know if I can still do the tricks.

Just show me, otherwise I will write that they did work and that I am extremely confused.

Cis does something magic where he puts 2 cards randomly in the deck and shuffles them out again. What a miracle!! While I need some time to recover from this, Cis prepares another trick. Since we met on the CognAC Discord for this interview, Jorrit decides to also join the Boardroom voicechannel. Woow, now it really feels like a physical AI* interview where someone comes into the boardroom.

Cis does a trick where certain cards magically travel from one stack to another, which happens multiple times. I shout that the outcome is impossible. Cis starts to flex by saying “now I’m doing it again, now you know where to watch” and manages to do the trick again. We still have no clue, total confusion. Jorrit asks if we really met on Discord to do card tricks and then realises he crashed the interview. He wishes us luck with the interview and leaves again. I try to focus on the interview again after the card confusion and continue.

I don’t know what to say after this magic, so I will quickly ask my last question: Do you have any shout-outs?