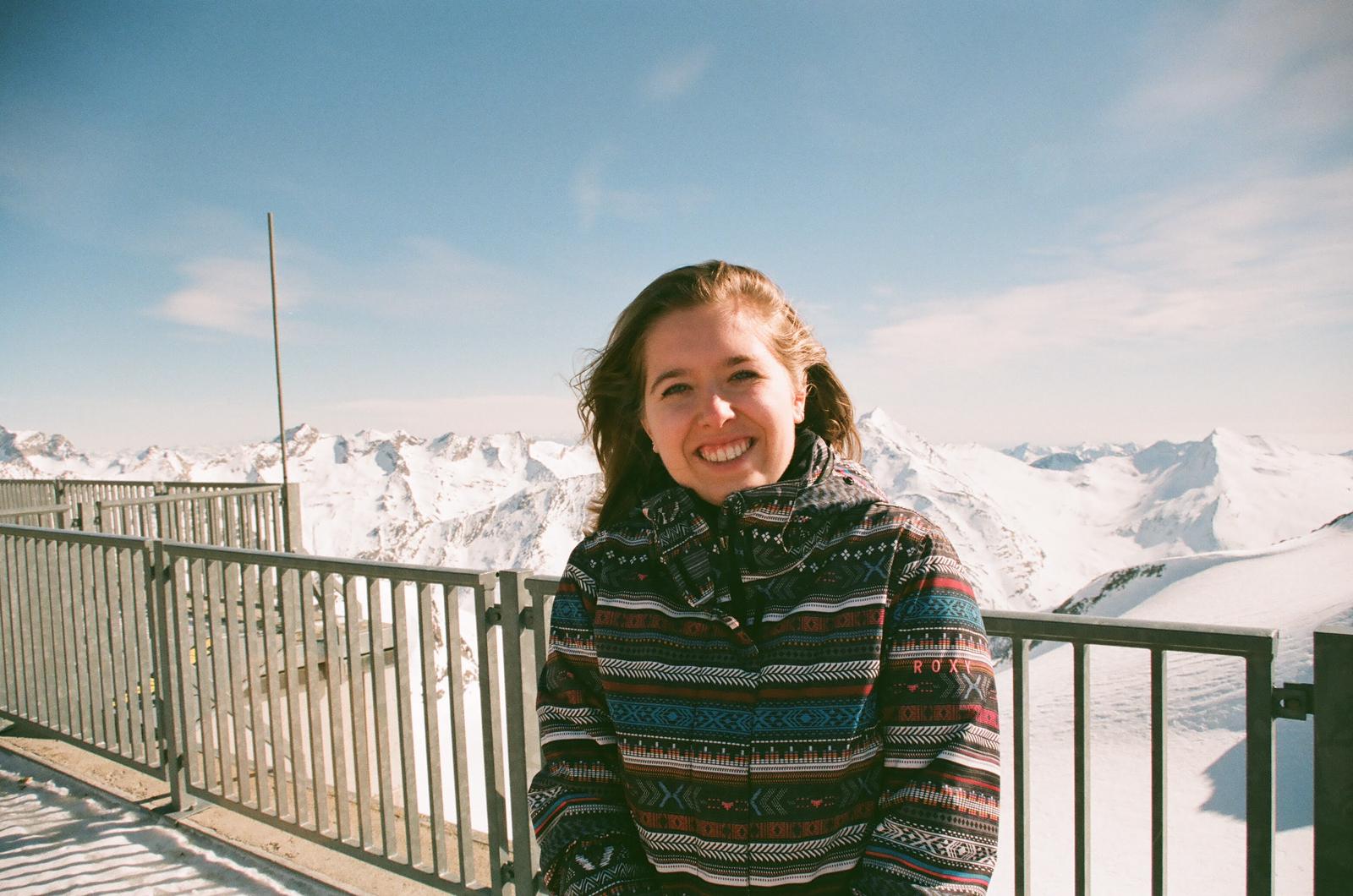 Let's start with some easy questions! How old are you and what study year are you in currently?

I’m twenty……two. I’m twenty-two. I’m not used to saying it haha. And as of a few days I’m officially a first-year Master. I got my bachelor in January so I started my masters just two weeks ago. I got officially approved when I got my last exam back.

Cool. What master’s did you start?

AI here in Nijmegen, the Intelligent Technology track. I just continued here, I really liked it in Nijmegen so I didn’t want to leave yet.

Originally I’m from a small town in Overijssel: Deventer. I’ve lived there with my parents for 19 years. Then I moved to Switzerland for a while to become an au-pair and skiing teacher. I really loved it there and I really want to go back. Now I’ve been living in Nijmegen for 4 years.

Wow! I did not know that. I learn something new every day.

Do you have any pets?

Yes, my parents have a dog. He is 11 now, so he’s quite old. But he’s still really happy when I come home. His name is Chip by the way, like a computer “chip”. So it’s appropriate with my study. No he already got the name before that, but I guess it was already on my mind back then haha. I don’t have any pets here in Nijmegen. I considered getting a dog when the pandemic started but it’s a bit too much work and my room is too small. We used to have a rabbit, but we don’t anymore.

Wait, in your student house?

Yes! A huiskonijn. Mostly before I lived there though. It’s a lot of work to have a pet with several people though.

Why did you decide to study AI?

I actually still don’t know why I decided to study it. I took a gap year where I went to Switzerland. When it got a bit later in the year, it was time for me to start looking for studies and see what I wanted to do. I looked at several universities but still couldn't find a study that I liked. I applied for food & health (voeding & gezondheid) in Wageningen, which was numerus fixus. I actually got in but then something in my mind said “you have to do AI!!!!!”. I got more excited about this. At first I was a bit hesitant to do such a beta study, because I thought it was going to be too hard. But now I’m really happy it turned out this way.

Well, I mean you got your Bachelor’s, so it turned out great!

Yeah, you could say so.

What is your fav course?

What was your thesis about?

It was about if you could apply deontic logic in law. Well, it was more looking at whether it was necessary to use deontic logic. I made two models, one with deontic logic and one without, and then applied it to the same cases. Then look at the outcome. Is it easy to use? Which one is better? Then you could say something about it.

Why did you become active within CognAC?

Hmmmmmmmmmm I remember that I really enjoyed the orientation. My mentors were already active in CognAC. I had some good friends -Ilse, who now left- that really wanted to join. At first she was like ‘you should join a committee and then just see what happens. In highschool, I really liked debating and holding discussions, so I thought ‘okay, might as well just join the Discussion committee and see what happens.’ I really enjoyed it! I liked seeing other people with the same interest. I also joined the Orientation Committee in the same year. I really liked that it was a small family that brought everyone together. I really liked that when you walked at university -back then you could still walk through university haha – you just bumped into someone and could have a whole conversation even though you didn’t really know each other and have only seen them once at an activity or something. Basically I just rolled into the study association-life.

In which committees are you right now? And what was secretly your favorite, I know you can’t actually have favourites but everyone has them, right?

For CognAC I’m only in one committee right now: the external committee. But that has something to do with the fact that I’m also still doing committees for Olympus. There, I’m in the voorraadcie and in the filmnachtcie. I really don’t have a favourite committee, I really like all of them a lot.  Because I did very different committees. You can see that I liked the more serious side of committees: discussion-, external-, and also some parts of the orientation committee. So I searched for the committees that are a bit less serious in Olympus, which turned out to be the filmnachtcie. We organize the filmnacht each year. I really like that all committees do something different. I can’t say that I have a favourite, I like all of them.

That is such a cute answer! Very politically correct as well. You briefly mentioned Olympus, you did a board year there?

Yes, last year I did a board year for Olympus. I was the treasurer of Tartarus. Tartarus is for all the stock you have in the canteens. I was also a general board member of Olympus, which means that if there was a task that nobody else could do, I would do it. I really enjoyed it. It’s really nice that you meet a lot of people from different associations. I made a lot of friends, our board consisted of people from 5 different associations. I really made friends for life.

A roommate entered Bibian’s kitchen and interrupted the interview shortly.

What was I talking about? Oh yes Olympus.

Do you want to add anything? What was the most fun thing that happened during your board year?

There were so many fun things. I think the most fun things were all the activities I got to do with all the other associations. I became a benefactor of several associations. It was really nice to see how they did some things differently than we do it at CognAC, but still kind of the same. Since the boardrooms of Olympus are above the canteens, you could always hear when there was a borrel and just walk in. I think the most fun things were just to spend a lot of time with new people and joining activities that you maybe otherwise wouldn’t have joined.

Sounds nice! I would almost consider doing a board year at Olympus myself.

Hahhaha no Bibian, I (Laura) should really finish my Bachelor’s some day.

What does CognAC really need?

I could say what everyone says: we need a pet. But I understand that it’s not that feasible. I really think CognAC is really amazing as it is. But if I could make an addition: we need more plants in the boardroom. Maybe a banana tree? There are a lot of plants that really don’t need that much caring. With so many people walking in and out, people will automatically take care of it. Maybe the problem is that it might get over-watered though. You should make a scheme to water them. I got some plants myself during the pandemic. I really enjoy looking at my plants right now. I think the board room needs more plants.

I agree. We actually have a window in the new board room now. So maybe there is actually some sunlight for the plants.

There is some discussion about plants. I (Laura) can now blame Bibian if I turn the boardroom into a jungle.

What are your hobbies/do you enjoy doing next to your studies?

I like to do committee work and things for Olympus. That still takes quite some time for me, and I really enjoy it. Next to that, when I try to relax, I like to go swimming. Sadly, the pools are closed right now and I think it’s a bit too cold for me to go swimming in the Waal. And I of course really enjoy watching Netflix. During the pandemic I got Netflix, Disney+, Prime, … well, everything there is basically. I share it with other people so I don’t have to pay a lot. I also started playing bass guitar about two months ago, but I’m not that good yet. I really enjoy learning it.

Cool! To follow up, what is your favourite Disney movie?

Well, I’m in a bit of a debate. I usually always say the Lion King. I could watch it over and over again. But then I watched some remakes, and I really liked Cinderella. But I think my all-time favourite is the Lion King, I also liked the remake.

If you had to choose between the live-action and the animated version, which one would you pick?

I think, for old-times-sake, I would pick the animated version. It brings back so many memories from when I was younger. Watching it together with my brother, together on the couch, crying when the dad died. Wait, is that a spoiler? I think everyone has seen it now right? The hakuna matata song. Back to the old days.

What is your ultimate guilty pleasure?

I don’t consider many things as guilty pleasures. I don’t feel bad for enjoying things. There is one thing I do, which is really weird. I really like these chocolate cookies (digestive), then I put whipped cream on top of it. It’s really sweet. You also have a plant-based whipped cream, for the people who want to eat vegan. I have a vegan roommate so I tried the plant-based version once and I actually liked it a lot more. So now my guilty pleasure is chocolate cookies with plant-based whipped cream. It’s really sweet and fluffy, but also crunchy. It really is the best of all worlds. I actually always have it at home. I need to have it at all times.

I don’t really live by a life motto. I usually say: “do what makes you happy”. Happy people are the nicest people, brightest people and usually the most fun to be around. So really try to be as happy as you can. And it’s okay if you have a day where you are less happy of course, but always try to strive for as much happiness as possible!

I knew this was coming. I thought about it, but it’s really hard. I want to give a shoutout to too many people, but I don’t want anyone to feel left out. So, first of all, shoutout to everyone in CognAC! But also a special shoutout to everyone that I met last year during my board year, my board and the other boards. Also a shout-out to the XC because we worked really hard on the career week and everyone put a lot of effort in it so they really deserve it.