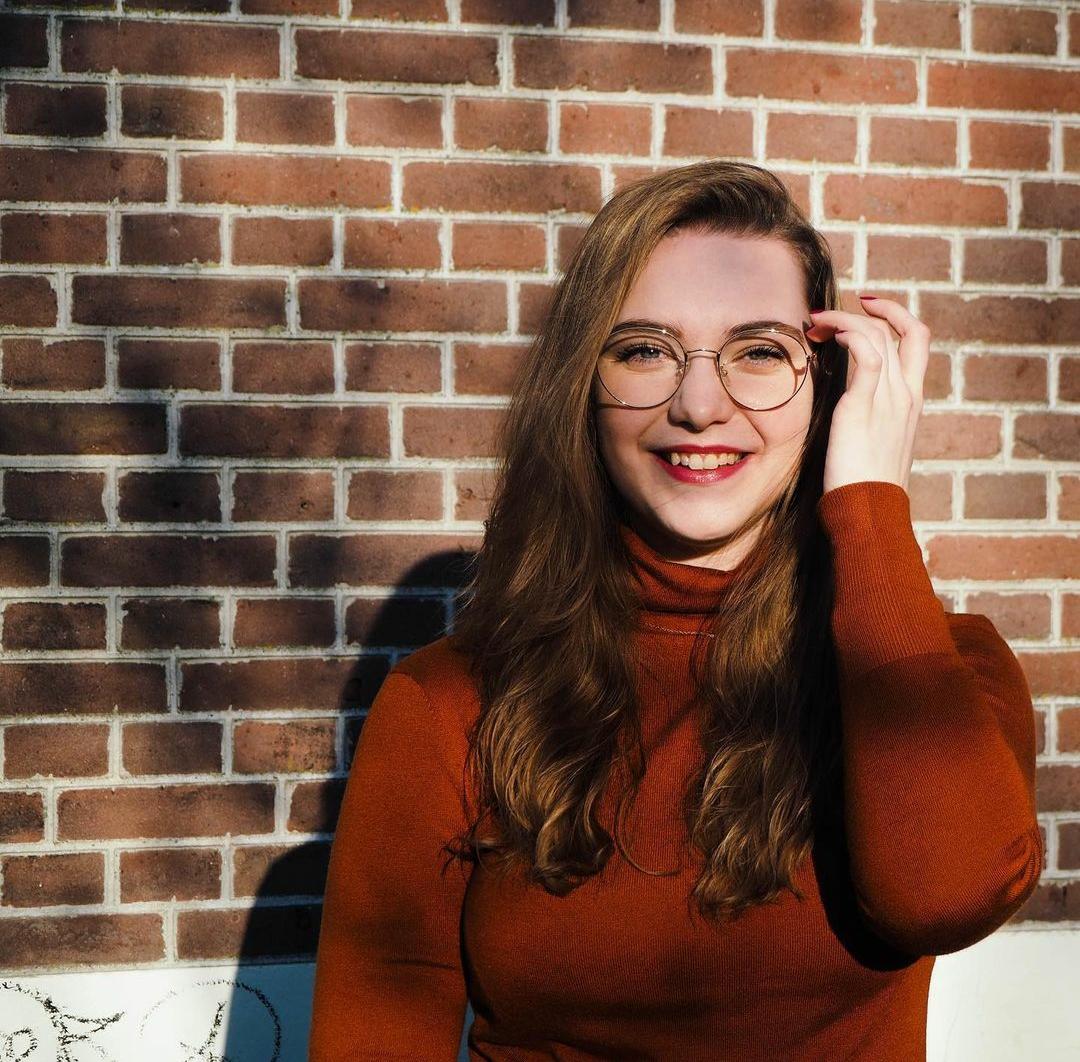 Hi, I’m Eléna. I’m 22, soon to be 23 though. I am half-French, half-Luxembourgish, studying in Nijmegen. I did a study before AI, which a lot of people don’t know I guess. I did Business Administration and I .. didn’t like it. So I decided to change, but I still liked Nijmegen so much that I wanted to stay here. I looked for something that was still at Radboud and then I found AI! And luckily I still like it.

Do you have any pets? Hobbies?

I do have a cat. She’s cute and chonky, her name is Monoi like the exotic flower. I guess it’s more of a French thing? I indeed did not know about the flower.  But she’s very cute, she got stuck in a tree last summer which was very entertaining.

I like working out, even though with corona it’s been a bit more challenging since I like to go to the gym. I started taking dance classes in Nijmegen which unfortunately got cancelled too. I’m back in Luxembourg for a bit right now and now I’m trying to get back into sewing! I want to sew some clothes and see how that goes.

That’s so cool! When did you learn how to do that?

When I was 17 I really wanted a sewing machine, but then my parents convinced me not to get one. But that was because all my friends put their money together to buy me a sewing machine for my birthday. Which was adorable! So then I started playing around with it, I kind of stopped doing it for the past two years due to university. But now I’m trying to get back into it! I’m gonna try to make a dress for summer, and try to up-cycle some old t-shirts and stuff like that.

That’s awesome! How did you learn this? Did you have any lessons?

The mom of a friend of mine does a lot of sewing, so I went to her a couple times so I would learn the basics and how to use the machine. I also watched some videos and basically just played around with it and tried out different things.

What is your favorite topic in AI?

I make the distinction between high- and low context cultures, which has to do with how directly a message is said. For example, Dutch people are very low context as they are very direct in what they say and how they say it. Whereas in other cultures you should not talk about some topics directly and use a bit more of a passive or indirect approach. So I want to implement two different chat bots that implement those two different communication styles.

That sounds so interesting! I’m curious to see what kind of results you’ll get.

How did you become active within CognAC?

I didn’t actually expect CognAC to be so cool and so active when I started. In my previous study, I didn’t really like the study association. Most of what they organized was in Dutch, so it was difficult to get involved as an international. They were also not doing as many activities. That’s why I decided at the time that I wanted to become active within AIESEC (AIESEC is a student organization that provides career and volunteer opportunities abroad) the next year. But then, when I started AI, I was like wait.. CognAC is really cool! I wish I could get into committees there! However, I was already in AIESEC and that was taking a lot of time, and I needed to get my BSA and all that. So I decided to not join any committees in my first year and I would just join all of them in my second year. This resulted in me joining three committees in my second year, haha.

Nice! You did a part time board year for AIESEC right? What kind of work did you do?

I was in the marketing team in Nijmegen. This was nice, because I could do some design stuff which I discovered I really enjoyed. AIESEC is a lot of fun but also quite intense, you have weekly meetings and conferences to go to and stuff like that. You learn a lot, but I knew it was not compatible with doing CognAC committees as well. That would’ve been a bit too much haha. I also stayed at AIESEC the next year! I just did a different position in a different team that would take less time. This way, I could kind of get the best of both worlds.

A true Hannah Montana. How was it to chair the AlmanaC on top of all that? How did the first and the second half of the year compare for you?

Oh, yeah, it was tough. I think the idea of an almanac is really cool and it’s super fun to have one and look back on your year in. I also thought it would be a fun process to make it. I actually almost joined the almanac in my first year.

When I started chairing, we had quite some people in the committee. Throughout the whole year, we also had people leaving and new people coming in so it was quite a dynamic team. I think the toughest part is just finding a good way of working that’s also suiting most people in the committee. Because it’s such a big project, you have to work quite regularly over such a long period. We luckily found a good way of doing that by meeting in person every now and then and all working on different tasks during that time. But then.. corona hit and we had to reorganize everything again and especially in the beginning it was extremely tough. We use design software on the computers at university, so the problem was simply not being able to work on it at all from home.  On top of that, we had to adjust the content of the almanac as well as all physical activities got cancelled. We tried to cover the ones that happened online, but because most of it happened over Discord we also had the danger of it becoming too repetitive. There was a lot of readjusting, but I think we managed quite alright.

Yes you did, it turned out great! I can imagine it’s really awesome to make like, a product that you can keep forever.

Yes! As much fun as it was to make, I’m super happy to finally have the book in my hands. That was a really surreal feeling! Finally having the book in your hands after months and months of working on it. It’s very satisfying after such a big, challenging project.

Then, a classic in the AI* interviews: what does CognAC really need according to you?

At this point? Just a physical activity hahaha. Meeting each other in person is what CognAC really needs.

Yeah that’s fair. Let’s move on before we get sad. I always come to you for recipes. What is your favorite recipe to cook?

Anything that can be made in one pot, so you have less dishes to do. I have this new recipe I’m obsessed with! You do need an oven, but it’s a coconut curry soup with crispy tofu and noodles. I recently made it for my parents and they are now obsessed with it too. That one’s a big winner at the moment.

I ask Eléna to send me the recipe as one-pot recipes and little dishes are totally my style. Here it is: https://pinchofyum.com/coconut-curry-ramen

What is something cool that you did that you’re really proud of?

I won an entrepreneurship competition when I was 17. That was cool! It was the US embassy in Luxembourg that opened an all-female competition. I participated with a friend from high school to make sustainable reusable cups that you could collapse so they would get really thin. At the time, it was quite revolutionary. But now they are actually very common and you can buy them anywhere! So we’re a bit sad that we didn’t act on it then, because maybe we would have been rich by now. We did win iPads though, that was still nice.

Oh nooo you could have been so rich. Do you have any hidden talents?

It’s not really a talent but.. in Luxembourg we speak at least 4 different languages fluently. It’s normal for us to use 4 different languages in one sentence. It mostly just confuses people so I don’t think it’s a talent per se, but it’s a weird thing we sometimes do here. You’ll just start a sentence in Luxembourgish, you don’t know a word so you use the French word, and then you use an English expression and for some reason, you might finish your sentence with a German word. It’s weird but very common.

Four languages! And you speak even more than just those. What will you do after you finish your bachelors?

I’m still trying to do a semester abroad. I applied to go to Tel Aviv in Israel but you can only put that in the interview if I actually get in hahaha. Spoiler alert: she did! If I have time before going abroad I would like to travel a bit if corona allows it. Otherwise I’ll just do fun stuff like sewing, learning new skills, finally becoming fluent in Dutch..

After that I would like to do my masters which I will probably do in HCI or AI and ethics. I don’t think I will stay in Nijmegen though. I need a break from the Netherlands for a while, hahaha. I think there is a high chance I will come back eventually, but I need to see something new, something else before coming back here.

Oh yes you travel a lot right? What’s your favorite place to go?

Morocco! Anyone that knows me knows I love the country for many different reasons. It’s such a pretty place, you have everything there! You have older cities, newer cities, desert, beach, mountains… The climate is great, the people are so nice and welcoming and it’s just.. the best honestly. I also speak French which helps a lot.

Well, I’m actually planning a small trip to Morocco as soon as I can. And in summer, me and a friend want to go to the US and combine that with Costa Rica or Mexico. But obviously, it all depends on what’s gonna happen corona wise. Who knows what the world looks like in a month, or a week even?

More than enough plans for the future I see. Then we’ve already come to the end of the interview. Do you have any shoutouts?

Obviously the AlmanaC 19-20, the WkC and the FC. I’m not gonna name any actual people because I’m scared I’ll forget someone. I do want to say you, Kim and Carla for sure.. But I’m gonna leave it at that so I don’t offend any other people haha.

Thank you for the interview Eléna!

After the interview Eléna shows me her sunny garden in Luxembourg and I get much Monoi content :D