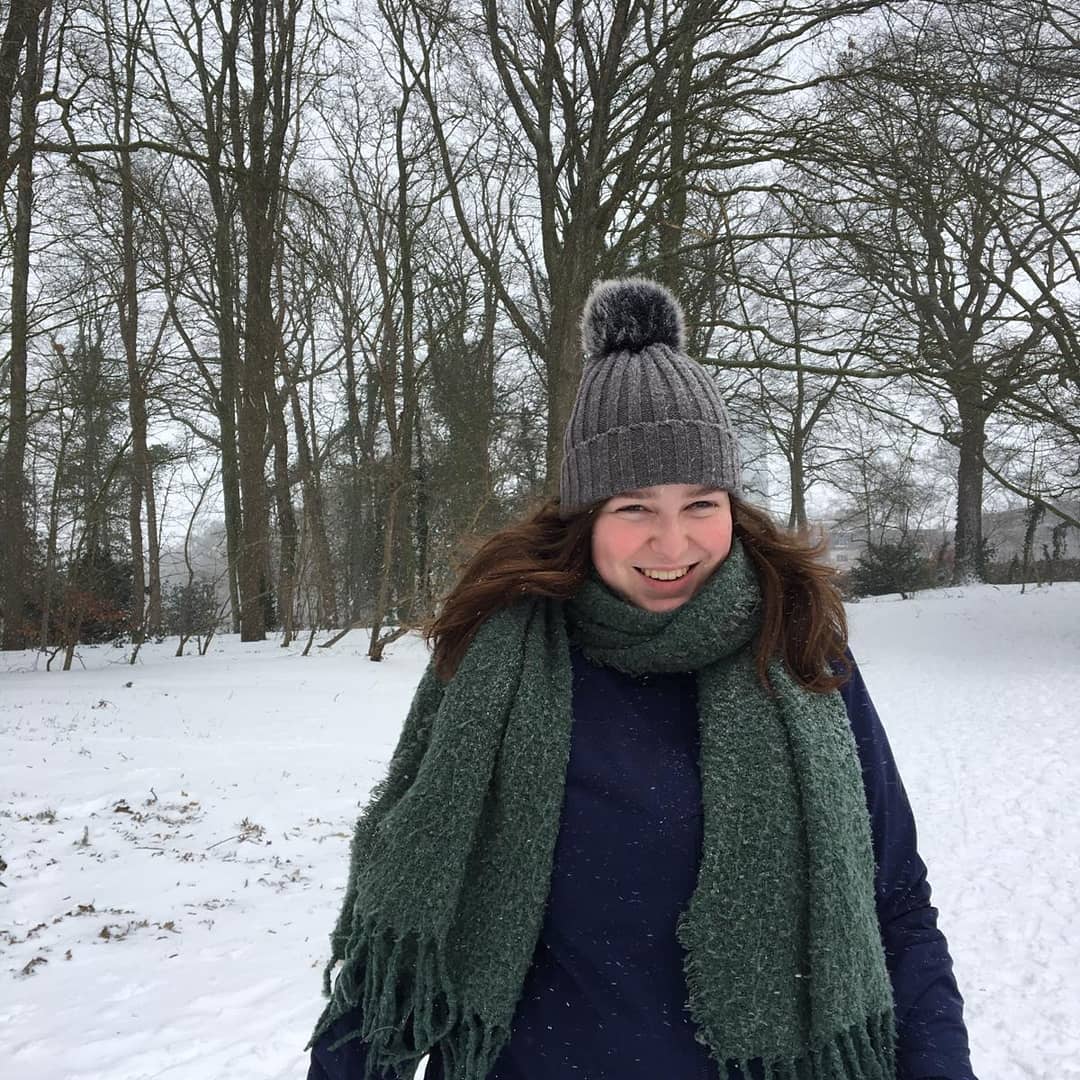 After some struggles regarding microphones and webcams, we started this amazing interview.

Most people have probably seen you come by already, but could you introduce yourself for those who don’t?

Yeah! I am Renske a third-year bachelor student. I am currently in four committees: The TraC, PC, LC and OrC. I like it a lot (surprise). Apart from that I really love games, video games board games, any type of game is amazing! I might be a little bit competitive. And next to all of that I really love baking!

Damn that’s very active! However, I also know you like that. I remember that you already applied for many committees at the start of your first year! Are there still some on your list that you haven’t had?

Well, I have always wanted to kind of join the Activities Committee actually! I think it is really cool that you have so much freedom in what you want to organise, which would be very nice. And if I do a master here I also think about joining the Master's Committee. And apart from that uhh *thinks about which committees there are*, well I think I already joined almost all committees I found interesting.

Very understandable you have indeed already done many of them. But now that you mention it, do you already have an idea about what kind of master you would want to do?

Noo totally not! I am currently following courses that are mostly from my second year so I still have time. So I don’t expect that I have to make that decision already next year. I try to postpone that choice as far in the future as possible. I have however joined some information things such as masters fair, but I haven’t found that one thing for me yet. I also haven’t taken all the courses up until now, so I can't fully form my opinion yet. However, my preference would be to stay in Nijmegen.

Seems like you really enjoy Nijmegen ;). But how did you end up here at AI in Nijmegen actually?

Well there were a lot of topics in studies I found interesting but none of them gave me a feeling of ‘This is what I want to do for the rest of my life’. So I just went to some open days (where they give some information) and enrolled for a lot of random studies there. By chance, I also enrolled for the info session of AI in Utrecht and that actually grabbed my attention quickly. After that I looked at other universities that offered AI and went to a study-for-a-day event in Nijmegen and Groningen. In the end I chose for Nijmegen.

Wow that is an interesting path. You found out about AI in Utrecht and then tried to get away from them to check out Groningen and Nijmegen (which is obviously the best choice).

It was mostly because Utrecht goes in the philosophical and psychological direction which I did not find as interesting. And also the studies here in Nijmegen and the one in Groningen are higher ranked. And Amsterdam as well but, yeah I definitely didn’t want to go there. Mostly because I come from a smaller city and I don’t really like the crowdedness of the ‘Randstad’. I wouldn’t like to be in a bigger city than Nijmegen, also because everything is way more expensive.

Oh yeah I didn’t even think of that indeed. But I am really happy you chose for Nijmegen cause now you are part of CognAC and we can enjoy your presence!!

No problem, but now that we are on the topic of enjoyment. What do you really like to do when you’re with friends? I guess (board-)games but also other things?

Yeah obviously! All kind of games though, but yeah I really enjoy board games!

Oeh which board games do you then have in your back pocket? Cause you now need to give everyone else some boardgame advice ;)

I would really say it depends on the group! If you have a group of people who don’t play that many board games I would suggest Ticket to Ride or the classic Catan. Mostly because those are easy to understand when you play them for the first time. But with hardcore board game fanatics I would go for Secret Hitler, Terraforming Mars, which I play a lot currently. It is a game where you go to Mars and have to make it habitable in different ways. Oh and another one is Betrayal at the House on the Hill *insert really excited Elizardo noises*.

Sorry for that, but I also have it and it is my favourite!

I also really enjoy it, I have sadly only played it a few times. A friend of mine had it and we thought we would play it super often, but then sadly Corona hit and we couldn’t. However, I am still considering buying it and then convincing my roommates to have a board game evening with me to play it. But in general I think I don’t really have plans of what to do with friends. I just really like going for a stroll, or just grabbing a coffee or tea and having a talk together. And obviously making cocktails together and drinking them!

Cocktails are always a good option for drinks, but you can also quickly drink too many of them. This is actually a really nice 'bridge' to my next question. Do you have a hangover item (dish or drink) that you always use?

If I am hungover I am normally not that hungry so I just eat some grapes. I love them, especially when I have a hangover. But another good option is a smoothie or something fresh with some fruit. I had some frozen fruits in my freezer for a long time so I often made one with Pineapple, Mango, Bananas and Orange juice. It is the best smoothie ever, I really recommend it!! When I have one of those I can often survive the rest of the day in a normal manner.

Now that we are on the topic of recommendations, what are other things that you recommend to people who read this?

Join a committee! I met a lot of people there and have some good memories of it. Also you should totally get a room in Nijmegen! Like I have a lot of friends that didn’t/don’t live in Nijmegen. But it really adds to your study experience so I would definitely recommend that. An addition that was made later: I also really recommend people to get an ice cream machine! You can just throw anything that is blended in there and you just get ice cream! You use it more often than you’d expect, especially during the summer.

A trip with the Travel Committee :’). We would have gone to Toronto last year but just before we would go we went into lockdown. I really hope the trip of next year can continue. I don’t think we go to Toronto, but I wish I am still able to go there one day. Especially since we found so many cool things there after all our research.

Oof don’t mention it, I think the entire TraC was devastated after that news. Maybe we should move onto a brighter topic. What are your personal guilty pleasures? It could be anything, ranging from music to food or something else.

Trashy reality TV! All those series such as Desperate housewives, Are you the One?, and the Circle. I can really enjoy such shows. My mom and I binged so many episodes together, I can't even count them. Another one is Taylor Swift, but she is really cool so it isn’t really a *guilty* pleasure. Elizardo gives Renske the ‘Are you sure?’-look. Well, only the first few would be actual guilty pleasures but that does not take away that they are still amazing! I would go full karaoke on Taylor Swift!

That’s a big mood lol. But do you then also like to ‘Just Dance’?

Uuhhh, just one is more than enough hahaha. I am not a good dancer, I am also not a good singer but that is for another time.

I guess I’ll find out during the Orientation then. I also wanted to ask you something different. What is actually your favourite CognAC memory?

Give me a second. I know this isn’t a good sign but I often think about things I did with CognAC. However, the moment you ask me this I forget everything I have ever done. But I would say the Lustrum Quiz, I participated with two of my friends. That was a lot of fun especially since that was one of the first kind of hybrid activities. I also really liked the 1C night in my first year, because it was the first activity where I helped with the organisation. I also loved the Cantus we (1C) organised. Those are the ones that I immediately think of so that means they are kind of my favourites.

I indeed also still remember the movie night, it was a lot of fun. Do you feel like you miss such things now? Or let me rephrase, what do you currently miss within CognAC?

Physical activities! No but apart from that, I would say a hoodie with just the normal CognAC logo in a colour like this *shows lustrum merch*. So I’d say have different, better, colours. It is pretty specific but that was the first thing that came to mind. Uh and maybe a bigger Board Room.

Well actually it is already bigger than before! *Shows the new BK via the webcam and manages to hit his knee against the table* Ouch, I am not clumsy or anything. But on another note, what kind of pet would we need for CognAC?

A cat! Imagine, we have a super soft cat that just walks around In the BK. People would then definitely come to the BK and we would have a small cat café!! We would then already have a board-game corner and..

*The postman interrupts the interview, a new board game arrived (surprise)*

Where were we? Oh yeah the cat café, we need it. We need more cats, more cats are more better. We could become like a shelter where we take in pregnant cats and give the kittens to CognAC members. And when all the kittens are adopted we save a new pregnant cat and repeat it. How awesome would that be!!

That would indeed be amazing. I think we would have a lot of visitors in the BK then, and not just CognAC members. But this brings me to my last question, do you have any shoutouts?

Pipje my cat at home, whom I miss a lot! The board for being such cuties! My intro parents Jorrit, Aline and Jake because they hyped me up for CognAC and committees. And a shoutout to the two cats in my neighbourhood which me and my roommates often pet and feed. Oh and of course to that one cat on the Halloweekend of last year, ‘The Cognoekel Puppie’.

Awh those are such wholesome shoutouts, a nice happy ending! Thank you for the interview and I hope we can play board games together soon!