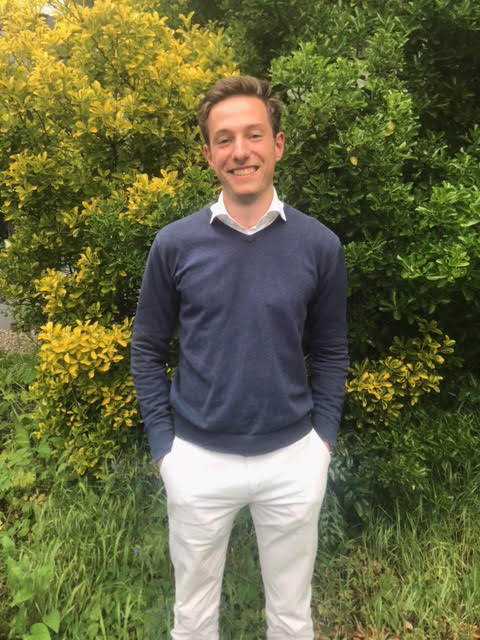 Small speedrun about Eloy’s life. Can you introduce yourself a little bit?

I am Eloy Wijlhuizen, I am 22 years old and a first-year student, or at least a third-time first-year student, AI is my third study. Before this, I did Philosophy in Leiden and after that, I wanted to do something else and tried ALPO (Pedagogical Sciences) here at Radboud University and the HAN. After that, I miraculously ended up at AI. One day before the deadline, a friend said “Hey Eloy, this might be something for you!”. There was, of course, the numerus fixus, so I tried to write a motivational letter in one day and asked my friend to check it. It was a miracle I got in and I have my boy to thank for it.

What was interesting about AI?

Well, my problem and also why I started with philosophy is that I like every subject and that I find everything interesting: law, archeology, arts. I really didn’t know what to do and what do you do when you don’t know what to do? Start studying philosophy! I took ALPO here at Radboud and I really liked statistics, I took some data science courses at TU Eindhoven and talked to a friend of mine from primary school who suggested I need more social science in my life so last minute I applied to AI and I’ve enjoyed it ever since.

(Very nice, glad you could make it in.)

What is your favorite course(s) so far?

The meme is that I didn’t like the courses so far and I am still waiting for Societal Impact because of my philosophy background and because of Pim and Giulio (everyone’s favorite duo). I really enjoyed Academic Skills, because I actually read a lot of papers in my spare time and I liked that there was a lot of collaboration. I am into the academic side, which is also why I joined the SymCo (spoilers!!!).

And a least favorite one?

(very quick very straight answer) OOP. I don’t like programming. I like being outside and not behind my computer. Sadly, I chose the wrong study for that (also the wrong year to join). Programming is a very important tool to learn, however, I would be very glad that, when I start working, I only have to do a minimal amount of programming.

Do you have any pets at home?

Funny story, at my parents’ house we had a cat called Buurvrouw. Our close friends had 2 rats, named after a childhood series “Buurman en Buurman”. One of them died and on the exact day, we happened to get a cat so we named her after the rat. She was a horrible cat. Currently, I am “adopting” (if you can legally prove that haha) the cat of our neighbors. I have a door to the garden and the cat sometimes strolls into my room and I give it treats. Not our cat yet, it will have to decide for itself.

Where do you live?

I currently live in Nijmegen at a very nice place that, for some reason, shows up as a hotel on Google Maps. Sometimes people even leave reviews!!

From the beginning of June, I will start working again, so that means I will have to travel back to my hometown, Apeldoorn. I am originally from Brabant, Nuenen!! In Apeldoorn, I work at a museum/ library, where I basically get paid to study. I sit behind a desk and sometimes hand out tickets or have cultural conversations with elderly people that have all the time in the world. I will probably quit the job because it doesn’t provide a lot of learning opportunities, I could make a robot that would easily do my job for me. I also want to commit my time to be in Nijmegen since I am also applying to become a mentor next year for APS.

What do you do in your free time?

Can you tell us a bit more about the band?

When I was in Leiden, I joined a student association and also lived in their house. In Leiden, everything is very vo’ and stuko (Eloy is kind enough to spell that out for me) but when I came here it was not my plan to join one again. In the end, I somehow ended up at a student association anyways and also in a band, Beter Dat Je Lid Band. We just came up with a music number and it’s going to be on Spotify. It was amazing working on it because everyone had only 4 hours of sleep, no breakfast and at 9:00 am they started offering us beers. We only had our breakfast at 4. It was worth it in the end, we made it for a music festival.

Haha, no, it’s the AHC this Wednesday (the 26th) and we had to even make a music video. It’s a competition with the largest Catholic student associations in the Netherlands. We already listened to the other songs, it will be unfortunate but we might win (spoiler alert, they did win, you can listen to the song at https://youtu.be/-H0wR0Pw0Cw ). We don’t have the resources to organize it next year so we’re praying for second place.

I play guitar and the drummer is, at least in my opinion, a better guitarist than me. In the last couple of weeks, a lot of the people in the association wanted to join. I don’t mind another guitarist because I am not in the band to be awesome but to make great music. (a humble king)

At this point, Giulio passes by and we both fangirl a bit.

What do you think the biggest difference between a study and a student association is?

The study association helps develop skills more and the student one is more for funsies. Both help to broaden your views and get you drunk.

Nice one. You’ve hinted at your committee work, but how did you get into CognAC?

I really wanted to push myself to become active in student life. In previous years, I was fully focusing on studies and that was not doing it for me. I thought about how I could develop myself and the first thing that came to mind was the SymCo. I enjoy the academic side of it and I like reading about other people and theories and such. I am hyped to invite speakers and have a small academic crush on them and especially I am very hyped about who we have this year for ACAIS! For the OrC, I’ve had my fair share of introductions so I am somewhat an expert at what’s it like to be an intro kiddo. In general, I really enjoy just throwing a party for someone, I feel I am always bad at participating in a party but I am better at organizing one.

Anything special you’re working on?

Hmm this event with some people online… and partly physically as well…on the first of June, with a lot of talks, be there or be square! (Summary: come to the symposium!!) And of course, the orientation, if any of the new years are reading this- hey!!! It’s gonna be awesome.

Well, the SymCo is my baby, I will be in it throughout my studies unless someone kicks me out. I also love the OrC so it’s difficult to think of another one. Maybe the Parents Day committee (we debate a bit if this is a serious or a fun committee, Eloy says he is always having fun in his committees so they are all fun ones).

What do you think CognAC really needs?

Eloy asks if this is the pet question. Other answers are also accepted 😊

Whenever I talk to people about AI, they comment on how we actually study something practical. I also believe that when you receive something, it is nice to give back. CognAC has the tools to somehow be more active, not only in student life but also in voluntary work or something along those lines. For example, having a committee that applies our skills to help out small communities with technical jobs, like creating an administration program in an elderly home. Not sure if this is too difficult or if we’re even qualified. In our student life, we party a lot, or at least we used to, no, we WILL party a lot, but it’s also good to give back to the community.

Very sweet, we will take this into account! But if you were to answer the pet question? :)))

Have you ever watched Community? It’s a series about a community college, they have this creepy but fun mascot. It’s not an animal but it would be a good pet. It’s called “Human Being”, which would be fun to have instead of a robot. (Please look this up, it’s an experience.)

We also should not get any real pets. For every other association that I know, that has pets, the life expectancy is 3 months.

Besides committee work, you also worked on the alumni blog?

Yes, it’s about giving our current students a perspective on who is in CognAC, even from back when it was under the Cognitive Sciences name. I find it interesting and helpful to see where people end up, I enjoy listening to stories about where they were and where they are now, as well as having the opportunity to learn from that. I have some big plans so I am looking forward to doing this for the next couple of years.

Speaking of, have you already thought about what you want to do after AI?

I am trying to fit in a minor in Society and Ethics at the University of Utrecht and that fits in with the idea of a Master in Applied Ethics. That’s why I also said I am looking forward to Societal Impact. I want to use philosophy and to ground it in real life, rather than talking about life, and divinity, and literature.

Sticking to philosophical things, what is your life motto?

I can’t choose, I have 2: one is something my grandma always told me: “just try your best”. This was funny because I was a teenager when she would say this and I was very confused –trying my best in what??? I can try my best at sleeping, but that’s probably not what she meant. It's very ambiguous, but I am trying to work out what it actually means. The second one is something I learned through my family, my father, mother, and also my brother, so I don’t forget him, which is “give back”. Strangely, sometimes we don’t realize that we’re in such a privileged position and it’s our responsibility to give back. I usually take a lot but this is a very important thing I strive for.

We’ve now reached the end of the interview! Do you have any shout-outs?

Shout out to Jorrit’s vriep!!! It was misspelled and since then we don’t call ourselves Jorrit’s group but a vriep. Don’t know how a big spelling error like this happened but we went along with it. Shout out to the CognAC board because you guys are doing a great job (swear I didn’t pay him to say this). I can imagine it’s very difficult this year not seeing that many people and still having to put in the work. I enjoy being around people so I can understand the struggle. Next, shout out to Friedrich Nietzsche, my boi, I’ve been reading up on him a lot lately. Not a shout out but big thanks to my friends and family who helped me end up where I am, sometimes I hate them but that’s just how life is and mainly I am grateful. Of course, shout out to my committee members!!!

Nice! Thank you for this interview and for all your work in CognAC!