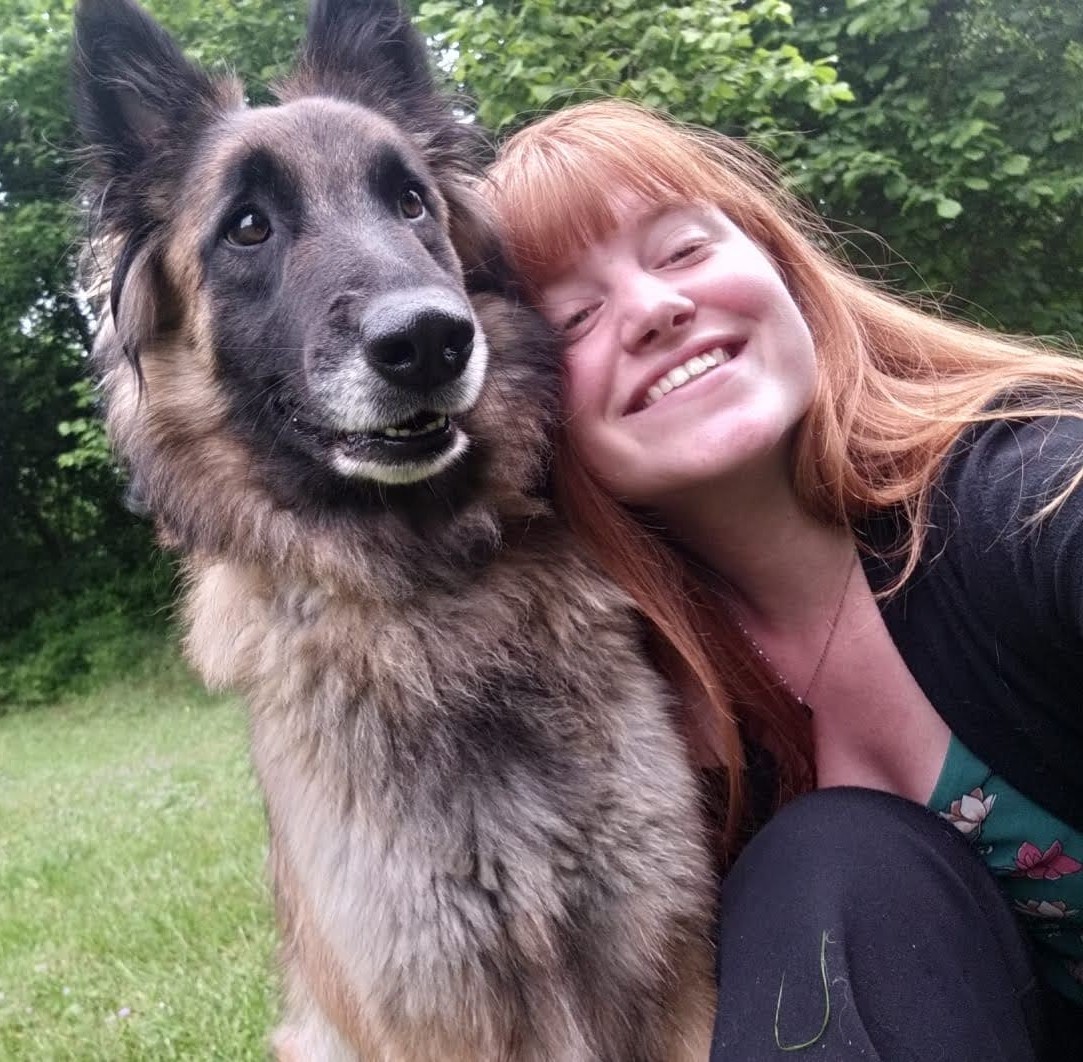 Welcome to the interview, Fenna! First of all, congratulations for being this month’s AI*! Can you introduce yourself a bit?

I am Fenna Rasing, I am 19 years old, and currently in the second year of AI. I live in Didam (between Arnhem and Doetinchem) but I’ve had a room in Nijmegen for about half a year, and next year I’m going to be the treasurer of CognAC!

So exciting! To start, can you tell us a little about how you decided to do this study?

I have a really hard time making choices so it was pretty hard. I didn’t want to do anything very specific; I was looking for something broader. I had CS in high school and enjoyed it so I wanted to do something in that direction but just CS would have been too much for me. I am also interested in psychology so I thought AI was the perfect combination.  I love it so far, some courses are better than others (ooo spill the tea), for example, Professional Skills this year (this is where I assure Fenna no one will come after her), the idea for the course sounds great but I don’t feel like I’ve learned anything. I made an essay in 3 hours and almost got full points.

What was your favorite course so far?

Brain and Formal Reasoning. There’s a big difference between them but I liked both of them.

Do you already have an idea of what you want to do after AI?

No clue, another choice I’m not good at!

What’s your favorite memory so far?

I love it when you’re in a workgroup and you’re so tired that everything is funny. I like doing nothing with friends at uni.

Those were good times. How has this online year and a half been for you?

I think I adapted well; I have definitely skipped some 8:30 lectures but I think it’s fine :). Having a room here helped even though there were some weeks when I didn’t really use it, but I am part of Phocas (the rowing association) so when that started again I was in Nijmegen more often. I am also part of Dance Fever so it was great having a place in Nijmegen to keep up with social activities.

I joined Phocas to have more social interactions; I am part of a rowing team with 7 people and we have training once a week. We sometimes meet up to eat together, which is very fun. In Dance Fever I do modern jazz. I am a beginner so it’s not very good yet but I really enjoy it. I also do ballroom dancing, for about 5 years now.

What about life at home?

I have a sister that’s 1 and a half year older than me, she studies at an art academy in Enschede, so she’s the creative one. We get along pretty well, but it hasn’t always been like that. When we were young, she got annoyed at me a lot when I did nothing wrong, for example she’d ask me “why are you breathing so loudly?”. When she was cranky, she would only get angry at me. Of course, I would stand up to her and tell her she’s angry for nothing. I wouldn’t just breathe softer for her. (haha glad you can breathe in peace now)

I also have a dog at home, her name is Balou, though she’s not as big as a bear. She’s a Belgian Shepherd so she’s very cute.

What’s a memory that you hold very dear?

I comment that ballroom dancing is pretty close to a star. Fenna says she doesn’t really perform, but it’s all about the attitude!!!

What are some hobbies you like to do in your free time?

I like Netflix. There are some phases when I read a lot, some when I watch a lot of Netflix, so it really depends on when you’re asking. I also like walking my dog.

Can you give us your top recommendations?

Books- With books it’s a different problem, after I read a book it becomes my favorite, so it’s hard to think of the one I like the most. If I had to choose, Harry Potter is always good.

Music- The band Nothing but Thieves.

What’s your favorite thing to do in Nijmegen?

I love going to the Waalbeach, sometimes alone to read a book, or with friends to drink a beer. After corona is over, I would like to go to festivals. I used to do that a lot before, so now it’s on the top of my list for when things get better.

What about plans for this summer?

Probably going away with some friends for a few days, but we haven’t booked anything yet. We will maybe also go visit family in Germany. We have cousins of my mom there, and one of them has something like an Airbnb, so we would like to take advantage of that.

Wildcard question: what’s a recipe that you recommend?

I think spinach lasagna since I am vegetarian. I didn’t use to eat a lot of meat, but then I saw a video by Arjen Lubach about slaughterhouses so I decided to actually go vegetarian, though I’m not very good at it. I still eat some fish and recently I cheated with chicken as well. We do have a lot of nice substitutes here so that helps a lot.

Your efforts are still valid <3

Now, spill the tea. How did you actually get to join CognAC?

Well, in the intro week, they told me to join CognAC so I did (cue laughter). I wonder who was that, was it my intro mom??? (a joint hmmm sound can be heard)

Even before the intro, I was a student for a day and the person that showed me around was in the 1C. I joined a meeting and that gave me the inspiration to join 1C myself. Becoming a chair was a spontaneous thing, no one was really enthusiastic about it and I thought it would be a good learning experience, so I guess I just did it.

I really enjoyed being the chair, I am not really an extroverted person but that doesn’t really matter as long as you can hold a meeting. I usually don’t have to yell very loudly! I also joined the Weekend Committee, where I wasn’t originally the chair but I volunteered once the opportunity came and again, had no competition, so it was pretty easy.

How is that going?

At first, we only had 4 committee members which was pretty hard, but recently we promoted the committee and got 7 new members, so I guess that worked very well! I am very excited to have a meeting with the new members!

I am also in the Study Committee, as I wanted to do a more serious committee since the other 2 are more on the fun side. I haven’t been that active yet since I joined recently.

Micha interrupts us as we are sitting in the Common Ground. He drops a box and is generally very loud. smh

Are there any committees you want to do, or a committee idea you have?

I applied for the Lustrum Committee and I’m also thinking about the External Committee but that might be too much. If I were to make a new committee, it would be maybe something music-related.

On that topic, what do you think CognAC needs?

A pet would be nice, but don’t think that would be very good for it (everyone has very low faith in us keeping an animal alive). I would like to have a room for ourselves where we could party with just our members, and also have a bar.

How did you decide to apply for the board?

Last year it popped in my head that it would be a very good experience but I didn’t think I could do it. Half a year went by and I convinced myself to give it a go, it was actually my New Years’ resolution to just try and apply, but I actually got in! I really enjoy it so far; I like both the future and the current board. The Election GMM was pretty stressful but I think it went fine in the end, I am happy that we got voted in and that I can start preparing for next year!

I had one working session with Laura where we did the Incasso, it was pretty easy as you just have to fill in names and numbers. I didn’t expect it but I really liked making the budget, you have to think ahead to what you want to do, it’s not all about money.

Another wild board member appears! This time it’s Noa! The next 2 questions are on behalf of her:

The first thing that comes to mind is doing an exchange in Hungary. My high school was partnered with this city in Hungary, so that’s how we got to go. I stayed at someone’s place, it was a very weird experience to be in another country in this random person’s room, but I enjoyed it a lot. They also visited us in the Netherlands, so we got to show them our beautiful culture.

What do you look forward to the most in your board year?

I’m really excited for the lustrum. I think it will be very fun since it will be in person. If I could have one activity during that week, I would love to have a silent disco. It would also be cool to go to an amusement park, though that’s probably very expensive.

I’m also going to be an intro mentor this year which I’m excited about, I hope this year gets to be more like our own intro. I’ll be very strict as a mom. (nobody believed that) Nah, I’ll probably be the fun mom. The other mentor parents are Lasse and Cis, which is pretty nice. If I’m the good cop, I hope Cis or Lasse will be the bad cop.

Sounds like a great strategy! Speaking of, what is your life motto?

I don’t really have one but when I stress about something like a presentation, I always think to myself that in a year or so, nobody’s going to remember and that it won’t matter if something goes wrong, so there’s no point in stressing about it.

That is indeed great advice! And with that, we’ve reached the end and it’s time for the shout-outs!