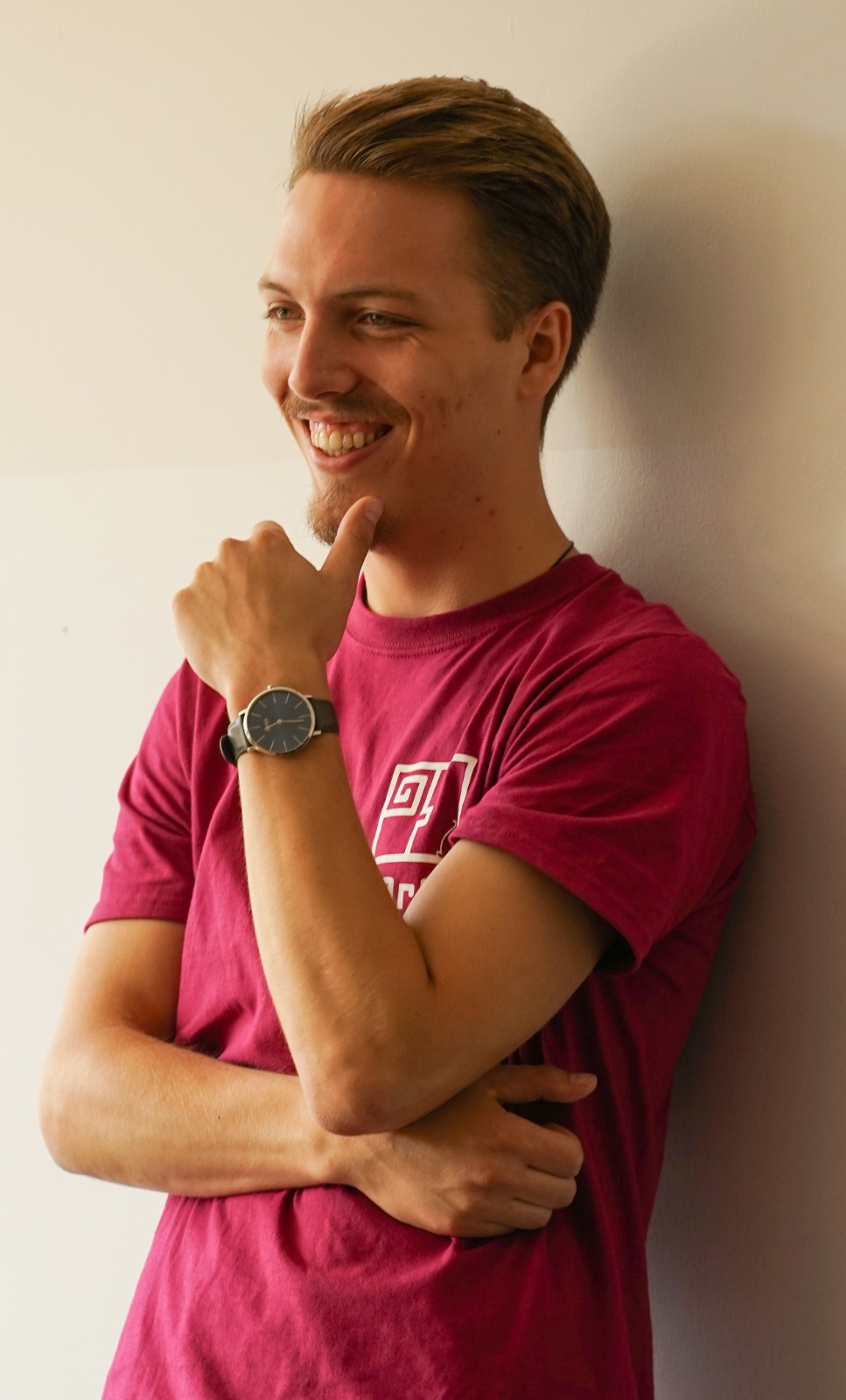 Congratulations on becoming AI* of September! Can you introduce yourself a bit?

My name is Tijmen de Haas, I am 21 years old and a third year student at AI. I am a member of the Orientation Committee (OrC) and I actually have only been an active member since this past introduction week.

Why did you decide to become an active member?

It was actually quite a spontaneous decision. On the first Sunday of the orientation week I was asked by the OrC if I could help them by letting some intro kids crash at my place. I of course wanted to help them out and when I went to pick up the intro kids on Monday I found out the OrC was actually in need of an extra pair of hands during the whole week. I decided that I could help them, so I became a sort-of OrCie :)

So you just sacrificed your whole week to help organize an orientation week you were completely unprepared for, why?

I was already getting involved because I had the kids that slept at my house and I knew some of the OrCies as friends already, so I thought it would be fun to help out more!

Of course being in the OrC is fun, but at times it is also stressful. You never thought about just quitting when it became chaotic?

Good question. I did only officially become an OrC member on the last day of the introduction week so I could’ve left at any time, but I didn’t want to let down the OrC.

Doing this did end up getting you nominated for AI* of the month September, yay! How do you feel about becoming AI*?

I was very surprised! Usually it’s something reserved for members who have been active for a longer time. When Cis invited me to join the CognAC evening it did run through my head, but I thought it couldn’t be true haha. It feels a bit strange, but I am very grateful.

What do you see yourself doing at CognAC this year?

I am unsure yet how much I’ll be doing exactly, mostly because I don’t know how much time I will have left. If I would have the time, I would like to join more committees, like the AC, the DAtA or the GameCo.

What do you like about being a member of CognAC in general?

So many things! In the first year CognAC mostly helped me to meet new people, both other first years and also older years. It was especially useful to meet the older years because they also had a lot of good advice for me. What I also like about being a member is that everything is so laid-back and completely voluntary, you never feel obligated to do something or go somewhere, you just go to the things you find fun or interesting :) Some of my favourite activities are the SC activities, such as the Course Workshops. They really helped me pass some difficult courses…

Do you have any favourite activities?

That’s hard to say, since I haven’t experienced a lot of them (properly) yet. During my first year I did not have a room in Nijmegen so I couldn’t join a lot of activities, though I did always make an effort to join the DAtA drinks!

What CognAC activities are still on your bucket list?

The CognAC Weekend definitely! Or the TraC trip, but that is always so hard to get into…

Unless you’re part of the committee of course ;)

Do you have a favourite memory of CognAC?

If there is one moment I would have to choose, it would be the last day of the most recent Orientation Week. That was the day I signed that NDA so I was officially in the committee then. When the committee did their ‘thank you’-speech to the participants Jelle tried to thank me but he called me Herman instead of Tijmen. It only made the moment more memorable though ;)

So the big question; are you staying in the OrC for next year?

I honestly don’t have a good reason… At first I didn’t even consider it as a study at all, but I went to see Frank’s talk at the Bachelor Open Day and that really convinced me to come study AI here!

So we should thank Frank for getting you here?

Yes, well I have to promote him, I am an APS mentor after all ;)

Wow, that's really cool! Why did you choose to become a mentor?

I wanted to do it for a longer time, but at the end of my first year I was uncertain about leading a group of first years. However I gained some confidence during the second year and I got a lot of encouragement from my friends! Also a quick shoutout to my group; Lucky 13!

Have you had any favourite courses so far?

Before I got into the study I was already very excited about the brain, so any course that involves the brain I really enjoy(ed)! I was also pleasantly surprised by how much I liked Formal Reasoning, it was a truly awesome course. Especially Freek, very cool dude!

Formal Reasoning is really more of a Computing Science course though, are you thinking of maybe going more towards CS later in your studies?

I would, but I am really passionate about the neuroscience courses and I do not want to give those up.

You mentioned earlier you are already a third years, is there anything specific you see yourself doing after you finish your Bachelor?

I was lucky enough not to encounter too many troubles with studying last year so I can see how it could happen that I graduate this year, but it can sometimes still be a bit much or a bit difficult to balance, so I might not finish after all. I do know that after I get my degree I want to stay in Nijmegen! I really like it here and I have been looking at the AI Masters already. There is a Master Fair soon, so I will probably go there to check them out :)

Maybe you can also shed some light on your life back home, what is it like?

I am from a village called Teteringen, which is near Breda in Noord-Brabant. I was born in Tilburg though, which is Breda’s rival city… I am part of an orchestra there, I’ve actually been playing music since I was eight years old. I started playing drums and all sorts of percussion instruments. Then around my 17th or 18th I picked up playing the guitar and since past February I have been taking singing lessons! I also play in a band with some other AI students :)

You are a very musical guy! I wonder how you convinced your parents to let you play the drums as an eight year old…

They had sent me to an exploration course on musical instruments, that’s where I found out how much I liked playing the drums. At first I had a real drum kit, but after a while my parents did end up regretting that lol. They got me an electrical one instead, which was also very nice to play! I was just a very enthusiastic kid, I got inspired by all kinds of things. For example, a song that had inspired me was Music by John Miles. Definitely recommend you take a listen!

I definitely will! I wonder what your favourite genre of music is?

Usually I listen to rock or something similar to rock music, but I also listen to a lot of 50’s music, movie soundtracks, rap and much much more. I probably would vibe to anything, except for maybe top 50 music.

Apart from being incredibly musical, what else do you enjoy doing in your time off?

When I am not playing music (which doesn’t leave room for a lot else), I like to watch movies or series. My favourite movie is definitely The Godfather.

Do you also have some favourite directors?

Yes of course! I like Christopher Nolan, Quentin Tarantino and Guy Richie’s works a lot.

So you watch a lot of action movies, is that your favourite genre?

100%, definitely! But not the generic ones and I also like thrillers a lot! If you want to watch a good thriller, I highly recommend watching Seven!

Sadly our conversation has now almost come to an end, is there anything you would like to share with your fellow CognACcies?

Find a committee that is in urgent need for help and they will be very grateful! It will also possibly come with a free AI* nomination ;)

We’ll see about that… Last but not least, who deserves a shoutout?

The very brave people of the OrC, also the Peoples (you know who you are) and Lucky 13 again!! And of course also the XXXI Board and all the other Cognoekels, I wish them all the best!