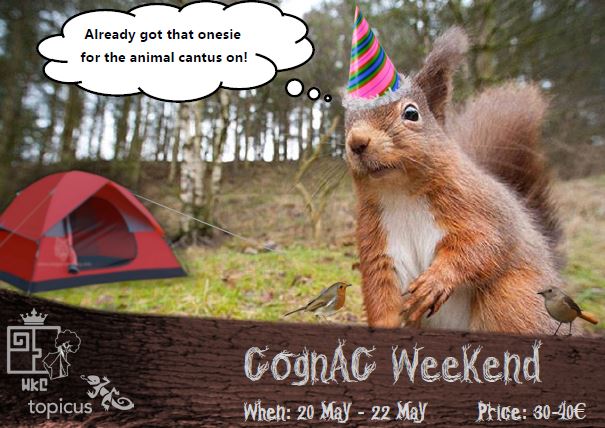 The weekend from the 20th to 22nd of May certainly was an unforgettable one (though they may not be remembered very well due to big amounts of beer) for a lot of AI’ers from both Nijmegen and Linköping: It was time for the annual CognAC weekend.

I was told that the CognAC weekend had always been a quite big and great event. This year it was bound to be even more awesome than before, as it was now also part of the Lustrumweek.  Naturally we all wanted to celebrate the 25th birthday of our beloved study association in the most abundant and resplendent way.

By now the CognAC weekend is already more than a month ago, the perfect time to retrieve some memories and get a bit nostalgic. That is why the MC has decided to tell you about some of the highlights of these good days.

Gotcha is always a cruel game that can bring out the worst behaviour in the nicest and most innocent people. Manipulation, betrayal, and boys crying for their mother will undoubtedly be a result of this slaughter-game. Therefore this activity couldn’t be missed in the CognAC weekend! Instead of the original version of Gotcha, we played a version where each person got a target and a target word. Killings were made when someone made their target say the given target word. In the beginning, Gotcha needed a bit of a warming up, until the first murders were committed. But on Saturday a lot of blood was shed in the famous ‘Circle of Death’: About 15-20 people sat in a circle, trying to make other people say the most random words like e.g. “Knitting Needle” or “Bead Necklace”.

As no one wanted to be a coward, people got more and more reckless with saying these words. Therefore needless to say, this became fatal to many poor victims.

As mentioned before, not only members of CognAC were at the Weekend, but also some members of ‘KogVet’, the Swedish study association for 'Cognitive Sciences' in Linköping. The Swedes were very nice people that were open to share some of their Swedish traditions and vocabulary with us. It was fun to learn about their ‘nice and ugly dinners’ and to hear them enthusiastically sing Swedish drinking songs at the ‘Bonte Avond’. I hope that I might see them in Sweden next year and until then I’ll try to not forget the Swedish word ‘Fulvin’.

The Bonte Avond was the moment for us CognAC’ers (and for a couple of Swedes) to shine on the stage. Some had prepared themselves long before the weekend had even started. Some managed to put something together on the day itself. We started with a hilarious real-life version of the Pokémon game and anime, which sure brought some nostalgic feelings to all of us. Then all the Swedes & Marlen brought some nicely sung Swedish songs to our ears. They all prepared themselves quite well for the Cantus already. After the nice melodies and lyrics we did not really understand (it still sounded awesome though), it was time for some extra singing and dancing from the one and only BoyCo! This was the very first performance of the BoyCo, too bad if you missed it.  At the very end of the Bonte Avond, all of us who couldn’t join the Berlin journey, could still taste the feeling of it. The Berlin group showed us the joy and laughter they had experienced during their trip, ending with some nice energizers. I felt like a little bird.

Needless to say, the Bonte Avond also had a winner. After watching the four performances, I was just glad that I was not a jury member. I had enjoyed them all and could just walk away with a great feeling inside, not wondering about who would deserve the big prize the most. The judges however had to make a decision in the end. The winner of the Bonte Avond 2016 was … *drum role* … the Pokémon crew!

What a great evening.

“On the crate, on the crate on the craaate”. Whenever I think back about the Cantus, these are the first words that pop into my mind. For me, as for a lot of other people, it was the first Cantus I’ve ever been to and I’d got the feeling that everybody was just a tiny bit scared of what to expect from this activity.

But in the end we all turned out to have a really good and hilarious time there! It was fun to see how everybody in their animal onesie started to become more and more like real animals with every ‘ad fundum’ of beer that was taken. People started to dance on their tables like a horde of wild monkeys, singing classical songs like “Brabant”, “Piano Man” and “Wannabe”, probably sounding like a combination of whining cats and a dying whale. It did sound amazing to us, but our perception might have been biased due to a bit of beer.

As typical for a Cantus, nasty punishments were given for not following the rules of the Cantus codex. Maybe the worst punishment of all was the so called ‘Ad Vomit’: drinking a glass full of beer mixed with the rest-overs of the dinner of the previous day: tomato sauce and chocolate pudding. A drink so disgusting that legend says that drinking a sip of this mixture will make a little part of your stomach die painfully.

Well prosit praesidium, prosit corona and thanks for a great night!

I can say without doubt that I enjoyed every part of the weekend, also the ones that are not explicitly mentioned here: whether playing Poker at games night or getting hopelessly lost with the ‘speurtocht’. A big thank you therefore to the WkC for this awesome experience. Hope to hear again from you next year!