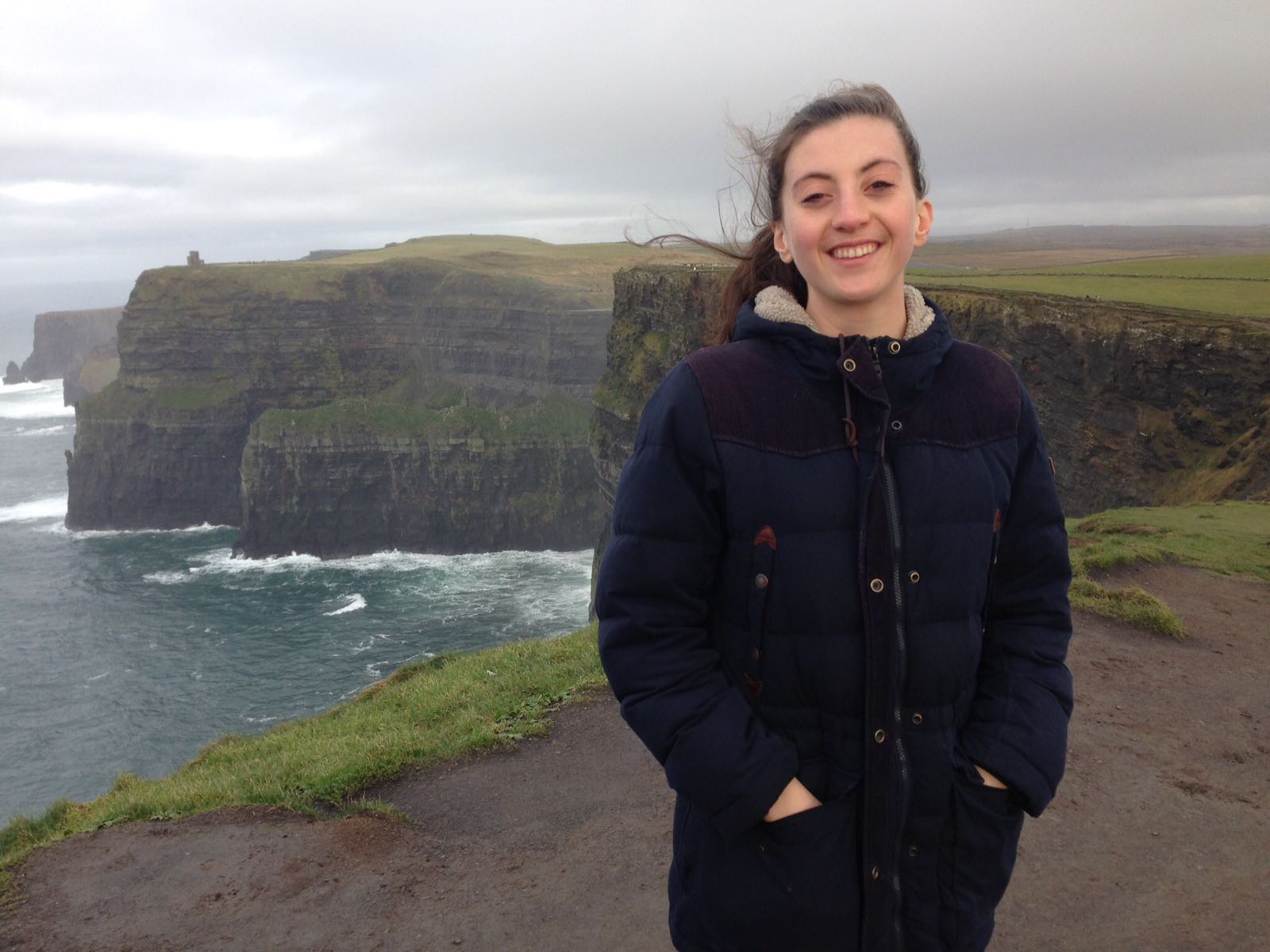 - So Isabel, share with us your background? Where are you from?

Oh wow, where do I start? Well, my name is Isabel, and I’m from Stavanger, Norway. The most beautiful city in the world! At least on a sunny day, haha. Nijmegen is also very beautiful. I’m 21 years old, turning 22 in November this year. Now everyone knows, so I’m expecting lots of presents (no just kidding). I had two gap years before I came here, so this is my first year of studying. In Norway, it’s actually more ‘socially acceptable’ than in the Netherlands to start our Bachelors around the age of 20-21, or later. Not that many people start their study at a young age there, so it was a little bit surprising that everyone’s so young here. What else…? I have a twin sister, but we’re not identical! At least we don’t think so. People always ask me that, haha.

- Did you experience a culture shock when you came to the Netherlands?

Personally, I don’t think I’ve ever really had a culture shock, but of course there were some challenges with moving here. What was difficult in the beginning was to figure out where everything was. For example, in the intro week I needed to go to the store. Not only did I not know in which direction to go, but I also had no clue what the grocery stores here are even called. So, I spent a lot of time biking in the wrong direction looking for supermarkets and the sort.

There are of course also some social differences between here and home. For example, the Dutch people are in general quite open and social at all times, while in Norway people are usually more private in normal settings, and then, when drinking, we suddenly become best friends with everyone. We literally go from barely talking to a full-on conversation, like 0 to 100. I really like the Dutch way of socializing, even though I do miss the occasional chats with totally random people when I go out.

One last thing, but everyone says this, Dutch people are really direct (Zikri nods in agreement). Back where I’m from, we say that we ‘går rundt grøten’, which translates directly to: ‘walking around the porridge’. It has the same meaning as beating around the bush in English (for you Dutchies out there, it’s “rond de pot draaien”). Point being that Norwegians are not direct at all, so when people here tell me something that’s wrong I almost always think: wow, this must be really serious for them to even mention this. But then I eventually remember that that’s just the way people confront each other here.

But to answer your question: I didn’t really experience any culture shock. I’ve travelled a lot throughout my life so maybe I’ve just gotten used to new environments, or I just don’t experience it.

OHH! This is a ‘culture shock’ so to say: As a Norwegian, beer here is very cheap. At home, a beer is almost 10 euros when you buy it in the bar. (Hope I didn’t scare anyone from visiting Norway now). So when we would go out at home, if someone bought a drink for me, I’d feel so honoured. Like someone just spent 10 euros for me! On a drink! In any case, it was so weird seeing people casually buying a round of beer for everyone. I remember thinking to myself, “who are these millionaires!?”. It was definitely a shocker, especially during intro week.

- How did you find our AI degree? Like how did you come across AI at Radboud University? And why Netherlands?

I was actually just looking at Google for something robotics related, and then RU was one of the first things that popped up. I also didn’t apply to any other country (besides Norway of course), I was pretty much banking on Radboud for an opportunity abroad. I chose the study because I had been thinking about doing a year of psychology, and then study robotics, so I was basically perfect for me. On top of that, I was leaving to travel for 4 months right as I was applying to universities, so I was in quite a rush. I didn’t really have the time or capability to consider another study, but I’m really happy with where I am now. It’s such a great study, and all the friends I’ve made here are really nice!

- What do you think about the city? Any favourite spots?

Nijmegen is beautiful! I love it so much. I love the fact that it’s small, but it’s still considerably big. My hometown is abouth the same size as Nijmegen, so it pretty much reminds me of home. Stavanger is actually the 4th biggest city in Norway, which I guess is kind of embarrassing considering how small Nijmegen is in Dutch standards. Nijmegen has a lot beautiful parks which I think is very nice. The beach is also a really nice place to hang out. It’s so nice to have a beach close by, even though it’s not connected to the ocean. It’s still something and for that I’m very happy. Nijmegen is also really close to the border of Germany, and Belgium isn’t too far, so travelling from here is pretty convenient.

- What are you planning after your bachelor?

I want to travel again! If I could have a job where I would earn money and travel, but not have to study super boring travel agency stuff first, I would. I wanna move around and see a lot of different places. I will always want to go to somewhere new. However, home will always be close to my heart. I’ll always love home.

- What Dutch words do you know?

Oooohhh. The first word I learned was kijkavond. Because all my friends were like, “I’m going to a kijkavond tonight”, so ofc. I had to know that word to understand what all the fuss was about. Then, I learnt the word “kut”. After that, for a while I would just randomly say “kijkavond kut” to my friends during lectures. But now, I also know numbers and some other words. Norwegian is also very similar to Dutch in many ways, so reading and sometimes listening to it is not that difficult. I want to take Dutch classes to learn more, but I don’t really have money to spend at the moment. Oh well, in time. Maybe next year.

OH! OH! I have a little story:
So, even though the two languages are similar, there are also a lot of differences as well. For example, the word ‘jij’ in Dutch means you, but the pronunciation of ‘jij’ is the same as for the Norwegian word ‘jeg’, which means I. This is sometimes very confusing. Franci and I were playing something at the Sportscenter, and this one guy told Franci ‘you played well’ in Dutch, and Franci was like ‘jij en’, so I got super confused, because I thought Franci also just complimented herself. Then the realization came and I was like ohhhh. Funny how these little differences/ similarities throw me off sometimes.
Another time I got confused (not sure if someone finds this inappropriate) was when I was seeing the word ‘mensen’ everywhere. On posters, on signs, etc. It was weird for me because the word ‘mensen’ means a girl’s period in Norwegian, so I just figured that Dutch people are just very open about these things. I finally had to ask someone, and I learnt that ‘mensen’ meant people. Everything made sense to me from that point.

Pronunciation of Dutch words is also really hard. Sarah was trying to teach me to say “Gall en Gall” properly, but I failed every time at saying the ‘g’. People always say that I have to have more ‘g’-sound, but I’m pretty sure that the Dutch ‘g’ does not exist in any other language. I make it sound like Khall and Khall. In the next few years though, I hope to improve my Dutch. Would be cool to be able to speak a language after living in the country for three years.

- Are you active outside your studies? Any hobbies?

I think I’m doing quite a lot of stuff outside of my studies. When I went to school, before I started uni, I was not really doing anything school-wise, so I am doing my best to not do that again, but I also make sure that I do social stuff too, I would go crazy if I didn’t. Most of the time I go to the sports center and make dinner with friends. Previously I did a lot of dancing (hip hop), football, and other sports, so it’s fun to try out the different courses they have at the sports centre. Right now I’m doing hockey and rock climbing. I would like to do even more social stuff though. It’s always fun to meet new people.

- Based on what you’ve been telling me, you seem like you’re really into travelling. Anything you want to say regarding this?

Travelling is also definitely one of my hobbies. My dad is actually from Guatemala, so my family travels a lot because of that. I also don’t have any other family that lives in my hometown, so we usually end up having a family gathering somewhere like Portugal or Spain. It’s a little bit more fun than going to Oslo all the time. I guess the habit of always moving around has sort of made me addicted to it, and also travelling is so much fun!

- I came to know you’ve been to South America. Anything you want to say about that?

It was amazing. My childhood friend and I travelled for a little bit more than 4 months, and I’m proud to say that we planned the entire trip ourselves. First we were volunteering in the mainlands of Ecuador. Then, we went to the Galapagos islands, one of the most amazing places I’ve ever been. After that, we went to Bolivia, Brazil, and Panama (and a day in Peru -  but that doesn’t really count). Because of my dad, I’ve been a few times to Central America, but this was my first time in South America, so that was a lot of fun. Always exciting to go new places. We did so many things, and we also spent a lot of money, but it was all worth it! I have so much to say but I can’t possibly fit it all in this interview. I recommend doing something like this to everyone! It sounds cliché, but you learn a lot about yourself, people in general, and also the people or person you travel with. Definitely the best decision I’ve made in life so far. It was also very nice to be ‘giving’ so to say when I was volunteering. I learnt a lot of Spanish, more than I ever learned in Spanish class in school, and also some Portuguese.

- Any last things you want to share: maybe some future exploring plans or any resolutions?

Hmmm that’s difficult… I really like the fact that most people in AI are on the same wavelength when it comes to how they are as a person, which makes approaching people very easy. Like no one thinks they’re better or think highly of themselves.  I’m so happy with that. I also love CognAC and all the activities we go to! :D
OH! Fun fact: Norway is actually not very cold. People seem to think it’s always freezing up there.