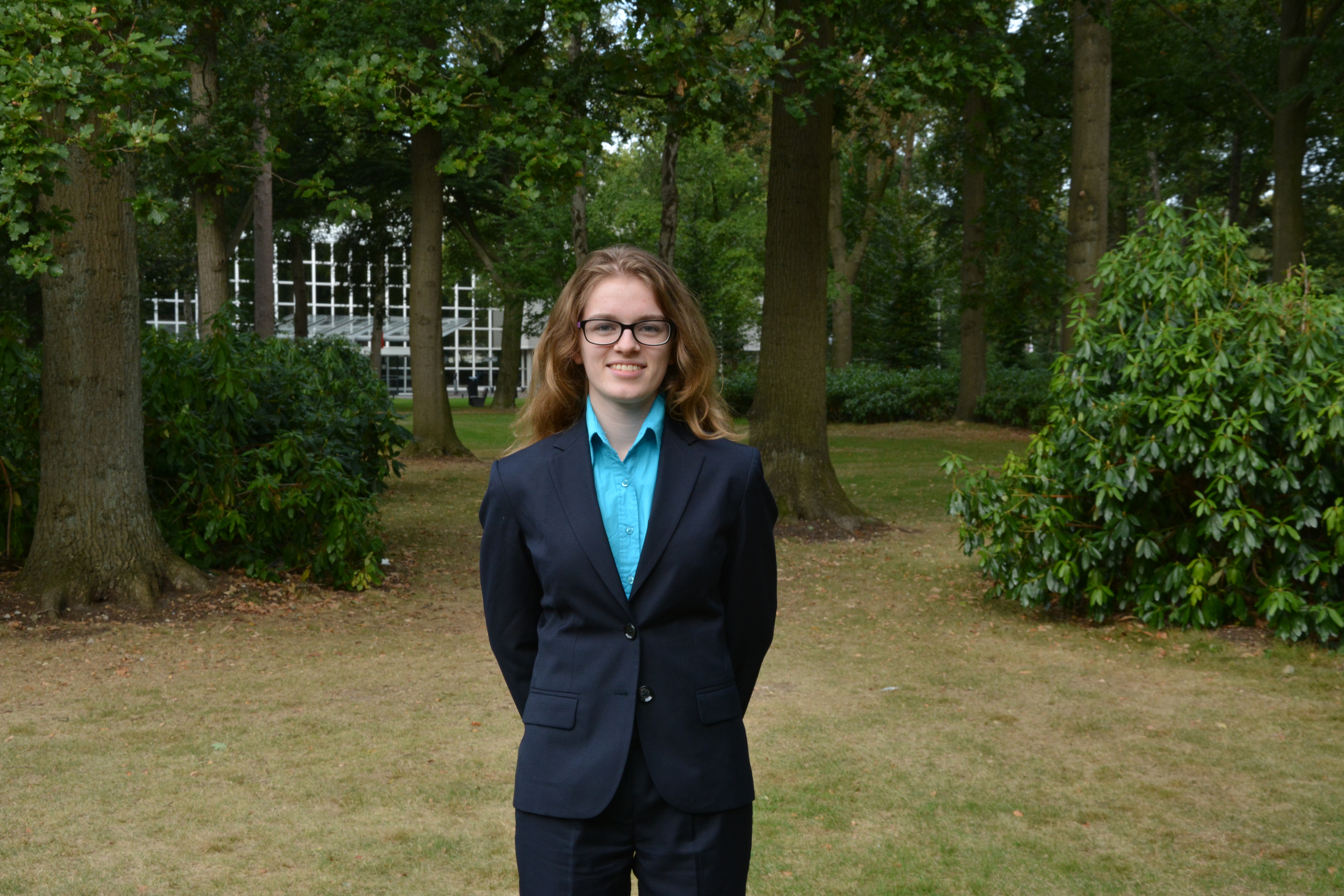 Tell me something about you:

Hello, I am Loes. I’m 19 years old and a second year student of AI. I’m from Heerlen, Limburg which you might have guessed from my accent. I’ve got one twin sister and an older brother.

So if I am not mistaken you are the youngest of this year’s board. Is there a special reason that you already joined the board year in your second, rather than your third year?

Well last year I already thought about a board year but I did want to do it in my third year. On the day that the interviews for the board-application took place, this however changed a bit. I got a message from Djamari or Esra (I cannot remember who it was) asking whether I wanted to join the board this year. I answered “rather not” but when she explained that there weren’t enough applicants, I decided to take a look at the board interviews anyways.

That must have been quite overwhelming for you?

Yes it was quite weird, I came completely unprepared to university for a kind of big interview. Luckily the application committee gave me one weekend to think about whether I really wanted the position in the board. After that weekend I agreed that I wanted to join the board and the application committee agreed that I was a suitable candidate. And boom, I became a board member.

So why did you originally wanted to wait for another year until you wanted to join the board?

Originally I wanted to get my propaedeutic diploma before I would join the board, since I did not passed FP (Functional Programming) yet. Furthermore I wanted to become a bit more active within CognAC and join some committees before I would apply for a board position.

So last year you haven’t been really active in our study association?

In the first semester of the first year I haven’t been an active member of Cognac at all. I was a member of Phocas, where I was quite active. In the second semester things kind of switched: I joined 3 committees of Cognac and spent less of my time at Phocas.

Which committees did you join?

The Weekend Committee, the Sweden Committee and the Real Life Monopoly Committee.

And how about Phocas right now? Are you still a member there?

No, I am not with Phocas anymore. I kind of foresaw that I would be too busy with my board year to do much within Phocas. I don’t think that I will be joining Phocas next year again. I mean it was a lot of fun, but I do not really feel the need to go back.

Okay, back to your position in the board. Did you really choose to become Secretary or were you just given that position after your surprise interview?

So what do you have to do as a Secretary?

I take care of the incoming mail of Cognac. Furthermore I am responsible for the weekly mail and the facebook promotion for Cognac activities. .. Oh and I make the minutes of all the board meetings!

Being a secretary enables me to have a nice and clear overview over all the important things during a meeting. I like that. Next to that it is interesting to see all the mails that are sent to CognAC.

So do you have any favourite task?

No not really. Everything is interesting.

But do you sometimes have to do a task that you do not like to do at all?

Not really… Oh actually I do. Minuting endless discussions at General Member Meetings is really tiring.

And are there also more general things about your board year that you do not like?

I think that everyone said it during the “Interview with the Board”, but I will just repeat it: At some point you are just so busy with everything, that you kind of lose control. For me that meant that I started to neglect my study and that I failed more courses than I planned. But still, I don’t have any regrets of doing this board year. Despite the business it is still fun!

Is there something you like to tell from your board-experience? Maybe something funny from a CoBo or Beta-Bazen-weekend?

Well I could tell you something about the Beta-Bazen-weekend but I will not tell any names. At that weekend there was this person, without any driver’s license and let’s just say that he was slightly tipsy (tipsy person #1). Another person brought him to a field where he could practice driving for a bit. While everyone was looking, tipsy person #1 started driving, for not more than 1 metre. Before we knew it the air was filled with smoke, and both of them came out of the car looking shocked. No one knows how, but tipsy person #1 managed to overheat the car’s engine while driving for maybe 5 seconds.

So besides not driving when you’re drunk… What did you learn from your year in CognAC’s board?

For me it was quite striking to learn how professional a study association can be. On organizational matters I would say that CognAC isn’t less professional than any big company.

How much time do you have to spend in an average week on your board tasks?

It really depends, but I think that I spend about 18 hours on board tasks in an average week. Sometimes it is less busy, sometimes a bit more. Especially when I have to make minutes of a General Members Meeting I have to work longer than that, since the deadline for those minutes is usually quite strict.

Another thing that I learned by the way is that I am not very good with combining my studies with another big job such as a board year. With all the effort I put into the board-tasks I sometimes literally forgot to study, which resulted in bad grades.

And how about your future career? How much more years will you spend on your bachelor? And do you have any big plans beside studying?

I think/hope, that I will have to study for two more years until I graduate. In my last year I’d like to go abroad, I don’t have any idea though on where I’d like to go. I don’t really know what I will do after my Bachelor’s. I’m not sure whether I will start working or I want to do a Master’s first… I don’t think that I want to become an academic but that’s like the only thing I know.

Is there some last thing that you would like to say, before the interview ends?

Klaatu barada nikto. (After puzzling look of me) You can google its meaning if you want to ☺