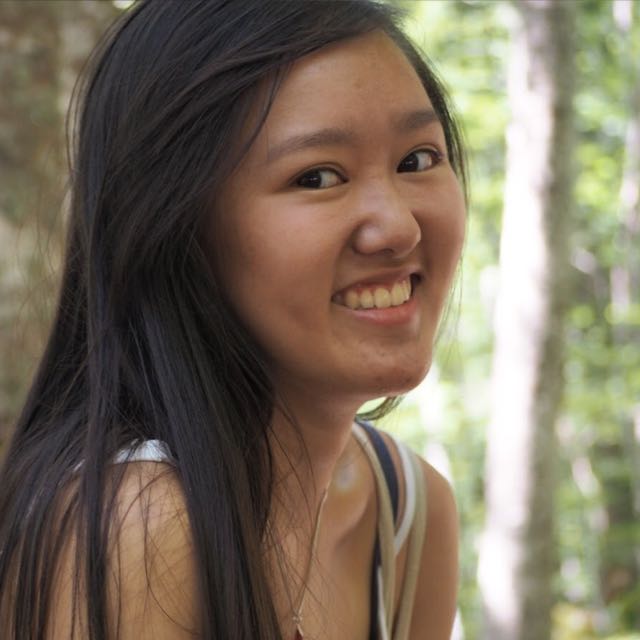 First of all, can you tell us something about yourself?

My name is Honghong, I am 19 years old. I’m a second year AI student. What else can I tell? I have two older sisters, who both study as well. They both follow a master in bio-medical fields. One in Utrecht and one in Eindhoven.

And then you thought, let’s do something completely different?

Well, I took a look at their studies, but no, I don’t think that’s for me. I took a look at many studies actually. I wanted to keep my options open. In the end I chose to study Artificial Intelligence in Nijmegen, but I also looked at the AI programme in Amsterdam. I signed up for the student-for-a-day programmes. Amsterdam never replied. In Nijmegen I followed Erno for a day. Even though he told me I was boring, I could tell that the atmosphere was good here. And Erno has since admitted he was wrong, so it all worked out in the end.

Glad to hear. Is there anything else you can tell about yourself? Do you have any pets for example?

I don’t actually. We used to have fishes back in Gendt, but sadly those died. ☹

Gendt, is that where you’re from?

Honghong confirms this and remarks that Gendt is spelled with both a ‘d’ and a ‘t’.

It’s a small town about 20 minutes from here (by car). It’s not that far, so I was already quite familiar with the area. We visited Nijmegen many times before.

But you don’t live there anymore, right? You’ve been living in the Heidebloem-flat for half a year/three quarters of a year now?

Yes, I’ve been living in the Heidebloemstraat for just about half a year now.

We share a bonding moment over the fact that we live in the same building. We confirm that the Heidebloem-flat is best flat and that the right elevator is the best elevator.

It’s been really good. So nice to live close to the university. I can be there in a breeze. I also really like the fact that I have my own place to sleep. I no longer need to depend on friends for a place to sleep if I want to attend an activity or party. I also have very nice roommates and neighbours. A short while ago some of our neighbours knocked on our door and asked if they could use our microwave to pop some popcorn. All of a sudden we had two people in onesies in our kitchen. They microwaved the popcorn for too long though, so the house smelled of burnt popcorn the entire evening! Never a boring day with neighbours like these.

Do you have any big plans for the future?

Sigh… I really don’t like these questions about the future. I never know what I should answer. In the third year there's a course where you have to present your dream apparently, but I don’t really have one. I’m focussed on passing my courses now. There’s not much room to think further than that. I would like to study abroad for half a year maybe. I heard Sweden is really nice to go, but I’ve always wanted to visit Canada, so maybe I’ll go there. Or go to Australia, somewhere far away. Other than that I don’t really know yet. I haven’t even had the time to think about a master yet. Let alone anything past that.

Which courses do you enjoy most?

Hmmm, I think I’ll have to say mathematics. Mathematics is clear, it’s either correct or incorrect. I really like that. Of course, the hard part has yet to come, so I might regret giving this answer in a few weeks. I also really like datamining. But these are courses of this year. Courses of last year feel so far away already...

We’ve been discussing the study programme for a bit, but of course there’s more in life. For example CognAC. How did you end up at CognAC?

I think Erno mentioned CognAC during the student-for-a-day. And then during the orientation I heard about it again. That’s when I signed up.

I really liked the orientation. It was lots of fun. Back then the groups were a bit smaller still. I was in a group with Ella. I’m still thankful I got to know her, otherwise I might never have become AI* of the month. During the weekend I also got to know the LEEF (Louisa, Elena, Ellen and Francesca). I had a great time with them.

Getting to know people! During the orientation you have a lot of contact with all kinds of people. Especially as an orientation mother. Seven of my kids are now also in my mentor group. Some of my kids left me for Ella though. Those kids sometimes come up to me and jokingly complain that they’ve made the wrong choice. I know the kids in my group do that with Ella as well though.

What did you like better, participating or being a mother?

Participating I think. Don’t get me wrong, both are fun, but as a parent you have more responsibilities. I don’t mind being responsible, but when I participated myself I didn’t have to worry about anything. On the other hand, as a mother, I already knew lots of people. That’s really nice as well.

And after the orientation you thought, let’s get right into committees?

Well, not immediately. But I knew I wanted to do committee work. I joined the committee picnic and learned about which committees there were. I joined the First Year Committee and the Activities Committee. The 1C seemed really fun and consisted almost completely of friends. I decided on joining the AC after discussing it with some of my friends. You don’t want to be the only first year student in the committee after all.

And that’s when the Honghong for Praeses period started?

Oh my god… Yeah. They even turned that into a meme! Some people had photoshopped my face on the Mona Lisa and started a campaign to make me the chair of the 1C. When they started to promote in the first year Whatsapp group I thought “Nooooo…” and when they send that picture…

But now I am the chair of the Activities Committee. So I guess it got me somewhere.

Ah yes, the Activities Committee. Do you have any big plans with the AC?

That’s a secret for now. You’ll have to find out.

What is your favourite CognAC activity?

Pfff, let’s see. I really like the weekend, the parties, the gala. There are so many. I really liked the atmosphere at the weekend though. CognAC people are almost always super nice, so it was a weekend filled with awesome people. I also really liked the games and the fact that we were split in groups. I knew everybody in my group anyways. Yep, it felt like a mini vacation with CognAC people. I’m also really looking forward to going to Budapest this year!

Are there any other things you’re looking forward to?

The weekend of course. I’m also looking forward to the karaoke evening. Last year I couldn’t stay for long, but this year I live on my own. Ella and I already picked a song for a duet. I’m not going to tell which one yet, that’ll stay secret. I also look forward to the Poker tournament. I enjoyed walking around all dressed up last year. Oh and I’m really curious about the CognAC Open Party. There’s just so much. I’m probably forgetting tons of fun activities, so apologies to the committees that I’m forgetting!

Haha, I’m sure they’ll forgive you. Let’s do a traditional question next. If CognAC were to get a pet, what should it be?

I knew this question was coming and I still don’t have an answer! Hmmm, maybe this is a bit cheesy, but Ella made sure I would become an AI*. She compared me to a panda. So maybe a panda? Although I’m not sure it would be smart for CognAC to get a pet. On the other hand, it would be a good change of pace from all our interaction with our computers.

Let’s conclude with some more arbitrary questions. Do you have any strange hobbies?

Not really. I’m kind of basic. I did swim for a long time. Almost 10 years. Even longer if you include the period where we got our diplomas. I’ve spent over half my life in the water.

So you’re quite at home in the water?

I guess you could say so. In the Efteling I was also on the watery side of the rides!

Sure. We went to the Efteling with the AC and OrC. Initially we wanted to go with just the AC, but the OrC was really hyped about joining, so we went together. We had a lot of fun, but it was also kind of awkward at times. You see, we went in onesies. Onesies are real eyecatchers. We were walking at the station and, in order, you would see a giraffe, a dinosaur, a sheep and a unicorn. We got quite a lot of attention. But the onesies were really nice and warm. We even took a picture with Pardientje in our onesies!

Do you have a favourite Disney movie?

Not really. God, I don’t like these favourite questions. There all fun! The one I watched most recently was Moana. It’s really hard to get those songs out of your head.

Would you rather have a pet that would forever be young and small, or be able to breathe under water?

Breathe under water. I’m not sure if I would ever get a pet. Although I don’t really swim anymore. It does seem cool to me what you can see under water. If my pet would stay young forever I could consider getting one, but then again, I’d be fine with hugging a big dog too. No, underwater breathing, definitely.

I would like to travel more. I know, it’s a boring and basic answer. I would also love to ride a balloon at some point in my life. Bungee jumping seems cool as well, but I don’t think I’d have the courage to actually do it.

And then finally, is there someone you would like to give a shout-out?

With this the interview comes to a conclusion. I thank Honghong for her time and effort, both for the interview and everything she does within CognAC.