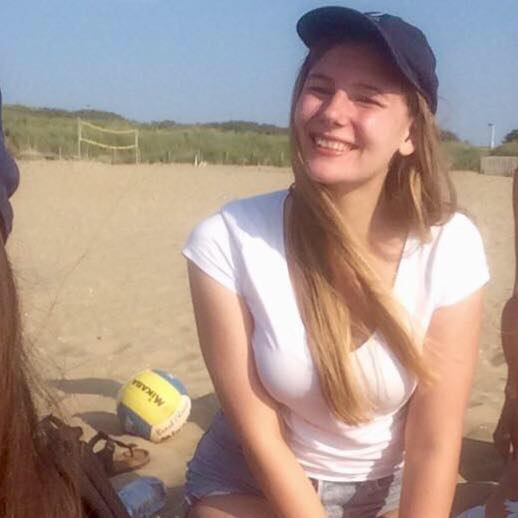 Could you tell us something about yourself?

I’m 19 years old, and I’m from Germany. Actually, I’m from a really small village with only a thousand people, 30 minutes from Frankfurt. I have one sister; she’s 15 now. Oh, and I study AI!!

Is there anything else you can tell about yourself? Do you have any pets for example?

No! Because I’m like the most stereotypical nerdy person with all those allergies and asthma. So I never could have a pet. But there’s one dog that I’m not allergic to: Anouk’s dog. It’s an awesome dog! A Labrador I think? (Lovely photo of Anouk's dog: https://ibb.co/dqErS6)

Why did you decide to study AI in the Netherlands?

I was finished with school when I was really young, I was still 17. I wanted to go abroad and do a social year, but I was too young for that! I was too young for everything except studying…  :( Then I went to this educational fair and there was a Radboud stand. I randomly went there, saw something about AI and I was like “yeah that sounds cool, I’m just gonna do that”. So, I just signed up for it and didn’t even sign up for any other university. And it worked out, so that’s nice!

Are you still happy with your decision to come to Nijmegen?

I’m really, really happy, it’s so awesome here. I mostly like the people! Especially since my old city was the second oldest city, not because of old buildings but because of the people, about 90% of the people that live there are old haha. So it’s nice to have some young people around!

Would you like to say anything about where you live now?

I would love to say that I live in Nijmegen, but it on my post code it says Ubbergen and Berg & Dal... It’s really close to the border of Nijmegen though! Only like two steps! So I just say I live in Nijmegen. I live with ten roommates, and we gave an awesome house party!

Moving on to some more study related questions, what is your favorite subject?

This year I really, really like Mathematics 2, because I hate the teacher! He said that we can’t do both Math 2 and be a programming TA, since classes are at the same time. He said “you can’t do that! You’ll fail!” and now I actually really like the course and I want to do well. He said that it would be impossible, but now I’m going to show him that I can actually do both.

My all-time favorite would be Functional Programming. WHAT?! Yeah I don’t like clean but I really liked the course. I know, people hate it but I think it’s really, really nice. You know that there’s a Functional Programming 2 right? I know, I was thinking about it! Though, I heard that the computer science course was really hard so I’m not sure yet…

Any highlights you are especially proud of during your study?

At the tequila borrel we managed to take 5 shots really fast, I we actually won a sombrero. Something I’m very proud of!

Do you have any big plans for the future? Master?

I’m not sure yet actually… I just know that I definitely don’t want to do CNS! I want to do something with a lot of programming.

Moving on to CognAC, what committees have you been in/are you in?

And maybe a harder one, what is your favorite committee?

Hmm, last year I loved the AC, and at the moment I love the Party&Co, but the OrC even more. Why is that? Because with the OrC I feel like we’re actually doing something. It’s so cool specially when you’re the head of something you really know everything and get to manage everything and I really like that! So are you implying that the Party&Co doesn’t do anything haha? Haha it does, but we don’t do too much, just the rainbow party now. Our color is going to be purple! Which is maybe not the best… But I guess if you wear blue jeans with a red shirt is on average purple!

If CognAC would get a pet, what would it be?

This is a hard one, because I’m allergic to cats and dogs! I do love blue whales! Hoever I didn’t think about the logistics yet… It’s too big for the Board Room. But at least I’m not allergic! That’s a win! Also, I have a great name: Deep Blue! Perfect AI!

What are your hobbies?

That’s hard... I used to have hobbies, but here studying and CognAC is already so much, I guess that CognAC is my hobby! Also I sometimes go to the gym and I did a Jiu Jitsu course. I did this on the sports day during the Orientation Week and I thought it was nice!

What kind of music do you listen to?

I really like old rock music and punk rock. My favorite artist would be the rolling stones. Unfortunately I didn’t go to their concert since it was like 200 something euros. I thought I’d better save this money for the TraC trip to Budapest.

What is your favorite Disney movie?

My favorite movie is Big Hero 6! I love Baymax! Again AI related, I’m such a great AI student, I was born for this.

Who is your favorite Disney princess?

Every time I’m drunk I make toast with ketchup. It’s really disgusting. And then I lay on the ground. I think it’s good when I’m drunk, but it’s probably disgusting. I never tried it when I’m sober though…

I don’t really have things on my bucket list, but I do want to travel a lot! I’m actually going to Norway this summer! Are you visiting Isabel?  Yeah, Isabel is coming with us! We’ll probably visit her as well.

Also, I want to shave all my hair once, because I really want to know how my head feels when it’s bald. You know there was a shave your head for the RAGweek drink for this not too long ago right? I know, but I just don’t have the balls to actually do it. But it’s something I think would be nice to do. And also, you can just touch a random bald person right? That’ll be the same thing? Haha yeah,  but it’s also that you don’t have to wash your hair the whole time, and that your hair is in the way! It’s so easy, you can just wake up and go!

What did you ask for Christmas?

I’m actually going skiing with my friends this year, and never went skiing before! So from my parents I will get skiing pants and hat.

Oh that’s so much pressure, this has to be good… Hmm.. No not really… Only a shout out to all of my committees! I love them! They’re awesome!