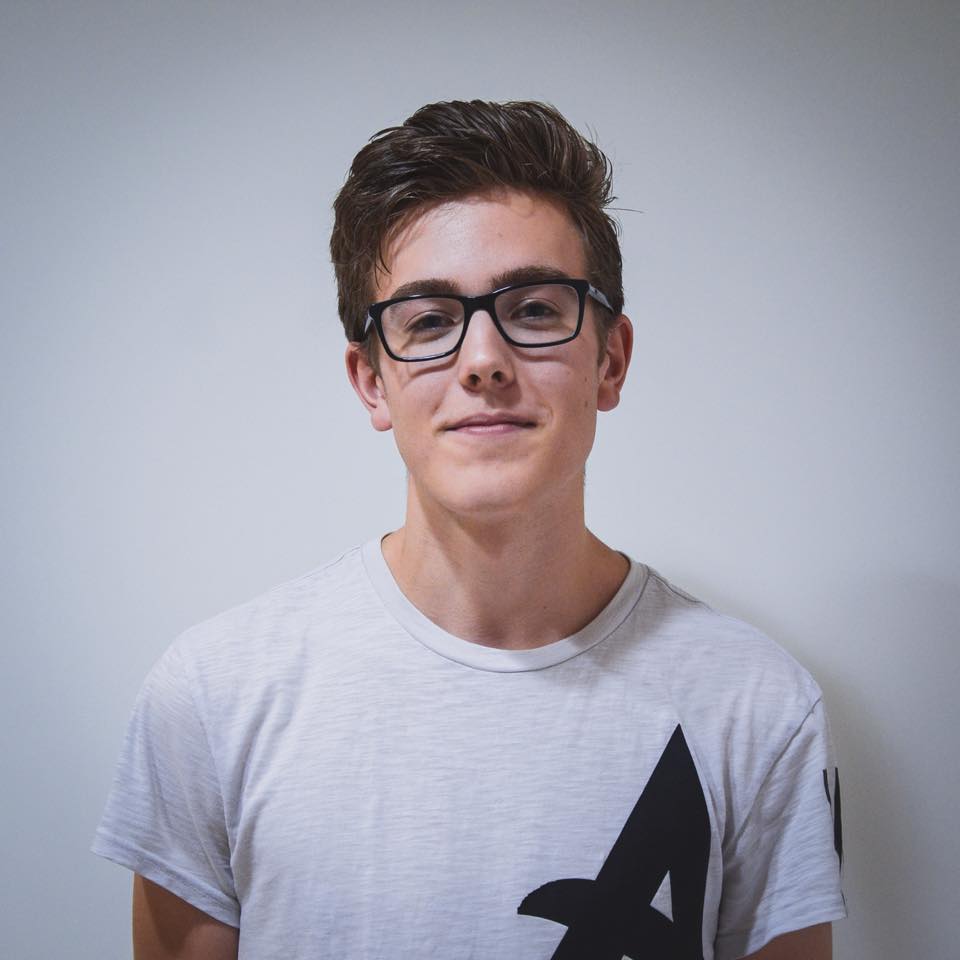 It was only a week ago that Jorrie interviewed me as a board member, however, now it is up TO ME! I want to know all the dirty secrets he has and everything this AI star  is keeping from us. Teach me senpai.

(of course, the interview started with me eating and again us talking about the size of Jorrit’s hands).

Could you tell us something about yourself?

I am Jorrit Geels. 18 years old. I’m from Den Bosch but people usually think I’m from Amsterdam because my accent is kind of Amsterdam-ish. I have a sister called Wieke who is friends with Fabian (s/o Faabs). I have a cat Sammy. He’s my lil’ bro, he’s kind of the brother I always wanted. We have a very serious relationship.

Oh, and also a sweet daddy and mommy.

So you are living in Nijmegen?

Yeah, I live in the centre, above the Next Level (juh weet tog). That is in what they call ‘the Gazastrook’. I have a very nice patio (s/o escobakterrantus 2017-18).

And are you still happy in Nijmegen?

Yes it’s a great place. I studied in Eindhoven last year – not doing that again – but Nimma is the place I adore. I haven’t been this happy ever.

Are there things in Nijmegen that make you less happy?

Minions. But only in Nijmegen.

No really, no one here gets carnaval, only the real Brabo’s.

Naturally, me as a randstadder, started the discussion whether it is carnaVAL or CARnaval (klemtoon dingen). We couldn’t come to a conclusion, however, Jorrit was wrong.

Moving on to some more study related Questions, why AI?

I was in the 6th grade and I thought: hey, I’m creative; hey, I enjoy group projects.

(you can hear me eating on the recording lol)

With architectural engineering (which I studied in Eindhoven) I thought this is what I would do: be creative in a team and create cool stuff / design your own vision. It turned out to be crap. So I did a study choice test there paid by the university and that told me to become a park ranger. WUT?!

So my sister told me about AI at Radboud because she knew people here. I did a Tasterday with Honghong (s/o Djongdjong) which was nice. I quite liked the study and basically AI was the best way to pass the time with cool people and future guarantees until I can get into film because that is what I really love.

So if AI is a way to pass the time, do you have a favourite subject?

First I didn’t really like Formal Reasoning (Jorrit pronounces this as ré-so-ning), however, now I quite enjoy it. I don’t think I really have a favourite subject. I liked Cognitive Psychology, but I think I just don’t find anything really boring. Everything is okay.

(here we had a small dabbing break)

Are there any things you are already proud of which are study related?

Jorrit didn’t know anything so we made some horse jokes and then he finally thought of something.

On the first day of APS we did a kahoot. I was the first online and my name was ‘knuffelrupsje’. Everyone started talking about ‘knuffelrupsje’ and I felt amazing. I really made it at that point.

Moving on to CognAC, when did you become active in CognAC?

Day one motherfuckers. No but really, on the first day we got the forms so naturally I convinced all my friends to become a member as well. Then the committee picnic came and again I dragged all my friends with me. I became a member of the MC (Chair) and of the 1CA (Co-Chair of the 1MCA). I dragged everyone into the 1CA as well except for Sigur, however, I promised I would get Sigur in the OrC (now you have to ;) ).

At this point, I wanted to show Jorrit the bruise on my knee and said that I would need to take of my pants. I was in doubt, so Jorrit said that he would do it too. Before I could stop him, he was in his underwear in the middle of the board room in front of the windows. If this wasn’t weird enough, Mark Rietveld walked in on me behind the door telling Jorrit to pull up his pants and Jorrit saying I should take mine of too. It was very interesting. After this small intermezzo of Mark not knowing what was going on, we continued as if all was normal.

Were you also there when my phone rang TWICE during a CognAC talk?

YES hahah! I already made like 10 jokes about that, you know that. I wanted to call you a third time but I didn’t know you then.

Side story: Jorrit and I met on the first CognAC Evening over our ‘love’ (read hate) for horses. We sent each other horse pictures and memes and then we just became besties.

You are in the MC and 1CA, but what is your favourite committee?

The TraC! No um the OrC because they choose me. But no for real, the 1CA. Every meeting is just funny and cool. I actually did a cat walk once over the tables whilst there was a ‘tasterkiddo’ haha. We have a good seccie, a good chair, and a good Aline. Just awesome people that make it awesome. We are actually also going to organise an auction with some of the 1CA’ers!

So which committees are still on your to-do list?

AC seems nice. DAtA and OrC seem lit. WkC would be cool. Oh, by the way, the PaparaC logo is wrong on the site! I will e-mail Karcie about this. TraC is awesome. Lustrum Committee hype. I’m planning on joining the MoC this year. Lastly, the PC and Party&Co. A long list to go whoops. Oh and the board committee sounds really fun (wink wink).

Talking about the board: with whom of the board would you want to have an intimate dinner with?

An intimate dinner? So with like two of us, candle light? Some hand touching, deep eye contact? Depends. Lennart is just the intimate master, we have that bromance with those close up snapchats. So if you would ‘just’ have dinner I would say you (Lea), however, if you are saying it is really intimate, I have to say Lennart because he’s my bro. My intimate snapmeister.

Jorrit is shaking no. I am hurt. He starts shaking yes very intensely.

Honestly, CognAC has made me feel welcome from the first moment on and that makes me feel like I’m home. So yes, you will always have a place in my heart.

Side note: Jorrit spends so much time in the board room because he feels home here, that some boards actually thought he was a board members lmfao.

Other subjects: music and hobbies.

I listen quite a bit to Dutch rap, actually all rappers are from Amsterdam; Lil Kleine, The opposites and Donnie, to name a few. I also listen a lot to Drake. Don’t think I only listen to rap: I enjoy super calm music, trap and even some soul quite a bit as well. For hobbies; I recently got myself a Switch on which I play Mario!

If you want wake up tomorrow with one new quality, what would it be?

Being able to say no.

I asked Jorrit to say no. He said yes. That was the whole joke since he can only do it tomorrow morning muahaha!

But honestly, my life would be better if I learned to say no to some things.

That new peanut butter they have at the Albert Heijn. I eat that with so much love. Sigur is also my guilty pleasure. And Lea too (wink wink).

Most awkward moment of your live?

I once farted during gymnastics. On a scale from 1 to ‘I don’t want to live anymore’ it was about a 6,2. Oh, and Lea video called me once during a lecture and I turned my sound off but apparently that didn’t work so everyone heard her. That was quite awkward.

From these examples it became clear that Lea lives a far more awkward life but Jorrit accepts her the way she is.

What is too serious to joke about?

Finish this sentence: If CognAC would be able to ……. I would definitely ……. .

If CognAC would be able to attend a massive pub crawl I would definitely chair it with Lotte. With like 60 people. Like the whole of Nijmegen, all together. AT ONCE.

OH NO OH NO!! If CognAC would be able to sleep on the campus I would definitely organise it! F*ck the pub crawl.

Are we already done? I’m too boring for this interview.

You are not boring pannenkoek!

Can you ask me what I am going to do in the future?

What are you going to do in the future?

I’m going to do laundry tonight and probably do the dishes.

(I prepared this question with Sigur so I could seem funny and I was expecting it.)

I would also like to do the dishes on time if I could choose a skill to wake up with tomorrow.

S/o 1MCA, s/o 27, s/o Lea (extra I don’t care), s/o Sammy my cat, s/o Wieke Geels who got me on this study, s/o team Aandacht, s/o MC, s/o my photoshop workshop on 8th of January in TvA8, oh and s/o to the Valentines auction on 14th of February be there or be square, s/o Project XXL Dierentuin clan, s/o Yung Palmtree, s/o Bram’s Angels, s/o to best APS mentor Ella and Pigachu.

We end the interview with a very nice hug and me assuring Jorrit that the interview was really not boring. Hope you enjoyed it and now know how this senpai was created.