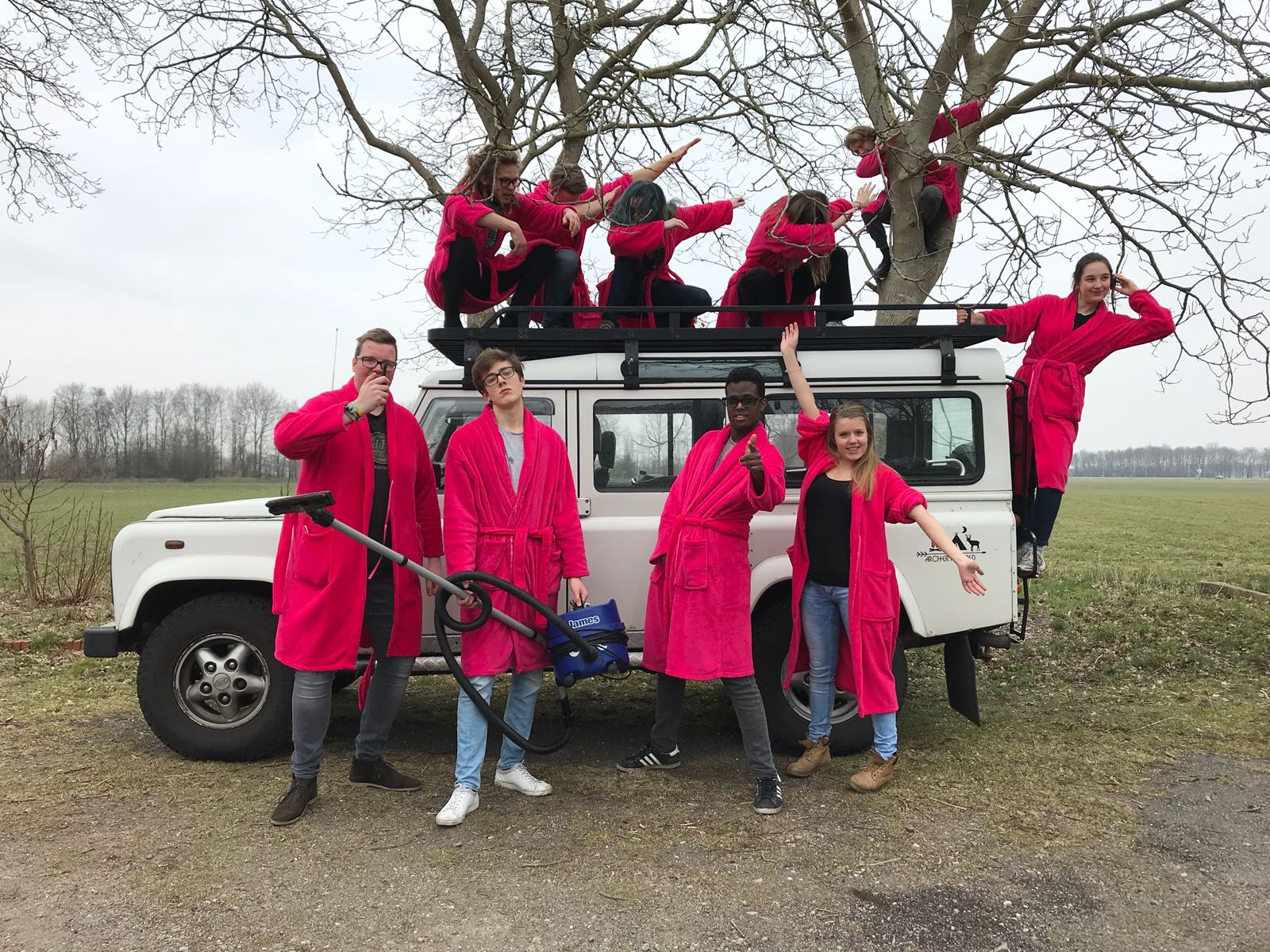 Last weekend was one of CognAC’s biggest yearly activities: the CognAC weekend 2018. Under the motto “#BondingExperience”, around 60 people explored the flatlands of the very 'densely' populated Dwingeloo. Even the bus driver had trouble reaching it…..

We were supposed to meet at three, but with some trouble we managed to get everyone on the bus, almost in time. The bus driver was having a very bad day, which resulted in him missing an exit but still taking it, ignoring safety rules. Missing the junction railing by less than a meter, and then being blamed for making noise, we silently reached our destination: de Hoge Haer. As a committee member, it was a very busy weekend, but so so so much fun.

The first day started a bit laid-back, first the participants played some games, and then had dinner; on the first day we had wraps. Then Loes Habermehl hosted the first activity of the weekend, the Booze Bingo. One of the more chaotic activities of the weekend, but certainly very fun, both for the committee and the participants. One of the few highlights being the broek-uit-op-je-hoofd-Karaoke songs for false bingo, including a free BoyCo performance. The night ended in a campfire, and in a lot of muse(ç)um tours, hosted by someone whose artistic side certainly gained more attention this weekend; Sanne, our current Chief of Education.

On Saturday I got to wake everyone up at 10, which was for me one of the highlights as well. After having breakfast, we did some bonding games around the building, which of course had to escalate into something far beyond expectations: the competitiveness of the participants resulted towards a very surprising outcome from time to time….
The participants walked in a bigger circle around the building during the next activity, and again had to bond more to get better results; some of these activities were climbing through a spiderweb, blindfolded football and the classic 30 seconds.

When the participants got back, they could grab some snacks and a beer, and chill outside for a bit. At six we had the Spaghetti Bolognese, which was not very surprising because the delicious smell could be sensed throughout the entire building already, but nonetheless everyone enjoyed it a lot, just like the Bonte Avond we hosted afterwards. This also raised people’s creative side, we had a Speakturn by the Leonardo benefactors about pans, a play depicting a normal morning with the board, and a Talentshow hosted by Maarten. But above all, we had a very touching play by Ella and Niels, with Shrek as the main theme, and word. It was all ogre. They triggered all the judging factors to the max; the no-budget factor, the “no clue what’s going on and I like it”-factor, and the #Bonding-Factor.

After this, it was finally time for the cantus. Our praesidium remained a secret up until the moment the doors opened and they walked in; our senior was the charming Berend, our punator was the surprisingly scary Ylja, and our procantor was the lovely Jet, the chair of our last lustrum board. The cantus went very well, everyone enjoyed themselves and a lot of nice stories were told.

After the cantus, the WkC planning mentioned “Campfire/Escalation” , but the way the last word was interpreted, was again far beyond expectations. At some point, nobody was wearing their own clothes anymore; boys wearing ladies’ shorts and shirts, and girls wearing oversized shirts and sweaters. Nobody knew what was going on but everyone enjoyed themselves. It was a big sing-along party until the early hours, and even earlier than expected: on 2 AM the clock turned into 3 AM.

After again a short night for some people, we had breakfast at 11:00, did some dished and then mainly cleaned the place up. Because the busdriver overslept due to the time-changes, we had some extra free time outside to play some games: using some trash we got a lot of creative games going on again, before the bus arrived. This time we could actually talk in the bus, which is always a nice extra, and we safely arrived in the city of Nijmegen.

What have we learnt this weekend?
1 No matter what size your pants/pans/shirt/bathrobe/shoes, they always fit, if you want.
2 Spare time makes people max out their creativity skill
3 Nobody used the boomboom room
4 Pans are useful for everything.
5 The Albert Heijn in Dwingeloo surely knows how to #Bond with their customers… </sarcasm>
6 Clothing lines should not be done drunk to prevent more people getting naked.

We loved it! Thanks so much for joining.