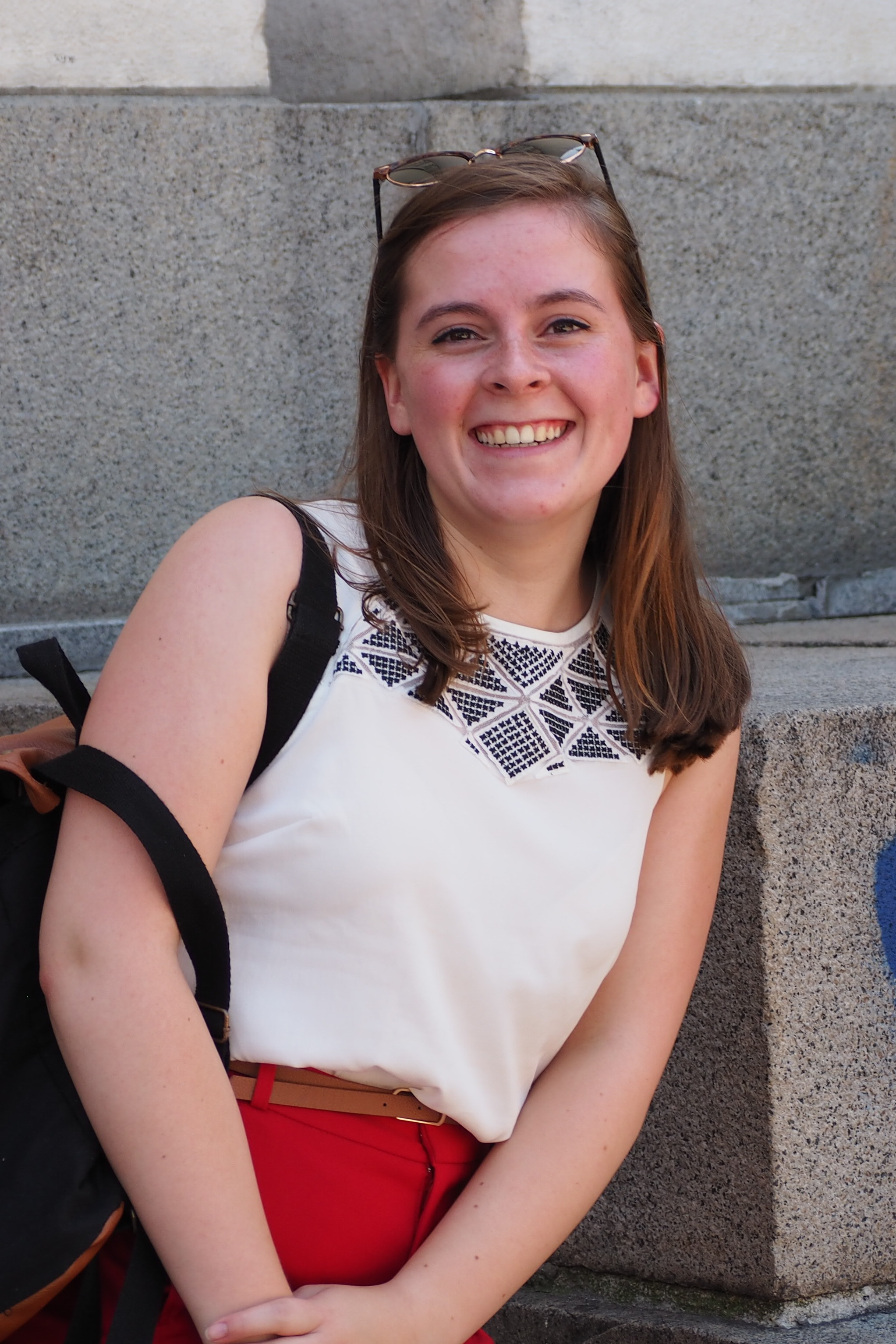 As my first entry for the CogBlog I had the honor to interview Karcie, our lovely Chief of Internal Affairs. She is also my ex-roommate, so this gave me a chance to figure out how much she missed me...

Hi, I am Karcie. I am twenty years old and I come from Brabant. I live in a small town that nobody knows except for Loes. Go Asten city! I play volleyball and I row - well I currently don’t row but I am going to row in the summer again.

You already went through a lot of my questions now ha ha. Can you tell me something about your brother and sisters?

And what do your parents do?

I enthusiastically exclaim their names, “Nelly and Willy”, because of their seriously epic name combo

My mom is a leerplichtambtenaar, you have to translate that one (I did, it’s “school attendance officer”), and my dad is setting up a project, I don’t know what it is for yet.

Do they miss me?

I actually only met them once but I am secretly hoping the Nelly, Willy & Elly could be a thing.

My parents? Yes they do very much, every day they talk about you.

Why did you choose to study Artificial Intelligence?

I was looking at studies and then everything seemed boring to me. AI was the only one of which I thought, o this could be nice. Gijs studied a year up from me in high-school and he was doing AI, so I did a Taster day with him and then I liked it, so I came here.

And now you’re the Chief of Internal Affairs, WHAT DOES THAT MEAN?

I have all the committees under my guard, which means I have to make sure that everything functions and if they need help or have to questions I help them. Besides that I have to do the administrative work of updating the committees on the website and making sure all the aliases are complete and nobody’s missing from it. Also I read a lot of mails!

Why did you decide to become the Chief of Internal Affairs?

Well, I wanted to do a board year. I knew that before I started studying. After that, I thought Chief of Internal Affairs was the most fun position because you get to talk to a lot of CognAC members. I just really liked the position.

What are the best parts of your position?

And how is it as the youngest board member?

Well, they always tease me. Especially Sanne! They always say we have a generation gap even though Niels is literally like three or four months older than me. And then I always call Sanne old. But I do feel like they take me seriously.

You already told us some of your hobbies, but how do you combine them with your board year?

I just do it. I don’t like to sit still. I’m not a person who can sit on their couch for seven evenings of the week. I have been playing volleyball since I was seven, but I didn’t play for the first half year I studied here and I really missed it. So I really make time for volleyball. As for the rowing, I am currently not rowing because it was just too much. But sometimes I do go to Phocas for the parties on Thursdays! I just try to do a lot of everything.

For people who want to become Chief of Internal Affairs next year, do you have any tips?

They always say “Have lots of committee experience”, but I had done only three committees and that is not lots of committee experience. Just look very good at what the chairs of committees do. They have to keep the overview of the committee and that’s actually what you are going to be doing for all committees as Chief of Internal Affairs. Also try to see what the committees do and think of how you would manage them. See how you would talk to them and what you think would be nice if they just do in general. You can also think about when they should be finished with something, so you can keep that in mind for next year.

What committees did you do?

I was in the 1C first and then after a half year I joined the DAtA. One evening I was actually hanging out in the TK and there were a lot of people and they said “Hey were going to eat at the Gerecht, do you want to come with us?” And then apparently I was eating with the Weekend Committee and they we were eating and talking and they said “hey do you actually want to join the Weekend Committee?” And I said “o well yeah sure”. Then we texted Djamari and she was like “o yeah sure”. So then I randomly had my first Weekend Committee meeting and I was part of the committee so that was cool.

Another really important question: which one is your favorite Shrek movie?

I think it’s going to be the fou….. that’s really difficult.  Because I like the baby Shreks but I also like the baby dragon/donkeys. They are really cute. No, I actually think you can’t choose between Shrek movies.

This was actually a trick question. Karcie passed.

Do you have any tips for the first-years?

In the first-year you dive into the deep dark university life. I think it’s kind of a shock of how busy it is, but you really have to keep up and get used to being busy. We notice in the second year that we also have so many deadlines and that’s just the way it is. And it’s hard. Just try to keep up! And don’t be too hard on yourself if that doesn’t work. You’re in university, you’re in the top 2 percent.

In the summer I like Festini pear icecream. A lot. But I am also a big fan of nasi bal (IMPORTANT NOTE: Karcie actually pronounces this weirdly: nazzi). It’s really stupid because you have nasi bal and nasi schijf and everywhere in Nijmegen, except for two places, they sell the nasi schijf but those are way more spicy and their nasi tastes less good. So every time I ask for a nasi bal and they say we do have a nasi schijf… I’m like no. And in my pretty hometown they sell them everywhere.

Sound good! Where do they sell them in Nijmegen?

They sell them at the snackbar near Niels…

O yeah there!! (sarcastically) can you give Niels’s address??

She says no but proceeds to give me directions.

I will link the address.

Karcie was talking about Cafetaria Ugala 2. The address is Joris Ivensplein 3 in Nijmegen.

But this must be enough for the fans. You don’t want the nasi bal to sell out right?

No, actually if everyone asks for the nasi bal then they might sell them. That’s my dream.

I can’t say that I have favorite song, because I have a song that I like and I play it nonstop for two days.

I miss living with you so much. Usually with your music I got so hyped and I would beg you to put it on again. So how’s the house without me?

No it was better when you were there.

This is why I wanted to do your interview. I just wanted to hear how much you missed me.

I miss you very much. Especially our egg times.

I miss like the mornings after going out. And then talking through everything and gossiping.

Can you tell people that haven’t lived with you something about your home?

I live in an apartment with two other girls. One is from my hometown and one is one of her study friends. They study Educational Sciences. I am not really home a lot, because I spend a lot of time at university at CognAC activities, or at volleyball, or at Phocas, or just anywhere. But I like my house, it’s nice. I like that it’s like a house and not just a room.

Do you know what you want to do for like a master?

I am thinking about it but I am not sure what I will do. I looked at like some more Data Science master, or like another computer science master. But I will also consider the AI master. Especially the Language part of it. Then I will also look at other cities. I love Nijmegen but I also want to see what other cities have to offer. I heard that Utrecht has a really nice gaming master. I just want to explore my options.

Do you plan on studying abroad?

Yes! I want to. I will probably go in the year 2019-2020. I am not sure where to go, because every country seems awesome. But I definitely do want to go.

And how was the Alpaca show?

A few days before the interview, the board went to an Alpaca show together. Naturally I had to get the scoop on this.

How did this happen?

I found this picture online of which goat are you today? You have six goats and it says like the happy goat and the party goat..

That is some really important stuff!

Yes really important stuff. We had it in the boardroom because we thought it was funny and then I yelled six when Jake came in because it was ‘I need a hug’ and then we hugged. It was funny. Then Lea created one with alpacas so it was a which alpaca are you today. And then she found a Facebook event of an alpaca show and she tagged us in it. We were like ha that’s funny. But then Bram said that we could actually go there because it was in his street and we could walk there from his home. And then we were like o cool. Then Lea found online that there were only 25 spots left, and that message was sent a couple days before. She was stressing out and sent them a message like hi I want to reserve six spots and the lady replied hi I’m sorry we’re already fully booked, BUT YOU CAN ALWAYS COME WATCH. So Lea almost reserved six spots for alpaca’s which was funny.

We went to Bram’s family first, we ate cookies and then we got a tour of the house which was nice. And we saw his parents and his sister. Then we went to the alpacas. There were so many and they were so cute! We found one which was like the most photogenic alpaca we ever found. It had like a straw of hay in his teeth, but it made it so funny and he kept looking at the camera!

They were so cute. And actually really really fluffy. The white ones have the less soft fur, but the brown ones are like teddy bears. You just want to hug them all day but they actually don’t like to be hugged… But you can scratch them behind their ears.

Then we’ve reached the end of the interview. SHOUTOUTS!

I am not a shout-out person but I’ll try. I’m gonna do a shout-out to my parents (NELLY and WILLYYYY) because they have cool names and they raised me, and now they love me and support me so that’s nice. A shout-out to the board because we are a bunch of silly people together. A special one to my old roommate (THAT ME). And to Loes. And to Mayo. And Hongie. Now I feel bad because I feel like I have to do more people because otherwise they feel left out. Okay, shout-out to all nice CognAC members for working in the committees and being so nice.

That’s so cheesy but so cute...