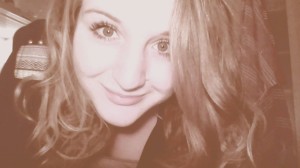 Where do you come from and do you have siblings?

“I come from Geleen, a town in the province Limburg and I have an older brother and an older sister”

Why did you decide to study Artificial Intelligence in Nijmegen?

“I liked psychology, but I wasn’t that much interested in all those could-be-theories, I wanted to do something more technical and since I was a bit of a computer nerd my eye fell on AI.

Nerd? What made you a nerd?

“My brother was a gamer and I used to watch him do that when I was younger and after a while we started to play together and so it started. I was 9 at that time. Next to that my dad always had the newest gadgets so I always got his old stuff, so there were computers everywhere.

Do you still game a lot?

“No, at the moment I’m a series addict”

What was the last series you watched?

“Gossip girl (a bit of a guilty pleasure)”

“Yes, but I also like the more not so girly series.”

Let’s get back to AI, what is you favorite course?

*Hesitates*. “I liked Introduction to formal reasoning (Beweren en Bewijzen). Modern Software Development I like as well, because I like to work together in a group and I also like it that you make something from scratch.”

Is working in groups the reason you liked to be a part of the CognAC board last year?

“Partly, but it is something very different because you’re never done or finished with things when you’re in the board. You just start where the last board ended and after a year you pass it over to the next board. What I like about CognAC though is that we students get big things done. We organize al lot of activities for a lot of people.”

Why did you choose to be an active member of CognAC?

“I liked the way people had contact with each other within the association. I also like to organize activities. I started being an active member by joining the 1C (first year committee)”

Which committees are you in next to the DAtA?

“I am president of the EC (food committee) as well and I am in the LC (25th Anniversary committee) and the WC (Website Committee). The last one I’m in because I like to design things.”

“I’d like to join the RC (travel committee) sometime”

Why did you become a board member last year?

“It seemed like a lot of fun to me, you also learn a lot from it and you can put your talents in it. “

Looking back, what did you learn?

“I learned to be stress proof and to let things go.”

So you’re happy you did the board year?

“Yes! I liked my board a lot. We had a great year together!”

What are you going to do after you finish your bachelor?

“Maybe I’ll go abroad, but I like the AI master here in Nijmegen as well. Anyhow I want to go abroad for a longer period of time before I start working”

Did you already travel a lot before?

“I love traveling, but except for Uganda last year I never went far away. We used to travel a lot when I was little, but I was a bit too young at that time to really enjoy it. My brother and sister where older so they remember more of it.”

What was your most fun vacation ever? Uganda?

“Uganda was beautiful, it was the prettiest, but it wasn’t the most fun. I was traveling with someone I didn’t know that well and it is more fun when you travel with people you know well. I think I liked Los Angeles the most. It was very interesting to see what the American culture is like, because I had a certain view of it because of the movies, but it turned out to be very different. I also liked Greece with my parents and sister. We traveled along with a sailor past all islands close to Greece and Turkey. I usually like nature and cultural vacations more than party vacations. They sound a bit bold, but it is most interesting. I went on a surprise vacation with Erik (Emmie’s boyfriend and fellow CognAC member) last year as well. You just go to the airport and you hear where you are going at the very last moment before you leave.”

“Nowadays I don’t do it that much anymore, but I did judo on a professional level for a long time. It was very nice because I got to train at all sorts of places everyday, but the stress was high. I liked the training weekends the most and I liked winning of course.“

Looking back at it, would you have liked doing it as a job?

“I liked joining tournaments in other countries a lot so that would be a reason to keep doing it, but it doesn’t earn enough to live from it. Also, the dieting is not healthy. You have to loose a lot of weight before you get weighed and then gain as much as possible before the game starts.”

“Interior design! I like to furnish homes and being creative. When I was younger my sister and I used to go to second hand shops, buy some furniture and change it into something really nice.”

What pet would you choose for CognAC?

“Kareltje and Poes (‘Charles and Kitten’)! They were last years CognAC fish, but secretly I find fish a bit boring. I actually don’t like animals that much. Hair everywhere. If you really make me choose I’d choose an otter. I saw them in the zoo one time and they are fun animals. And of course CognACtus! (this years mascot which is a cactus).”