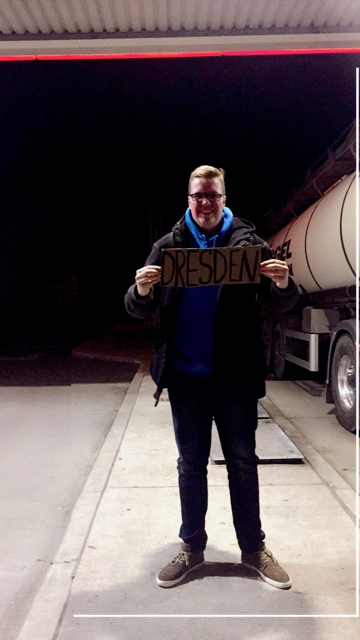 We start of the interview with me telling Lennart, who is also in the Board Room, that there is cassis left from yesterday. We have a small break to drink some cassis and then start the interview for realz.

Sure! My name is Chris. I’m 24 and I’m from a small village in Germany. It’s really close to the border, actually right next to Drenthe basically. I have 3 younger sisters and yeah, that’s about it.

Do you have any hobbies?

Well especially in the summer now I love to make music outside. Just sit outside with friends, play some guitar, sing some songs, have a nice barbecue.

Also, I love traveling! Just going to other countries and meeting new people from different cultures.

So what’s the coolest place you’ve every been?

I’ve been to Bratislava. It’s really cool! I mean, it’s quite a poor city but the people are really friendly. What I liked was that the beer was actually cheaper than soda haha.

At this point I got really excited about the word ‘Bratislava’ and started saying it loudly with an angry voice since I believe that is the only way to really pronunciate the name of the city. I also told a cute story of how I use to call it ‘Gratis lava’ to help me remind the name of the city when I was younger. I’m so full of surprises.

Okay so when you are playing music outside, what kind of music mostly? Do you have like a favorite genre?

When we are playing outside we are basically playing anything and all kinds of songs. But usually I’m the one that is signing (Chris signs very bjoetiful). I’m also getting a harmonica since I really like it during the jamming.

Can you play the guitar?

Nah, not really. I do play an instrument but it’s not really for jamming haha. I play the accordion, it’s hard to take it outside with you - it’s more a solo instrument. But I try to play when I have time. I also actually used to play the tuba, again not made for jamming though haha.

You said you come from a small village in Germany, why then study AI in Nijmegen?

Well I wanted to study Cognitive Science in Germany but in Germany we have a different system. We have a NC (Numerous Clauses) which is a grade you get at the end of high school which will get you into universities. However, you need a very high NC to study Cognitive Science so you have to be very good in high school (which I wasn’t haha) -I’m sure you were Chris! Believe in yourself!-. So I started looking at different studies related to Cognitive Science and then I found AI here in Nijmegen. I actually liked it even more since here we also have the programming parts and with Cognitive Science you don’t have those. So I went to the open day in Nijmegen and instantly fell in love with Nijmegen. I came over the bridge from Arnhem and you see the view of Nijmegen. The university is also really big and nice and modern. I just knew from that moment that I wanted to go here.

And then of course CognAC. How did you become active?

My first contact was of course during the orientation week. At first I didn’t really know what CognAC was and does, since everything is so new. But then, I remember, I saw the talk from the board during the orientation week (s/o to 25th). I didn’t really know what they were doing but I went to the committee market the first year and I got convinced to join the weekend committee.

The weekend committee is kind of your baby right? You went from member to treasurer to chair of the WkC.

I love the Weekend Committee yeah. You put in so much effort and all that work is put into one ‘small’ weekend and then it’s over again. I really love it and you really bond with the committee #bondingexperience.

How did you actually came up with that theme?

Well we had our committee activity and we had a lot of beer and I don’t really know how it happened. Someone just said #bondingexperience and people were like ‘yeah, nice, cool, could be our theme’ and then we just kept coming back to it. At one point in the meetings we were just like ‘this is it, this is our theme’.

So did you join any other committees during your time here?

I’m also in the Food Committee, also since my first year. And of course I was in the First Years Committee (LITTTT s/o 2015-2016 1C). This year I also joined the InC (International Committee) and I’m very excited about it.

I was thinking about joining the DAtA or AC next year but they are very popular committees so it might be hard to get in. But I will try, definitely.

I was wondering, why do you think we chose you for AI*? Did you expect it?

I didn’t expect it at all. Appie proposed to have dinner together with the WkC before the CognAC Evening. The evening before, I mentioned to Daniel that I might not go because I had an exam the day after. He started freaking out and telling me I should go so then I got to thinking maybe… But still, I didn’t expect it. I guess I got it for the WkC and like FC and overal. Which is right :)

Anything you want to say to CognAC?

I just love CognAC! I really love it, it’s really great. Congrats to new candidate board! I’m really happy for you guys.

Something completely different, do you have a favorite movie or TV show?

I love watching series, more then watching movies. Movies take so long and with a serie you can just watch one episode a day. Movies is a big commitment haha.

I see you have a AEGEE hoodie, how did you start with AEGEE? And what is it?

AEGEE is a student organisation which is a part of AEGEE Europe. You have a lot of AEGEE locals in a lot of different cities. The people just travel and visit each other and it’s all about traveling. We have a lot of exchanges, I met a lot of people through AEGEE. Even when I’m traveling by myself to a foreign country, I can look up the AEGEE contact and they can usually arrange a sleeping place for me at an AEGEE local. Basically coach surfing but everyone is a student and loves traveling.

Are you thinking about maybe joining the AEGEE board next year?

I try to pressure Chris to consider it more seriously but he is still doubting. That is why I inserted the poll below where you guys can vote whether he should join the board of AEGEE [vote yes pleaz]

I’m not sure if anyone said this before, but an alpaca? You can take it to every activity and then there is always an alpaca you can pet.

The interview had to be paused for a few minutes because I could not keep in my enthusiasm. I tell Chris how much I love alpaca’s and that we went to an alpaca show with the 27th board. Of course he already knew this but I didn’t care. I tell Chris how mvp he is and ask him which alpaca he is today (come by the board room to see the ‘which alpaca are you today’-picture). Chris is alpaca number 1: LEKKER CHILLUH. After this I explain to Chris what a ‘fresh chapsel’ is, it was a revelation for him.

Talking about alpaca’s, when you were growing up, did you have a hero and who was your hero?

I didn’t really have a hero, but I always admired my great grandpa. He told me a story once, back in the day when they didn’t have cars, how he visited his girlfriend by bike and it was like 80 or 90 kilometers. I really liked that, I will always remember it.

Did you maybe then have a favorite comic?

I’m not sure if you know it here, but Goofy & Max? I really liked it. Especially the intro, I really love that song.

So tell me a fun fact or story about yourself. I always remember your story from Berlin how you stole a cow.

A cow? No it was a horse haha. I don’t really like horses.

This was my que to rant about my hatred for horses which I’m very open about. But I kept it short, I don’t want to scare Chris. Chris finds it funny luckily. We continue.

Maybe something interesting is that I did a work & travel in Australia. I stayed in Melbourne for a couple of weeks and at some point there were the Austrian Open (tennis) and that is really big there. So al the hostels were fully booked but I had to find a hostel for the night. So everything was full, only the really expensive ones had room but I didn’t have the money. I had to take all my stuff and sleep on a park bench one night. I wasn’t cold, but it was a weird feeling. I felt quite homeless, however, it was luckily only for one night haha.

This was a questions from your fans: what do you say about people with big feet?

I have no idea what you mean by this haha. Maybe big socks? I have no clue.

I called Lennart (our anonymous fan) to please come and explain it. He came right away.

Lennart: this is from the time we were orientation parents and we were chilling on the orientation weekend. It was very busy there but we were talking about shoe sizes. And you (Chris) were talking about how much you hate it to buy shoes because they never have your size (Chris has size 47-48). Then Brame said: yeahhhh but you know what they say about people with big feet *winkwink* and then you answered: yes they have big socks. Brame and I didn’t know what happened to us haha, we laughed for so long.

Yeah I saw them! The design looks so cool. I will order one (I see you haven’t yet Chris :angryface)

Definitely a shout out to the Weekend Committee yes. WkC! And just a s/o to all CognAC’ers. Old ones, new ones, everyone. I don’t really do shout outs. Chris is above doing s/o… :(

This was the interview, any last words?