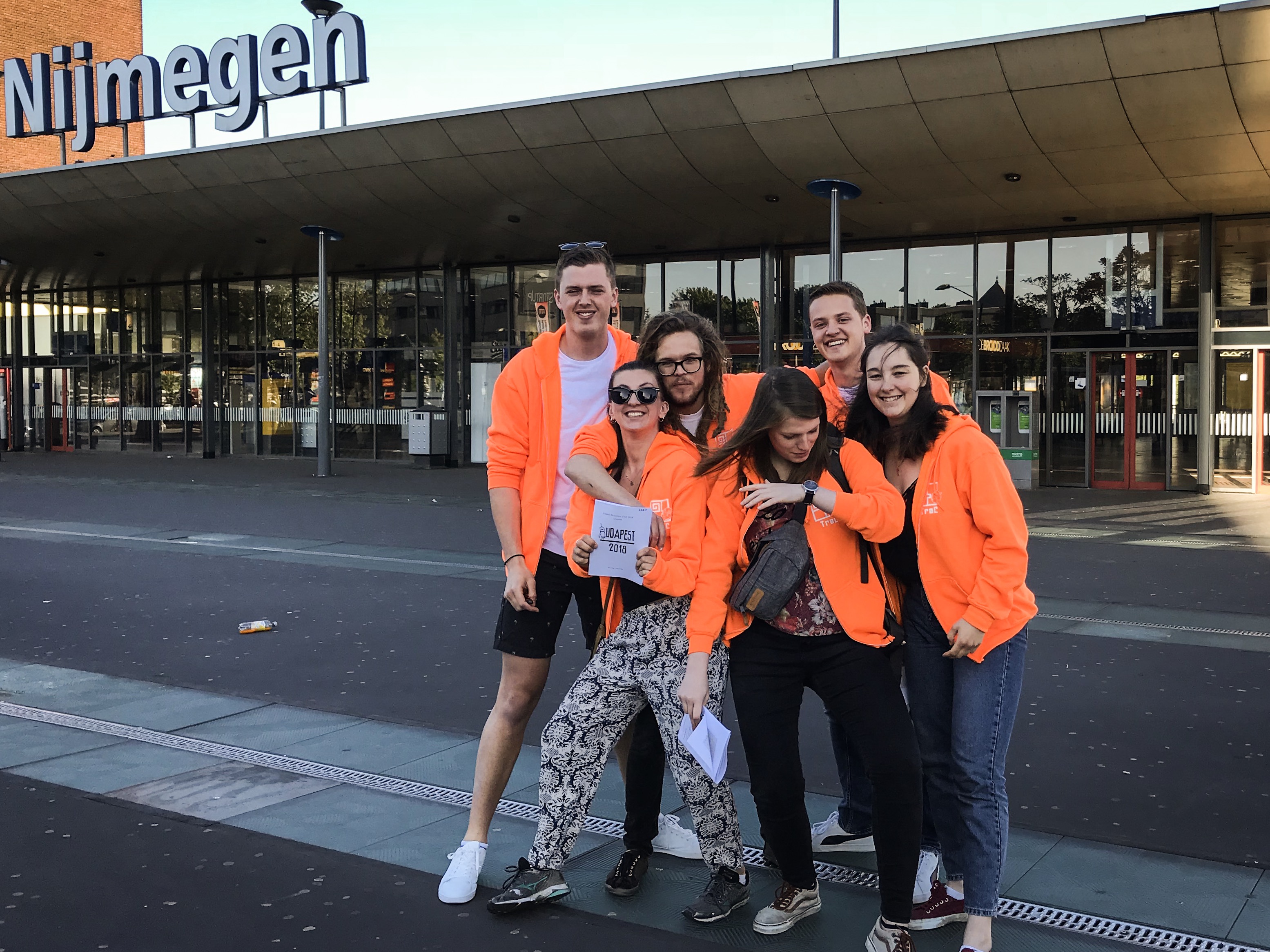 Every other year, the Travel Committee, also known as the TraC, organises a trip for the members of CognAC. Normally around 10-15 people join, but hypemeister Pleun, together with the rest of the TraC, made sure over 40 people signed up, within 5 minutes. After a long wait, the time finally came to pack our bags, and to prepare for what has become the best CognAC trip yet. If you read along, you will get to know how my week went, and what Heaven is made of.

On Sunday morning at, a for some people very rare time to be awake on, 8.30, we gathered at the central station of Nijmegen to travel to Rotterdam Airpoirt by bus. In the bus, we got our BudaBotBags, designed by our recently interviewed Chief of Internal Affairs, Karcie. In the plane the first trend started: sudoku’s, crossword puzzles and arrowords (also known as Swedish puzzles). This kept everyone busy, while we flew from our home country to the city of Budapest. After arriving by taxi at the hostel little later, unpacking our luggage and solving the last few puzzles, it was time for dinner. The Trac’s Chief of Food, Isabel, found a lovely restaurant in which the menus were screens below the table’s surface, which you could control with a mousepad located under the table. All intrigued by not only this technology, its impracticality and the food prices, we all ordered loads of delicious food before leaving off to either a park or a cocktail bar, where we mostly spent the rest of our evening.

On Monday we became real tourists, by doing a city tour. In this we saw a lot of famous street art, intimidating buildings and cozy cafes. We then left off to a Balabit. Balabit is a Hungarian security firm specializing in the development of IT security systems and related services that help businesses reduce the risk of data breaches associated with privileged accounts.Their customers include Facebook, NASA, Wallmart and Adobe. They monitor their users and create a profile, and as soon as they detect something the user would normally not do, this could be on the level of unordinary mouse movement or typing behaviour, the system acts upon it. After some jaw-dropping and hilarious presentations, we were set free by the TraC to get dinner, and we would meet on the Gellert Hill, on which you get an iconic view over Budapest. Here we took a group picture, on which two tourists decided to join for… some reason. Knowing some groups had to wake up early, not everyone partied until late.

The Tuesday was a bit different, because the company we were visiting today, AIMotive, could not host all of us at the same time. The first group had to get breakfast at 6.30 which went surprisingly smoothly, and we left off to the company. AIMotive is a global provider of vision-first self-driving technology. They utilise artificial intelligence, simulation and supporting hardware architectures for a safe autonomous experience. Here, we will got an introduction to the company, a presentation about the technology, and a vehicle demonstration! This meant we were able to sit in an autonomous car, that drove through a parking garage and parked into an empty slot, without interference. Because it was still so early, I tried to amuse myself by making awful puns the entire morning. Some highlights:

Well… let’s continue. We were meeting up with the second group after this at the zoo, in which we could walk around freely. I had the pleasure to walk around with the world-famous Jake Vonk, who knew everything about animals. After seeing plenty of animals making love, licking stones and ignoring me, it was time to leave for dinner. While on the walk for dinner, it started raining cats and dogs, but after a while we got our vegetarian meal. That’s a pun, thanks. In the evening our lovely TraC arranged a pubcrawl for us, in which we were among other things, able to drink unlimited shrek-juice for an hour. I will not go into detail about shrek-juice, but it was delicious.

On Wednesday morning we got some free time to catch up on some sleep and the much-desired puzzles, before we left off to the Eötvös Loránd University (ELTE), in which we got a lecture about artificial learning and the University itself, including a small tour through the building, also visiting “their TK”. In the afternoon we went to the Margot-Sziget Island, which we explored by golf cars. Prank. It was a quad-cycle, but still loads of fun. I had the pleasure to be on a car with Lennart, probably the best driving instructor out there. He gave Appie and me proper driving lessons, of which we had a collective total of one of in our entire life, before that day. I will never forget all the things he told me about always checking the right mirror six times, parking backwards and Thomas the train. We then had dinner near the hostel with around half of the people attending the trip, in a restaurant serving mostly classic Hungarian food.

The last full day has come, and that meant mostly relaxing. We went to a thermal bath at 8.30, in which we all had the time to explore all the things they offered there. I set foot in every single bath, and got my hair braided by Eva, so you could say my day was already complete. After a failed attempt of drying our swimming pants using a hairdryer, a couple of friends and I went to a food market which the TraC recommended us, where we got a delicious and very unique bread bowl, filled with goulash. We then went on to walk around the city and played some games in the park, before leaving off with everyone to an all-you-can-eat-and-drink dinner. After probably eating the most out of all participants and growing out of my pants on the spot, we want back to the hostel to play some games and pack our luggage again. Before we did this, we got some final announcements outside the hostel, including the winners of the photo contest. Who else, but my group, Rekarcie, could have won? After the most silent hype ever (we could not make any noise so we did a very silent hand wave gesture which was hilarious), we enjoyed the live music inside the hostel’s small pub. Our very own Ella, aka Mozarella, also played some lovely songs, and we even saw a guest appearance from rising star Sigur.

On Appies birthday, we went back to the airport, meaning more puzzles could be made. After checking in, I noticed I was placed on seat 1A, which turned out to be directly next to some very rich people, who I had fun watching (One of them even had a watch worth 30 yeary AI Bachelor tuition fees). When we landed in Rotterdam again, we gave the autopilot its deserved applause and went back home together by public transport. I bought some, a kilo, cookies in Budapest so I could hand them out during the trip back, but they turned out to be awful. We then played a game who could stuff the most in our mouth at once which resulted in basically everyone losing regardless if they could still breathe during chewing these cookies.

The fact that I sometimes had to grab the booklet (codex!!!) to check what we had done that same day, says enough I think; the trip was full of amazing memories and experiences, which I hope to share by this blog. I want to take one more moment to thank everyone who attended this trip for sharing this with me, and of course, the committee who made it all possible: the TraC! Thanks Lea, Pleun, Jake, Max, Isabel and Francesca! I think I speak for everyone when I say: I had a blast. Off to my Brain book again!