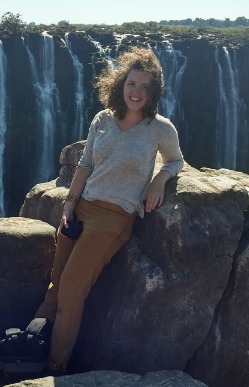 After frantically checking one final time if my phone was recording, I was ready. Of course, the person sitting next to me was born ready. This seasoned board member, intestine eater and traveller with ice cream in her hand and a big smile on her face is Daphne. I got the chance to interview her today! Read more about her interesting life below!

Welcome Daphne. To start off, tell us a little bit about yourself.

Hey! I am Daphne, 21 years old and I’m currently in the first year of the AI master, where I do the web and language interaction track. I grew up in Germany, but I have Dutch parents, which is why I constantly have an accent.

Ahh that explains your accent!

Yeah, because when I speak German, I have a Dutch accent.

The interview was held in Dutch, and hence I know Daphne also has a German accent when speaking Dutch.

So I don’t belong anywhere ☹

I assure her that Daphne definitely belongs with us <3

Do you have any hobbies?

I like cooking, and that’s a hobby that has really been growing. I used to be all about simple food, like pasta and tomato sauce, but it’s getting more and more fancy. One of my recent favourite recipes is an eggplant curry. Recently I also made a super nice sweet potato apple soup.

Shout out to all the vegetarians 😉

I also really like North-African food, so couscous and stuff. And cilantro is definitely the best herb.

We delve into a discussion about the fact that some people think that cilantro tastes like soap and that that is apparently genetic. I am also on #TeamCilantro for the record.

Speaking of food, what is your least favourite food?

Hmm that’s difficult, I just really like food. A few months ago I would have definitely said cheese, but I’ve really been enjoying some cheeses now. I recently enjoyed even a cheese fondue! My goal now is to eat something really intense, like camembert.

We delve into a discussion about camembert and gorgonzola.

Oh wait, I have something else! The worst thing ever is cow’s leg. I was once in Zambia, and apparently it’s a thing to eat there when you’re hungover. The people were really enthusiastic about it, and Zambian food in general is delicious, so I wanted to try it. But it was so gross… It was cow’s leg with cow intestines.

Daphne shows me a picture of what looks like mud and cow poop, with the occasional bone sticking out of it. I make really loud and gross noises on the recording.

I have a dog, and his food smells exactly the same. The next day my sweater still smelled like it. I could handle two bites, after that I almost had to puke.

How did you get involved with CognAC?

In my first year I just thought it was nice to join activities. I was the only first year to join CognAC evenings! It sounds kind of sad, but actually it was really nice and ‘gezellig’. At a certain point I thought “I want to try some more”, so in my first year I joined the living monopoly committee, which was my first CognAC committee. That was nice, but afterwards I just really wanted to join the living monopoly myself, instead of organizing it. In my second year I joined the media committee as well, and I became an intro parent. In my third year I joined the MC again as well as the PaparaC, and now I’m actually only in the master committee. But whenever there’s a fun activity I’ll join!

And as I understood, you’re not just active within CognAC, but also within Kompanio. How did that come to be?

Yes, so I used to think about doing a board year for CognAC, but I was like “nah I don’t want to delay my studies”, and around that time Kompanio started to become a thing. I heard about it via Berend and Appie, and I joined the buddy project of Kompanio (According to Daphne, you should also join the buddy project!) so I had an international buddy. I really liked that, and in general I like getting to know people from other studies and associations, so then I joined the board of Kompanio. It’s just a bit less work than a CognAC board year, but still really fun! I really like that I got to know people from for instance anthropology or sociology because they’re just so different. You also really start to ask yourself: how is AI a social study. There is so much programming!

What was your position within the board?

Chief of Formal Affairs. That means I had contact with the faculty, so the faculty board and the assessor. For example, for the construction of the new building, I had to make sure that everything was communicated properly to our member associations. Actually all faculty wide things go via Kompanio, and more specifically my function, like new alcohol regulations. But I was also responsible for the organizational side of the buddy project, oh and also for the organization of the job market activities, although we didn’t have that many. But they’re coming!

I also heard that you’re thinking of doing a year abroad?

Hmm from who did you hear that?

So yeah, I’m going to Canada, I’m super excited! I’m gonna be so cold… They have trimesters, instead of semesters, so I have to start on the 3rd of January. I’m going to Newfoundland, and from a fellow AI student who went there in April I heard that the first weekend she was there, there was no electricity because of a snowstorm. In April… So I don’t think I’m going to survive. But I’m still looking forward to it!

What are you going to do there? Do they have an AI program there?

No, they don’t have a specific AI program, but they have both psychology and computer science programs, so I’m just going to follow some of those courses. I actually got to meet one teacher already, because he recently gave a Good AIfternoon talk. He seemed like a chill dude, who can make really funny facial expressions. I also want to do an internship there, well actually somewhere else in Canada. I think St. John, the town where I’m staying, is pretty secluded.

It is still the English part right?

Eh yeah I don’t speak French… But Nav, who is from Canada, does say that the Newfoundlanders are basically the Limburgers of Canada. I’m not sure what she meant by that…

I guess that’s dependant on what you think of Limburgers?

Do you also know what kind of internship you want to do?

What kind of other committees would you like to do in the future?

I really want to join the SymCo, but I’m in Canada during the symposium, so I don’t think that’s possible. I also want to stay in the MaC, but I also want to have a side job doing programming. Something random I would like to try is studying body language, like smaller facial expressions. So I also want to follow a course on that at some point. Hmm maybe I can even combine that with AI, like making a robot that is capable of recreating those smaller facial expressions, which makes it look more social.

Traditional question: what is your favourite Disney movie?

Daphne takes a bite of her ice cream and it starts dripping all over her hand. This was of course a plot so she could go wash her hands and take time to think about this incredibly difficult question.

Yeah there is a second Lion King movie and no one knows it but I think it’s really cute. It’s about the daughter of Simba and the son of Scar, and how they fall in love. It’s a forbidden love, so cute.

Another traditional one: if CognAC should get a pet, what pet should they get?

I really like dogs, giraffes and elephants. But those are not good pets for CognAC.

No, a dog would be too sad in the board room, you could maybe walk the dog in the indoor garden? That’s still sad though.

Maybe it should be that robot seal, called Paro.

I look at her questioning, so she explains.

It was made for people with dementia, it’s really awesome. If he gets petted, he’ll start moving and making sounds. He can also recognize the voice of his owner.

She shows me a video of Paro and my cold, dead heart melts.

I got to pet it once, I was sold immediately. And it’s super smart, because when the battery is almost empty, it will go charge itself, because the people with dementia will forget that. It’s really cute and it’s a robot, so I think that fits very well. It does cost €2000 (?) though. But if CognAC has money for a cargo bike then you can also set money aside for Paro.

It’s time to wrap up already: any shout-outs?

Oh and of course a shout-out to Niels, my Kompanio successor!

This was recorded on the day of the announcement of the new Kompanio board, so this was very exclusive information… for only a few hours.

Maybe I’ll find an inspirational quote and send it to you.

As you may have guessed, she didn’t. Also I thought this was funnier.

Thanks for the great interview, Daphne! I really had a blast interviewing you, and I feel like I got to know you a little bit better. Good luck surviving the snow in Canada!

To the reader, thanks for making it this far into the interview! If you have a suggestion for the next AI* you can send it to secretary@svcognac.nl.