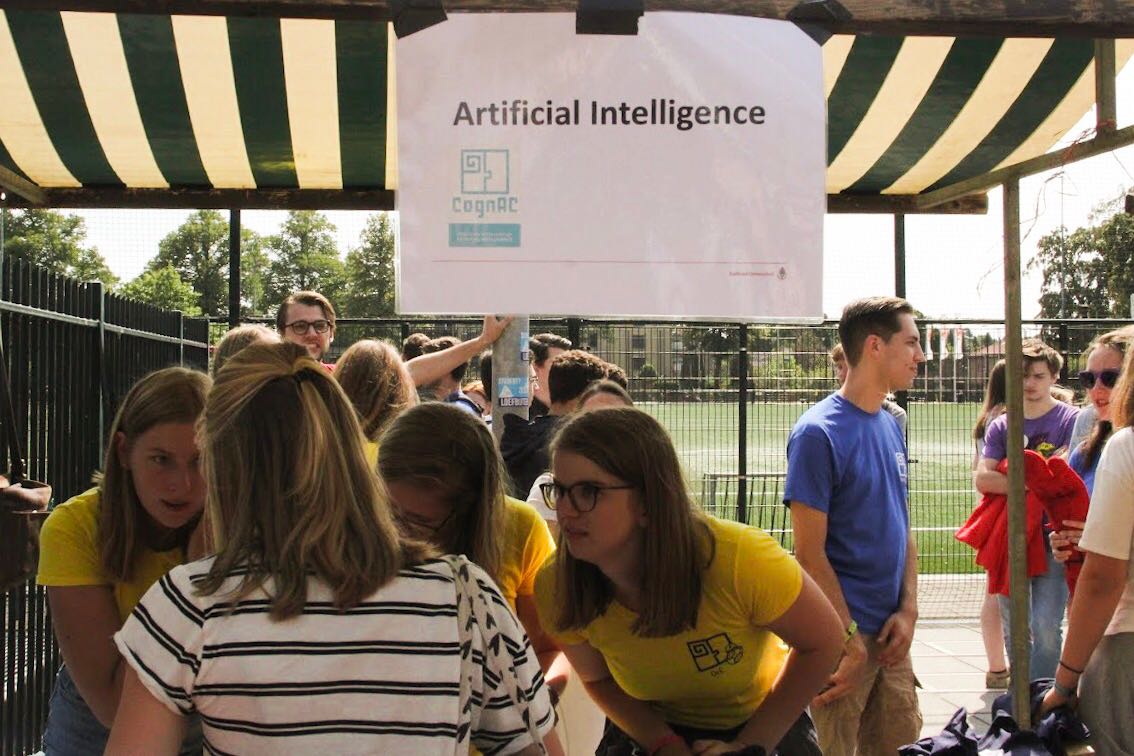 As usual, the Orientation week started on a Sunday. The fresh new students had to register at the Sports centre where their mentors for the week, together with the people behind it all, the OrC, were waiting for them. Once a group was complete, they sat down in a somewhat more quiet spot to play some games in order to get to know each other. Vague Victor, two truths one lie and the prejudice game could of course not be missing on the first day. Afterwards we had a short introduction talk by Ellen, the Chairwoman of the OrC. Here she addressed the main rules and practicals of the week, together with the Annual Mascot Game. Being hungry and excited for exploring the city, we went to all kinds of associations to have dinner. Afterwards we collected at the Grote Markt, where the Pub Crawl started. During the Pub Crawl, we played the classic games: Card-Kissing, Charades, the Knot-Game and Pictionary. Finishing second out of all eight groups, it was time to enjoy the night: some people went home, and some people went to Carolus Magnus for their first 50 Cents Beer party of the week.

On Monday morning, we had a talk by Frank Leoné, Nav, Erno and Fabian, in which they talked about student life in Nijmegen and AI and its pitfalls. Then it was the time to shine for the new board of CognAC: they got to do their first speech, introducing our study association. Everyone then had lunch together with all our staff members which helped them get acquainted with the program and the people supporting it.

After a nice lunch, our new students participated in the Scavenger hunt. They had to play a total of 9 games, guided by 9 of CognAC’s committees: the AC, 1C, Party&Co, SpoC, DAtA, PaparaC, MC, SC and FC. This way the students could get acquainted with the committees while also discovering the university campus. The goal of the Scavenger Hunt was to visit as many games as possible and obtain the most committee logos. This was quite a challenge, with locations varying between the Huygens building and the Grotius building! We as the MC also had a hideout, where only three groups managed to find us, including the winners of the hunt.

Directly after group 8 got crowned as the Scavenger Hunt winners, we all went to the introduction market. Here all student- and sports-associations can have a stand to introduce themselves to everyone studying at the RU, and most of them even hand out free goodies ;). We then sat down for a long while at the Huygens Building, to enjoy our dinner prepared by the OrC accompanied by BBQ-Meister Lars. We spent the rest of the night at the campfire on ‘het Waalstrandje’ in which we burnt a total of three cubic meters of wood across eight campfires. It was a nice night with a guitar, a good game of psychologists and some intermixing of the mentor groups. Some people extended the evening by going to Ovum Novum, for the second 50 Cents Beer party of the week.

When I say Tuesday, you say Sportsday. All groups started in the Radboud Sports Centre (RSC) where we got some demonstrations and a warming-up exercise. Then we all scattered around the RSC to play all kinds of sports: ranging from hoopdance to waterpolo, and from sailing to survival. Being all tired of the day, everyone went home to change and shower before the movie night, where we would watch the annual CognAC Movie and Blade Runner. Special shoutout to group 3 of AI: they managed to grab a prize for winning the sportsday! They are allowed to go Discobowling with their entire group: Congrats!

Some people hurried to the supermarket afterwards to get some drinks, and we all gathered in the Kronenburgerpark for a very laid back evening. The people that felt like it went out to El Sombrero, where Phocas hosted their own party.

Wednesday morning we finally got to have some extra sleep after three long days, as we had an optional Brunch next to the Spinoza Building. Around 15 students also went to the International Office lecture, where they got introduced to Dutch culture and the best ways to deal with the change. Nimma44 was next on the planning, which meant randomized groups of students doing the weirdest tasks. From dressing up as a hippie to chasing someone for 5 minutes, everything had to be done in order to gain the most points. As a nice bonus, a student from my group got his bike back from a low-key streetgang chilling in the park, the same bike that got stolen the night before. We headed back to the Huygens Building for the Chill evening, where we got to have fries and snacks, and played cards, wii-games and beerpong all night, before going to the park again.

Thursday morning might have been the least fun of all, but certainly the most important: the IT prep. Here all new students got to log into their student account on the RU computers, their mail and checked out their personal schedule. People that still had problems with their accounts went to the C&CZ, if you still have problems make sure to drop by there asap!

Having some time spent in the canteens because the IT prep was shorter than expected, we went to Spinoza again for some workshops: programming, discussion, first week essentials and lateral thinking.

We spent the afternoon with How To Be A Student (H2BAS), where we all got to have dinner at an AI student’s place, at a budget of 2 euros per person. In other words: go over budget, or eat wraps/pasta, easy as that. The most important part is to get sufficient food in your stomach before joining the Cantus or BeestFeest anyway, which is exactly what we did afterwards.

Most first years got to experience what it is like to participate in a Cantus, and it was a great success. The OrC did an amazing job at fitting everyone in the Next Level, and everyone had a good time.

Next up was the BeestFeest: the biggest party of the science faculty. The BeestFeest takes place every two months at the Doornroosje and it is well-visited by students from Artificial Intelligence. It was a lot of fun to welcome a lot of first-years at our special “CognAC corner” (right corner when looking at the stage) and we hope to see them at the next BeestFeest!

Friday means start of the weekend, and the weekend featured the all-new festival this year. We had to leave with the bus, taking us to our location in just a bit more than half an hour. We then had to queue up for at least another half hour, before we were guided to our tents. We had to sleep in large tents with wooden floors, laying very close to one another. Cozy!

The weekend contained all kinds of fun activities: a lot of associations organized activities across the weekend, ranging from dream-catcher workshops to watching movies. Jake and Lennart managed to win the “Find Wall-E” activity, winning them a free trip on the pancake boat! Congrats! Also some freshmen from group 6 won their mentors a BBQ at the RAGweek pubquiz. There also was another cantus, this time not guided by AI students forming a praesidium, but by a band. Halfway during the cantus, the power of the tent went out so it was suspended for a while, but they managed to fix it. This was the very same tent as the tent where Nick, also a student from group 6, managed to sweep up the crowd by singing All Star from Smash Mouth, barely making it to the second couplet before getting kicked of the stage. Legendary performance.

On Sunday we headed back to Nijmegen after spending another 2,5 hours on just waiting for a bus. The bus was an adventure on its own by the way; we spent a minute ghostriding and parked somewhere in the grass.

The amazing orientation week of 2018 was closed off by Ellen in Next Level, where we had our last drinks and conversations together before the academic year started. Here she also announced the winners of the Mascot Game, group 3! The group with the whale will be visible all year in the TK, our final congratulations!

We also hosted a closing party in the Drie Gezusters, but I think we all, apart from 8 enthusiastic people, were too tired to even walk there.

All in all, it was a worthy introduction to student life and AI at the RU, and we think we speak for everyone when we say we thoroughly enjoyed it. We hope that everyone caught up on some well-deserved sleep because it’s time to start the study-part of the year. We wish everyone the best of luck and don’t forget to have fun at nice activities that are offered by CognAC