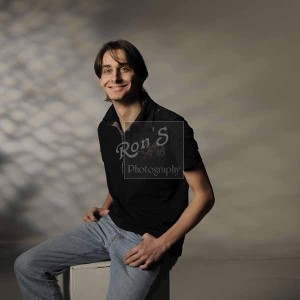 Where do you come from and do you have siblings?

“I grew up in Goirle, a village near Tilburg, and I lived there till I started studying and I have a twin brother.”

“Actually, we were always having fights when we were younger, but when we were placed in a different school class it got a lot better! “

Why did you decide to study Artificial Intelligence in Nijmegen?

“I had a friend who decided to go study AI and he I went with him to an open day. I immediately found it totally awesome so I subscribed. That friend quit after a year, but not me!”

What makes you liking it so much?

“It’s multidisciplinary. I like the fact that there’s freedom of choice in projects and that it always keeps the connection of programs to people in mind. Within this study, you can focus on the things you like. Apart from that, I don’t like studying until I know the details about everything and thus have difficulty doing this. I am most of the time satisfied when I understand a topic and hate learning more after that.”

But there must be a course you like! Do you have a favorite course?

“I liked ‘Robotics’ and I like programming when the project where fun, for example we are now working on swipe in virtual reality with ‘Advances and human computer interaction’.”

Swipe in virtual reality? How does that work? Is it like typing in the air?

What AI field would you like to get into in de future?

“Robotics! Right now I am searching for a project in developmental robotics. I want to go to Iceland and Norway because I really want to go there, but there are no fun research projects there.”

Why those countries?
“They are beautiful. But when going there means working on a shitty project it is not worth it.*

Do you have alternative places you want to go to?

“For developmental robotics there is the possibility to go to Japan, but I don’t have so much time left to arrange it all so that’s not possible. And Spain has something nice. And England is a possibility. And Italy.  And I also can still choose if I want to go 3 or 6 moths.”

What are you going to do after you finish your master?

“I don’t know. I don’t know if I want to do a PhD or work at a research company. The thing I do know is the kind of research I want to do. The only problem is reading papers. I spoke with Johan (AI teacher) about that and he said that they become interesting if it’s your field of research, so that will be all right I guess.”

When did you become an active member of CognAC?

Which committees are you in now?

“RC (travel committee), I was in it last time and it was super awesome so I choose to be in it again. I am in the MaC (master committee) as well, I want to give that one a vibe! That’s hard though because people do not take effort in to joining activities. I met AI people last year who where new in Nijmegen and they became my friends and I’m trying to make them go to activities more!”

What is the most fun committee?

“I have no clue. I liked my time in the MC (Media committee). It was nice because I was in it with friends. The MC was always the coziest one. I also liked the SC (study committee), because it was study related.”

You were in the board as well. Why did you become a board member last two years ago?

“I only needed to write my bachelor thesis that year, so I figured that would be a nice combination with the board. That thought was a bit naive though. After half a year of being busy with CognAC I didn’t even start with my thesis yet!”

“Actually, at first no, but only because I thought my student public transfer card wouldn’t be valid anymore, so then it would have caused a lot of money. However it turned out it would be valid for another year so that changed my view on it.

In the end External officer was a good choice; it made me a more social person. Not only because of the communication with companies, but you also need to be able to communicate within the board, also when it you don’t agree with each other. Since my board year I’m less motivated. During the year I took rest whenever I could. I do that still, only now with bigger periods of time.”

Do you have any further work experience?

“I did student assistant things.”

So during high school you didn’t have a job?
“No I didn’t really need it. I was not in to going out, so I didn’t spent money on those kind of things.”

What did you do next to school?

“I did a lot of things, but I wouldn’t claim those to be very productive. I used to program a lot of games, but I also threw them away because they were kind of crappy.”

Not productive? It thought you how to program!

“Yes, ones I modeled the whole school and we rode through it with a car. We didn’t finish it though because the school wanted it to be more educational, so we made a whole programming workshop out of it. It was our final project (“profielwerkstuk”) and we got a 10. Or actually a 9.5, because we gave the project a different functionality then the teacher wanted us to.”

That’s a high grade (and a cool project by the way)!

“Overall my grades were not so well though. The way I see it, you don’t need to know all that stuff. You can look everything up, so as long as I know how to do that I’m fine. Knowing is something different then understanding.”

Do you have any new projects in mind?

“Yes, I have a big list of things I want to do still. For example I want to light up my room and control it with hand gestures or something. I worked out the project completely, but I still have to go do it.”

Do you have other hobbies?

“I play chess a lot. That’s the biggest thing that keeps me from studying. And I like ballroom dancing.”

Are you part of a chess club?

“Yes two. One at my hometown and one in Nijmegen. Right now I play around three games online a day.”

Do you have ambition in chess then?

“Not really, It would be nice to pass 2000 rating points, but that would take a lot of training!”

What about ballroom dancing?

“I usually train with Margo, she was in the board with me. This is the second year we are training. We try to train once a week, but in practice it’s a bit less.”

Now, the two final questions: What is you guilty pleasure?

“Disney songs! My dad is a fan of the drawing so we always watched the movies.“

What pet would you give CognAC?

“A dog. Because it is loyal and if you need it, it will always be there.”