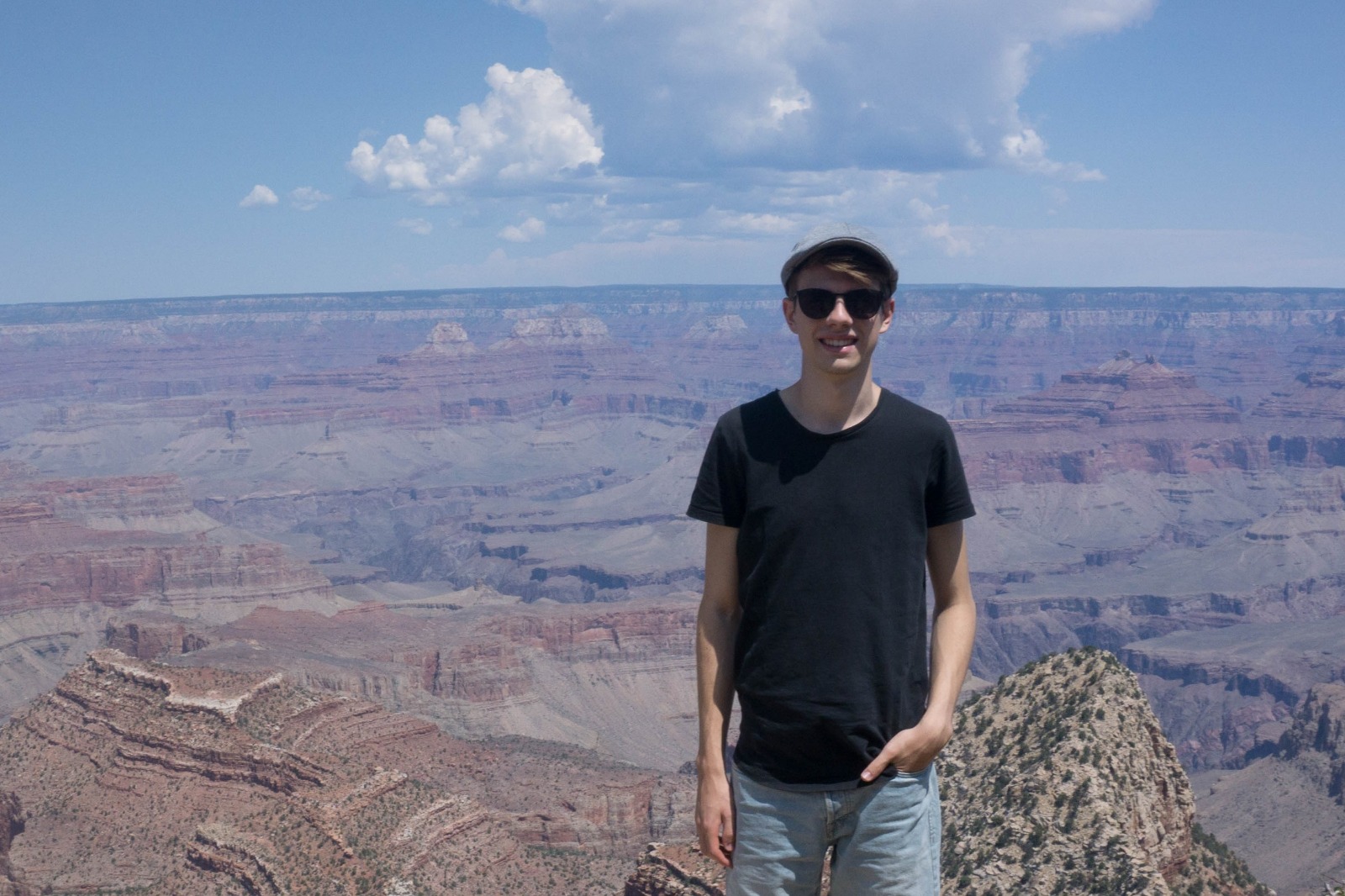 As Thomas is an early bird with getting out of bed, we can get started with the interview nicely on time. We first talk a bit about how this is Thomas’ first public interview, if you don’t count application interviews, and then we get started.

Welcome, can you firstly introduce yourself?

Furthermore, I am from Hoorn (for people who don’t know the place: it is further than Amsterdam, in Noord Holland, quite far away: 3 hours travelling), and I like playing video games on my PC.

Which video games do you mainly play?

I play every kind of game, because playing only shooter all the time might turn me crazy. At the moment I play Apex Legends, like probably half of the gaming world.

Nice! Do you also have such a PC that people brought to the LCN (League of Legends Tournament Nijmegen)?

Yes, from that size indeed and I also have a very big screen. However, I would not bring it, but only move it when necessary.

I saw on your profile picture that you also play the guitar?

Not that often anymore now, because I focus more on my study. I passed everything except of mathematics now, which is fine, but my grades could be a bit higher. That way the waiting period till you receive your grades is more relaxed as well.

On the picture of this interview, it seems you were in America?

Yes, at the Grand Canyon indeed. Last summer we made a trip to amongst others: Los Angeles, the Grand Canyon, Death Valley and Disney Land. We also wanted to go to Yosemite but there were forest fires so we could sadly not stay in a big tent there during the night. Thus, we went into another direction.

I also really want to go to America in the future.

I went there once earlier, on exchange. There I slept a week at someone’s place in Boston and then I also went a few days to high school with that person. The latter was not very interesting, but nevertheless fun to see the school. During the exchange we also went to New York, which is enormous and there are so many people. If you think Amsterdam is busy, then New York is even way busier.

Is Disney Land there different than the one in Paris?

In America it was very nice, but long waiting times. I went to Paris twice and that one is quite similar. Some attractions are just copy paste or almost similar, but the layout of the parks is very different.

You have probably been to more places, so what is the nicest place in the world you have been?

Definitely Norway. I would need to say a specific mountain top, but I don’t know that. When we were there, we did many hikes through the beautiful nature. You should definitely go there if you like hiking. It is just fantastic if you are on the top of a mountain, specifically the fjords more in the south I really liked.

I also really want to go to Scandinavia, have you visited more places there?

I have also been to Sweden, which was very nice. However, Norway was even better due to its nature and the many mountains. Sweden is much flatter, surprisingly. Though Scandinavian countries are not cheap, they are very cool.

Let’s also discuss a place closer by. Do you have any specific reasons why you chose for AI in Nijmegen?

At the end, I doubted between Utrecht and Nijmegen. Utrecht is slightly too big for me and a bit more expensive. Additionally, the atmosphere here is nicer and more relaxed in my opinion.

Amsterdam was the closest university city, but too busy for me. Everywhere further than Amsterdam, I would need to get a room, what I also wanted.

It is nice. The most difficult thing, however, is doing groceries and thinking of what to cook for dinner. I mostly do it for a full week, so I don’t have the struggle each day.

Do you also have a specific recipe for when you don’t know what to cook?

Just wraps with chicken or something basic like that. With this you don’t have to cook anything difficult as well. I like cooking but getting up from your place and starting is not always that nice.

How often do you undertake the travel back home?

Every weekend, because then I can be with my girlfriend as well besides visiting my parents. We might look for a place here in Nijmegen together next year.

That would be lovely. Back to AI, do you have specific fields you are interested in?

I don’t know yet. But what I do know is that only programming would be too much programming for me. Maybe I would like to do something with consulting about AI or designing new AI systems, but that is very vague and broad. I am also interested in the psychology behind interactions between humans and AI. However, I don’t know all possibilities yet, so a specific vision will follow later.

Now on to CognAC. How and when did you become active within CognAC?

Directly from the start, during the orientation week.

Proud intro parent here :). I did not expect differently from Thomas than him becoming active.

I always liked organising things, so it was a quick decision of doing something nice with this within CognAC. You can see these organisational roles very well in both my committees: LoLCo and OrC. Organising such a tournament is just very nice and I am organising the orientation week because I thought myself that it was amazing. I want to give that nice feeling to others as well. Though, I must admit that I don’t often go to activities of CognAC.

That is what I really like of CognAC: there are no obligations and one can take from it what they want.

Exactly. An activity you like must also just fit well in your schedule. My day is already quite full of lectures and studying, so then I don’t always want to go out in the evening for an activity. I am more the type of person who also likes to have a nice relaxed evening on my own.

That I can understand well. What did you think of the big activity you organised, the LCN?

It was very nice to do! Of course, it was also a bit of chaos with at the start a power shortage, but we fixed it. And now we are thinking about how we view next year’s LCN. We feel that the 24 teams we had is also around the maximum capacity, so no clue how they could fit even some more teams in the URD last year.

It was very good you solved everything, and it was a very nice event where you could also just go to for watching and relaxing. I liked it a lot. How was it to chair the committee?

Everyone put effort into making the activity a success and solving problems, which was nice. Chairing this committee was great, and I think this was the best function for me. I had the overview and I am also a person who likes to have that. I think I want to do it next year again, possibly as Chair, but we will see then.

You also need to have quite some insights in the game I noticed when people came to you and asked something of which I did not understand half of the words.

I first thought that the LCN can be like organising every other tournament, which is somewhat true, but you also need to have some knowledge about the game. Having someone in the committee who knows about making a tournament for example is valuable.

I also want to compliment on organising the LCN well without someone with LoLCo experience in the committee.

Thank you. At the start it was a bit difficult, but everything went well. Also, at the evaluation meeting I asked about my role as Chair. Here it also came up that I was firstly searching for the balance of how to do things, but that it went well.

We are a bit comparing the role of committee Chairs and the Chair of CognAC. To be honest, I still need to become the first one at some point.

Do you also have other committees or something else at university you consider doing in the future?

Not necessarily. WkC and/ or SymCo would be nice, I think. Organising small activities is not really my thing so then I prefer organising an event that is once a year.

I also notice that being in two committees, OrC and LoLCo, is enough for me. At some point it was quite much, mainly next to my exams. Next year I will see what I will do, I go open into that. Furthermore, becoming a TA would be nice.

We also talked about organising the SNiC, a very big national symposium we will organise together with Thalia (Computing Science) in 2020.

Is there a specific TA ship you want to do?

I don’t want to do Mathematics or Formal Reasoning because I am not very good at it and that kind of abstractness is not really my thing. But I would like to do something as programming, robotics or something similar.

We’re almost done now, but I want to ask you a certain question still. I am curious what you will answer. What do you think CognAC really needs? This can be a pet or a bouncing castle or something completely else.

No clue… I think you need to have some pet as mascot! That belongs to an association. I think a dog fits CognAC best, because dogs are just cute. Dogs are not the most ideal pets though because you need to walk it, so for example fish would be easier.

We’ve had fish in the past. Even though it can be hard, a dog is also a good option because then we get out of the board room to get some oxygen more often.

We’ve reached the end of the interview now. Do you have any final words or shout outs?

No not really, I also don’t really do shout outs.

Me neither. Thank you for the interview!

Thank you again Thomas for your contributions to CognAC and for the interview!

To the reader, thank you for making it this far into the interview! If you have a suggestion for the next AI*, please send it to secretary@svcognac.nl.